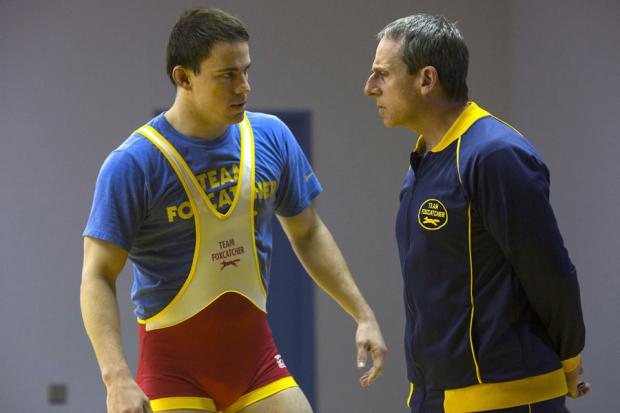 “The following is based on a true story.” I’ve come to dread seeing that sentence at the beginning of a film because it means I have to deal not only with what appears on screen but also its fidelity to the events the film is based on. And who wants to have to do all that work?

Foxcatcher and Wild, both opening this week and both Oscar contenders (it’s that time of year), are based on true stories. Of the two, Foxcatcher is more fascinating as well as more maddening.

It is based on the story of millionaire John du Pont, of the du Pont chemical family, and his involvement with Mark and Dave Schultz, brothers who both won gold medals for wrestling in the 1984 Olympics. You may know the outcome of this story, which occurred in 1996. I didn’t when I saw the film. I’m not sure if viewers are expected to: So much tabloid sleaze has come and gone in the ensuing two decades.

Does it make a difference? In this case it does. The film is the product of producer-director Bennett Miller (Capote, Moneyball, both also based on fact), who spent years researching it before turning his work over to two consecutive scriptwriters (E. Max Frye, Dan Futterman) to mold to his satisfaction: That Miller isn’t also credited as the writer is probably mostly due to Writer’s Guild directives. It’s his baby all the way. And a thought that started nagging me about halfway through the film was that maybe Miller was so involved with his story that he started taking for granted that the audience knows much more about it than we do.

At its best, Foxcatcher is clinically observational. We start by watching the dull daily routine of younger brother Mark Schultz (Channing Tatum). Two years after Olympic glory, he lives a directionless life, working as an assistant to his older brother. Dave (Mark Ruffalo) is the one whose talents aren’t limited to what he can do on the mat. No wonder that Mark believes everyone credits his medal to his brother’s coaching.

Mark is lifted out of his doldrums by an invitation to live and train on the titular estate of John du Pont (Steve Carell), a patron of sports who wants to back the underfunded US Olympic wrestling team. It’s a dream come true for him, and he jumps at it. Does du Pont strike him as a bit odd? Mark isn’t one to notice: People skills are not his strength.

All three lead actors wear facial prosthetics to make them resemble the characters they’re playing. That’s not always a good idea; often they simply make actors look bizarre without turning them into convincing replicas. In this case, it’s unnecessary because few viewers are likely to know what du Pont and the Schultzes looked like. Still, it benefits Carell, whose performance is what gives the movie is creepy power. It’s less important that he look like the real du Pont than that he look less like the familiar funnyman. There’s nothing comical about this guy. With an even more prominent nose than the one Carell was born with and dead eyes staring over it, du Pont looks like a bird, unfathomable and potentially fearsome.

You may or may not know where the story is heading (I won’t say), but you know it’s nowhere good. So as Mark strives to please this new father figure only to be supplanted by his brother Dave, we start looking for signs of stress. Abstentious Mark is offered cocaine by du Pont and we think, aha!, the beginnings of drug abuse. Well, not really. Mark and du Pont bond over their lonely childhoods and we think, aha! he’s a gay predator. No, it doesn’t really go there either.

Or maybe it does. Honestly, by the time Foxcatcher gets to where it’s going, we realize that we’ve gained little more insight into these events than we had going in. Two of the three participants are now dead, so we’re not likely to get more than this. I don’t mind a certain amount of ambiguity in a film, but Miller is so restrained about offering hard information that he won’t even tell us the results of the 1988 Olympics that so much of the film moves toward—we have to figure it out from context. Tatum, Ruffalo, and Carell are all compelling in constrained parts, and it’s impressive what they and the director can do without words (an early scene of the brothers wrestling will end up being replayed endlessly in film schools). But in the end all of the cool weirdness leaves you more than a little frustrating.

Much more conventional, as least by comparison, Wild is based on Cheryl Strayed’s memoir of her 1994 hike along the Pacific Crest Trail, which extends for 2,663 from Mexico to Canada. Strayed (played by Reese Witherspoon, who also co-produced the film, in an effective act of image-adjusting) was not an experienced hiker, and she doesn’t seem especially well prepared for such an arduous trek. But she undertakes it as an act of will, expecting it to be physically punishing, to confront and exorcise her demons.

Those demons, seen in flashback as she trudges along, were, I’m sure, hellish for Strayed to have lived through, but as filmed by Jean-Marc Vallée (Dallas Buyers Club), they just don’t seem all that awful. It’s unfortunate that the film reminds of both Into the Wild and 127 Hours, both recounting much more distressing wilderness journeys. Wild is at its best not when it’s trying to persuade us how bad Strayed’s life was but when it focuses on the alternately grim and dull slog of a three-month walk—now there’s a triumph.