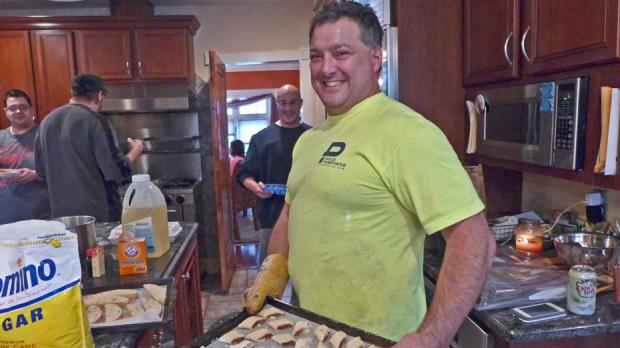 Knocking with the elegant and heavy doorknocker at the home of Senator Marc Panepinto and his family on Bidwell Parkway, the sweet scent of baked goods is somehow, miraculously, wafting through the front door. Natasha, age 13, answers the door.

This is their family cookie-making day and I am invited to come and participate. Full disclosure: I was hired to make images of Marc this past summer for his campaign. There were several wardrobe changes (as is done for this type of shoot), moving from location to location (throughout the extremely far-reaching 60th District), and friendly cajoling on my part to get the candidate to smile. Dolce-Panepinto, his law firm, hired me recently to make portraits of their principals; during these sessions, the subject of Italian cookies, specifically Sicilian cucidati, came up.

Cucidati, small rolled cookies with a fig-based filling, are glazed or frosted and finished, usually, with colorful sprinkles. They are divine. They can also be divisive: how much citrus in the filling, the shape, what type of liquor might be added to the ground dates/raisins/nuts. They are also said to be quite an undertaking, so many families bake together to lessen the workload.

Beyond the front door, in the foyer of the Panepinto home, is a large folding table covered with loaves of biscotti, cooling after the first baking—and about to be neatly sliced by Marc’s brother Don. To the right the dining room table is covered with cucidati, a group of girls seated around the table with bowls of glaze and shakers of sprinkles.

Rushing between the kitchen island to one of two ovens teeming with trays of baking cookies is the 60th District’s new senator, in shorts and Dolce-Panepinto t-shirt. A quick greeting and he’s headed into the dining room to add more cucidati to the table. Firm partner Sean Cooney has dubbed Marc “SantaPinto” for his love of Christmas. “Yeah, Sean started that, that bastard. No, it’s funny,” says Panepinto.

Among the several family members around the long kitchen table is Lucy, Marc’s mother, in Santa hat and snowman earrings. She estimates that she’s been baking for 50 years. ”They’re hard to make,” she says of cucidati. “We’re making Aunt Mary’s recipe.” Her son hands me the family’s photocopied recipe which yields 60 dozen cookies.

Panepinto is moving constantly between rooms, depositing newly baked cookies to the two tables while also watching the Bills game on in the family room off the airy kitchen. Then he’s making more glaze at the KitchenAid. Other family members tell me that they’ll be making 10 types of cookies in all. Today it’s biscotti and cucidati and then they’ll begin pizzelles, working with two pizzelle irons. After that it’s dinner.

“I’ve been cooking with my mom since I was seven or eight,” Panepinto says.

“I would say you were five,” Lucy says. “We’ve always cooked and baked together.”

“I always baked with my mom, I was always underfoot. I give out 50 or 60 tins of cookies to clients, judges, other lawyers. And now I’ll give cookies to Senate colleagues—there are 25 in the Democratic caucus.”

Panepinto will be officially sworn in twice: at an unofficial ceremony locally for family and supporters, and then on January 7 in Albany. Presumably there will be cookies served with the champagne.