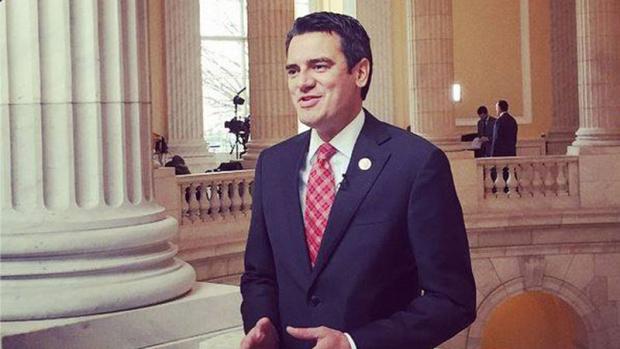 It always ends the same way. We avert a government shutdown at the 11th hour. But once again we suffer a shutout loss for democracy. This movie re-runs as predictably as Jimmy Stewart graces your TV on Christmas day. Republicans bring us to the brink of chaos, threaten to burn the house down; Democrats capitulate, and the Republicans sell us out to their corporate sponsors. This corruption is out in the open and now codified into election law. These politicians are owned. Watching them legislate is like watching dogs sit, roll over, and give you their paw. That this is our government is humiliating to all Americans.

Let’s look at what Congress’s sponsors got this year, and how much it cost them. The biggest prize goes to Wall Street. Tucked away in the 1,600-plus page federal budget is a provision that, the New York Times documents, was actually written by the corporate lawyers at banking giant Citigroup. That’s the same Citigroup that went belly up in 2008 after gambling recklessly with investors’ money, ultimately staying solvent only because of a $50-billion-plus taxpayer bailout. The rationale for the bailout was that, as one of the world’s largest banks, they held the global economy hostage. If we die, they claimed, you die. This year they held the federal budget hostage. Of course it didn’t hurt that the finance, insurance, and real estate (FIRE) sector gifted the incoming president’s campaign with $43,744,789.

As a condition of the bailout, the government told the bankers that they would no longer be allowed to take the public’s money to the roulette table. Technically, this was done through the Wall Street Reform and Consumer Protection Act of 2009, which is popularly known for the two legislators that authored it, Barney Frank in the House and Chris Dodd in the Senate. A major provision of Dodd-Frank prohibits banks from using money from federally insured deposits to invest in risky derivatives and commodities. But that’s also the kind of trading that makes bank executive uber-rich.

Imagine yourself having the same privilege. You go to the racetrack and place your bets. If you win, you keep the winnings. If you lose, the taxpayers refill your bank account. It’s a sweet deal. But it’s only available to mega-banks. Dodd-Frank makes that illegal. It’s not a major crime, like sharing your cigarettes on a Staten Island street, but it’s still illegal.

That little piece of plagiarized Citigroup prose inserted into the budget bill negates that part of Dodd-Frank, once again allowing financial titans to take our life savings to the casino.

This is blatant corruption in service to the mega-banks. Unlike politicians’ stands on issues like abortion, where voices in their heads command them, or unlike much of the Tea Party agenda, where they misunderstand what people in tri-cornered hats said or did a few centuries ago, none of the members of the House or Senate even attempted a lame or insane rationale for inserting this sweet deal into the budget and threatening to shut the government down if it didn’t pass. It just is what it is. There’s really no sense in trying to rationalize repealing a measure meant to prevent future bailouts of big banks. The bailouts, like the banks, were and are wildly unpopular. This is just business.

While Citigroup authored the wording for the repeal, it was Republican Congressman Kevin Yoder of Kansas who landed the dirty task of inserting it into the federal budget. For his troubles, the FIRE sector gifted his campaign with $510,200 this year. Yoder was following in the footsteps of Texas Republican Representative Jeb Hensarling, chair of the House Financial Services Committee, who shepherded a similar provision trough the Republican-controlled House last year, only to see it die in the Democrat-controlled Senate. For his troubles, FIRE corporations gave his campaign $2.3 million dollars this year.

Despite the fact that Republicans control the House with a comfortable margin, they couldn’t muster enough Republican votes to pass the budget, due to a Tea Party revolt within the party. One would think that the Tea Party folks, who were swept into office capitalizing on anti-Wall Street sentiment, just couldn’t go along with such a handout to the reviled banks. But in the end, that wasn’t their issue at all. For their tastes, the budget bill just wasn’t sufficiently cruel to immigrants. Of course this is just the budget bill, not an immigration bill, but congressional politics is so reliably dysfunctional that such antics are the new normal. If toenail fungus is your issue, and you’re a Republican, then just hold your breath, stomp your feet, and go for it. Crash the government. What the hell.

This Tea Party revolt, however, meant that getting the bill through Congress would be a fight. On the Republican side, Roll Call magazine reports that House Majority Whip Steve Scalia, Republican of Louisiana, and his deputy, Republican Patrick Henry, lobbied heavily for the bill. On the Democratic side of the isle, Minority Whip Steny Hoyer pushed members of his party to support the bill. This year the FIRE sector gave $555,000 to Scalise’s campaign, $767,000 to McHenry’s campaign, and $1.3 million to Hoyer’s campaign.

In all, 57 Democrats crossed the aisle to support the Republican leadership. This included Hoyer’s deputy, the number three ranking Democrat in the House, Jim Clyburn of South Carolina. The FIRE sector gave his campaign $605,200 this year. Most notable among the Democratic defections was Representative Jim Himes of Connecticut. He was an author of the Dodd-Frank provision that is being repealed. FIRE interests donated $1.3 million to his campaign this year.

The vast majority of Republicans who supported the bill don’t have to rationalize their vote. They were just following orders from their leader, John Boehner, who received $3.1 million this year from FIRE interests. And Republicans in the Senate were just following their leader, Mitch McConnell, who received just shy of $6 million this year from the FIRE sector. This minority of Democrats who crossed over to support Republican efforts to pass the bill, in pursuit of plausible deniability, denounced the bill they voted for, saying that Republicans blackmailed them by threatening to shut the government down before removing their corporate riders from the budget bill.

Their argument is supported not by the Democratic leader of the House, Nancy Pelosi, but by the president himself, Barack Obama. In true Democratic fashion, Obama slammed the Republicans for trying to gut Dodd-Frank, then capitulated to their political terrorism. Obama’s tempered resistance might have been influenced by the well over $20 million his campaign received from the FIRE sector in his last election. But there’s more to this than meets the eye; they gave his opponent, Mitt Romney, almost $59 million. This represented a turnaround from 2008, when they gave Obama almost $44 million, compared to the paltry $31 million they gave McCain. Apparently, Obama served them well, bailing out their industries while mostly allowing their executives to avoid prosecution and continue eating with both hands. But they seem to have little use for him now and would rather invest in assets with better corporate pedigrees and less populist rhetoric.

The take-the-banks-to-the-casino provision isn’t the only rider that Republicans snuck into the budget bill and are threatening to shut the government down to protect. Another important provision guts one of the last campaign contribution limits still in place after the 2011 Citizens United Supreme Court ruling. It raises the current limit that an individual can donate to a political party (political action committee donations are already unlimited) from the current $97,200 to over $750,000 per year. Couples can buy a seat at the table by giving a party up to $3.1 million per year.

There’s something for everyone in this budget bill. The coal industry will be allowed to dump toxic waste into Appalachian streams. The oil and gas sector paid their members of Congress for a rider that will allow them access to federal lands that would have otherwise been protected.

Some of the goodies are actually budget-related, though corporate handouts nonetheless. For instance, tax cheats will be happy to learn of a $345 million cut to the IRS operating budget, impairing tax code enforcement and auditing, which will in turn cost the government billions, while protecting the sort of criminals Republicans traditionally like to protect. In a major concession to corporate eco-criminals, the Environmental Protection Agency, which has seen its enforcement abilities weakened by five straight years of budget cuts, will now suffer another $60 million cut. If you’re a CEO with a few bricks of spent uranium in the boardroom closet, now would be a good time to toss them in the wastebasket.

And just to keep up appearances with the red meat crowd, here’s a Republican budget line that actually is not directly in service to any particular corporate lobby—a $93 million cut to the Women, Infants and Children Nutrition Program (WIC). Compared to what we’re giving away to corporate interests, this doesn’t even amount to pocket change. It’s just mean.

Michael I. Niman is a professor of journalism and critical media studies at SUNY Buffalo State. His columns are available globally through syndication and are archived at mediastudy.com. The campaign donor numbers presented here come from the Center for Responsive Politics, a not-for-profit independent research organization dedicated to government transparency.