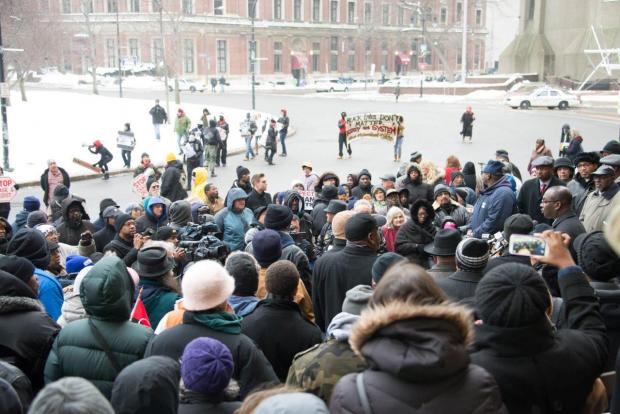 White animal rights activists chanting “All lives matter” and “Dogs lives matter” disrupted a rally led by black clergy and community leaders in Buffalo’s Niagara Square on Saturday. They heckled people whose communities have been terrorized by police violence as long as I’ve been alive, condemning them for not focusing on dogs killed by the police, along with black victims like Eric Garner.

The crowd of black protesters on the steps of City Hall included parents of black kids and the families of black adults regularly targeted by police. They watched this ridiculous theater of privilege: white kids taunting cops in front of them, chanting “Fuck the police” at police officers with impunity.

Certainly, it sucks that cops kill dogs, and the numbers and impunity with which police gun down pets are both horrific. But the timing, location, and animosity against people with whom the demonstrators should be expressing solidarity showed, at best, a pathetic and callous insensitivity. Call me a humanist, but I’m more upset that cops get away with wanton killings of innocent black people. Other people suffer police violence as well, but the focus at this rally was black people, because police specifically target black people, and black people are much more likely to fall victim to police violence, making police violence a public health crisis in black communities.

The national day of action and the rally on the steps of City Hall in Buffalo on Saturday was not about dogs. And it wasn’t about white folks flaunting their privilege by screaming “Fuck the police” with impunity. To those folks: It’s not about you. This is about black Lives. Don’t try to hijack the moment.

In a marriage of ignorance and intellectualism, white blogospherians are “debating the tactic.”