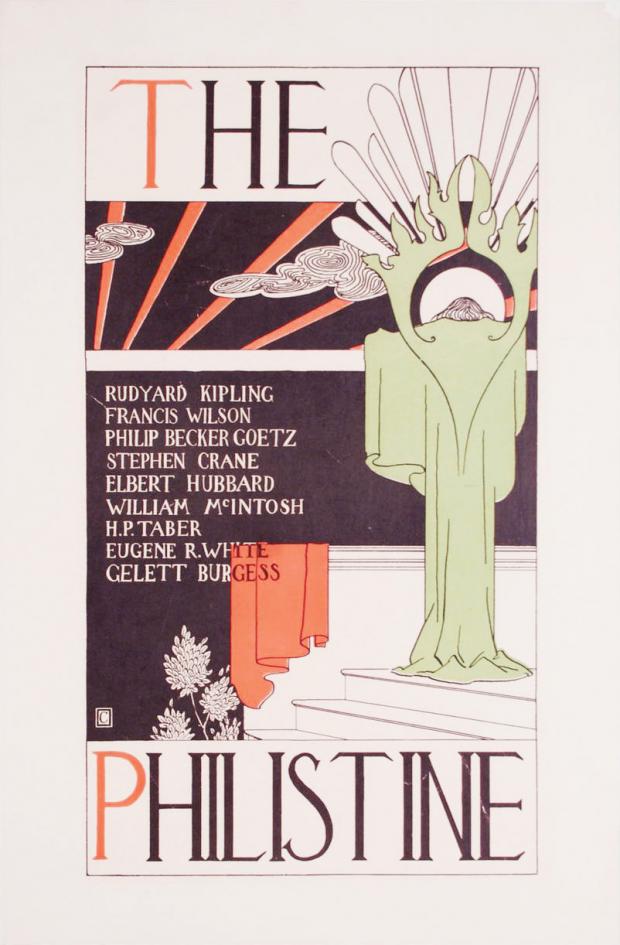 I read about psychic phenomena—“spooky stuff.” I write about it. I listen to people who think they’ve seen it. I talk to people about it based on the picture presented by research, as well as the folklore. It’s extremely rare, I think, for any of us to experience psychic phenomena. See what you make of this third of our series of Christmas-season ghost stories at East Aurora’s Roycroft Campus—a potentially psychic Christmas Eve event into whose aftertones I stepped.

East Aurora’s Roycroft Campus is a lovely place at any time of year. Around the holiday season, it may also be mysterious.

Just across South Grove Street from the Roycroft Inn is the Copper Shop, a 1902 building fashioned of such solid stone that it’s probably earthquake-proof. It’s here that in its heyday the Arts & Crafts movement community Roycroft did most of its metalwork. It’s been a gift shop since the 1960s, and on the grey twilight of a Christmas Eve in the late 1980s I walked up the short east-west “Appian Way” named after Rome’s great road and approached it, thinking to come up with one more out-of-the-way present for somebody. I entered to find two wide-eyed clerks—a longhaired male artist and a young female student—a few feet behind the door, holding up a framed poster I couldn’t see and peering into it.

“You had to have seen her,” said the other. Then they told their tale.

An old woman had come in minutes before, dressed “like a Gypsy.” They thought she was crazy. For a quarter of an hour she had stalked the place, muttering to herself indignantly. She had a foreign accent. She stared at what was on the walls, peeped into the corners as if to interrogate them, and looked under tables and inspected closets as if playing hide-and-seek with an elf. Then she marched to the counter. “All right, where is he?” she demanded.

“You know who,” the old gal said. “The man who put all this here.” She swirled a hand above them.

“Elbert Hubbard?” said one of them incredulously.

Her manner presumed that Roycroft’s founder Elbert Hubbard (1856-1915) was in hiding somewhere about the Campus, not seventy years into the Irish Sea with the Lusitania. It was as if she suspected that the old rascal still orchestrated every aspect of the place, that he could be summoned like a genie, that he was afraid to come out and settle scores with her, and that everybody at Roycroft was in on the plot to keep her from getting at him.

The old woman turned to go, stepping out of sight from the counter. At about the point that she would have exited, in place of the ring of the door’s merry bell came a ponderous sound that shook the building, followed by a sharp, light clack. The clerks’ first thought was that the woman had slammed the door with a superhuman force that, if it could rattle that structure, would have left every bit of glass in shards on the floor. They rushed in and were shocked to find nothing out of order but a framed poster that had flown from its mount on the heavy wall opposite the door twenty feet away and landed face down on the floor. This explained the lesser noise, and this they were examining as I’d entered, staring from it to the door and back again. This should not have been a natural event. It had obviously impressed the two clerks.

The pair questioned me pretty closely. I couldn’t have missed the old dame if she had come out at the time they said she had, just seconds before my own appearance. Where could she have gone, anyway? There are no hiding-spots within fifty feet of that storefront. The clerks presumed that she vanished. That sounds like a ghost, but an exceptionally solid one. She had spoken to the clerks and may have handled objects during her sojourn in their shop. She must have opened the door for herself twice.

What do I make of this in reality? Nothing but the fact that I was told yet another Christmas-season story at Roycroft. What do I make of it against the backdrop of the local mythology about founder Hubbard? There are fanciful connections.

Roycroft Founder Elbert Green Hubbard (1856-1915) was a Yankee original, a self-made man of many talents and wide interests. Like many artsy ladies and gents at the turn of the 20th century, he was interested in many of the day’s -isms, including Rosicrucianism, Spiritualism, Theosophy, Freemasonry, and Christian Science (which is far more mystical than the stereotypes of either of its names). The Arts & Crafts Movement that inspired Roycroft derived much of its own inspiration from the Middle Ages, the age of Alchemy, which is sort of a mix of chemistry and magic. If you know one and scan the other, you find haunting similarities between the imagery of Roycroft and that of Alchemy.

In the most developed mythologies, the adepts of both Rosicrucianism and Alchemy were virtual wizards. While magic wands and Harry-Potter-style spells should be out of the question, the idea that Hubbard might return now and then to Roycroft as a deliberate ghost and fatherly confessor was part of the conjecture about him among a cult of aficionados whom I interviewed while writing a chapter on Roycroft for my first book Shadows of the Western Door (1997). As radical as it looks to the non-specialist, rumors like this are out there. Look at the legends about the Christian saints. Look at what they’re saying now about Sai Baba.

As for the presence of the strange old lady… If I were looking at this like a parable to be analyzed, the figure of the crone is one of the prime incarnations of the archetypal Goddess. Hubbard would have known about that. There is Goddess-symbolism at Roycroft. Hubbard was an early Feminist, one of the first men of his day to try to bring talented women of the past and present into the light of just acclaim. He published the literature of women writers and profiled famous women in his own short biographies, the Little Journeys series. Hubbard’s friendly acquaintances included occultists like “New Thought” poet Ella Wheeler Wilcox, Theosophist architect Theodate Pope, Christian Science founder Mary Baker Eddy, H. P. Blavatsky’s “Order of the Golden Dawn” successor Annie Besant, and astrologer/artist Katherine Emma Maltwood.

Maltwood (1878-1961)—discoverer of the landscape formation called “the Glastonbury Zodiac” and a devotee of tarot and Goddess-spirituality—was even commissioned to design a sculpture that once graced the Roycroft Campus, called nothing other than Magna Mater, “Great Mother.” If an avatar of the Goddess were to come to town and call for an accounting out of Hubbard, Christmas/Midwinter Eve—the figurative rebirth of the light of the year—would be a likely night.

If you’re curious about the poster that flew off the Copper Shop wall in the earlier anecdote, no more suggestive object could have been found in the whole building. It was a reproduction of the 1895 painting made to commemorate the first Philistine magazine, the little legend that launched Hubbard and Roycroft onto the world stage. Its striking imagery includes the green robed (spirituality), angel-winged form of, evidently, Hubbard, leaving behind the red robe (materialism) and facing a shiny orb that would have “illuminated” his forehead. All this has connections to several western occult philosophies. The red-green colors often used with Roycroft and Christmas have marked Rosicrucian associations, just mentioned. The angel-wings around the orb make the Egyptianate winged-disc motif, another widely-used symbol. I discussed all this at more length and better precision in Shadows of the Western Door. The poster is here. See what you make of it.