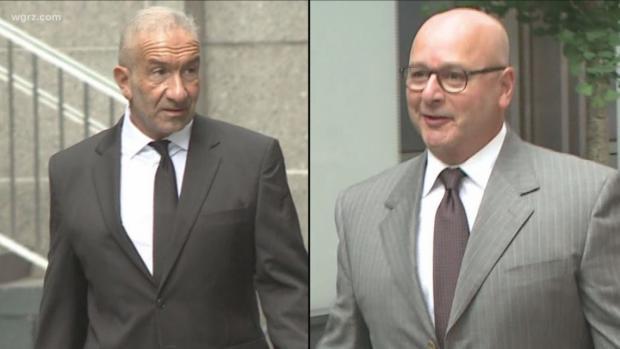 Hold up a gas station and you’re looking at a minimum of five years in prison.

Get napped with an ounce of crack and the mandatory minimum is five to ten years.

Engage in bid-rigging, and in the process violate the public’s trust and cost taxpayers potentially million of dollars?

If you’re Louis Ciminelli, the sentence is two years and four months. For Alain Kaloyeros, three and a half years. Minus time off for good behavior, of course.

And don’t worry about starting your sentence anytime soon. You’re a free man until you and your high-priced lawyers have exhausted the appeals process.

The sentences also carried fines, in totals that amount to a fraction of their net worth. I mean, Kaloyeros had been making around $1 million a year as a SUNY employee. His $100,000 fine is almost chump change. He owns cars worth more than that.

“This sentence serves as a warning to others in public life,” said U.S. District Court Judge Valerie E. Caproni, who sentenced both Kaloyeros and Ciminelli. “If you engage in public corruption, you will be shown no mercy, and you will go to jail.”

The message the judge sent is that if you’re rich enough, wired enough, you can get off with a slap on the wrist, even if you’re involved in one of the state’s biggest corruption scandals in decades. You’ll serve less time than someone who robs a gas station of $100 or gets caught with a quantity of crack small enough to fit in the corner of a baggie.

Kaloyeros’s sentencing all but wraps up corruption cases that engulfed state funded economic development projects in Buffalo and Syracuse.  The judge’s weak-kneed sentences are one of only three ways the political class has failed us.

The US Attorney’s office in Manhattan that handled the corruption cases did not carry its prosecution to its logical conclusion. I mean, does anyone really think Governor Andrew Cuomo—a certifiable control freak—didn’t know what was going on within his own administration? Prosecutors had Cuomo fixer Todd Howe under their thumb. Why didn’t the feds get him to sing?

Then there’s our state Senate and Assembly, which are in the process of finangling itself a giant pay raise, but can’t bring itself to pass legislation aimed at thwarting funny business in the awarding of state contracts.

The judge, the prosecutors and lawmakers have all let the public down, and in the process enabled future corruption. And that, folks, is a real crime.

Jim Heaney is editor and founder of Investigative Post, a nonprofit investigative journalism center focused on issues of importance to Western New York.