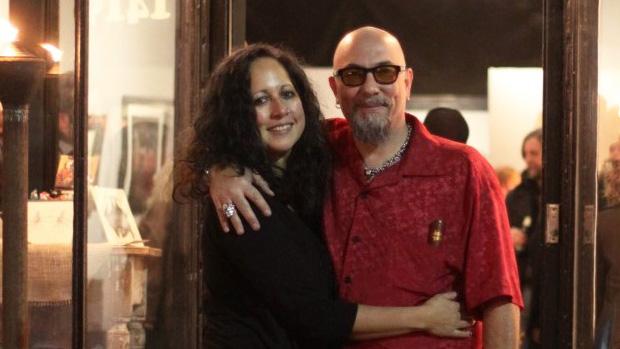 Artist Craig LaRotonda emerges from the back room of his new art gallery, Revolution Gallery, located at 1419 Hertel Avenue, to give me the grand tour. His hands are covered in black paint from a project he had been working on a moment earlier.

The gallery we’re standing in was formerly a bookstore, and if you’d ever visited the store that was once here, you’d have noted that you would not have been able to see from one end of the room to the other due to the immense number of books stacked on shelves. That’s not the case, now. The room has been transformed into a minimal art gallery—two leather ottomans sit in the center of hardwood floor facing the gray-blue walls on which the gallery’s first exhibit hangs. The exhibit, titled Inception, features artists from Buffalo, Rochester, and beyond, including LaRotonda and his wife Maria Pabico LaRotonda. Both create dark, surreal art. Craig categorizes the gallery as “pop surrealism,” which is really a bunch of genres—usually darker, obviously surrealistic—combined.

Their art meshes well with the work of the other artists, one of whom paints in human blood, and another who was once on death row.

The artist who once resided on death row is the infamous Damien Echols.

As many people know, Echols was sentenced to death in 1994 for the murder of three young boys in West Memphis, Arkansas. The HBO-produced documentary film Paradise Lost shed some doubt on the evidence used to convict Echols and two other teenagers and made many celebrities aware of the case. In 2011, Echols and his alleged accomplices were released from prison after entering an Alford plea (essentially a guilty plea by which the defendant does not admit guilt, but admits that the courts have enough evidence to persuade a jury).

After 18 years in prison, Echols was released and has since gone on to have a successful career in the art world, renowned for his collaborations with celebrity musicians and artists such as Michale Graves of the Misfits, Eddie Vedder of Pearl Jam, and actor Johnny Depp. That list now includes LaRotonda, who collaborated on two visual art pieces with Echols as part of the Damien Echols Collaborations Exhibit, which is currently showing at the Copro Gallery in Santa Monica, California. The two connected when Echols attended a solo exhibit of LaRotonda’s in New York City and quickly struck up a friendship and working relationship. In LaRotonda’s own gallery hang two fully original Echols paintings. The paintings are small and feature an invented symbolic language.

LaRotonda clasps his black-paint-covered hands and tells me more about the art.

“[Echols] is a great guy and he’s been creating works that have been very popular. This is his own language. They’re symbols or invocations that are mantras that helped in his long stay in prison in solitary,” he says. “I’m absolutely fascinated by [Echols’s] story. I feel very empathetic toward him. I think he really didn’t commit a murder that he was accused for. I can imagine how horrible it would be to live that. I love seeing him thrive, so I was interested to help him out.”

On the other side of the gallery is a piece by Maria Pabico LaRotonda.

The piece is a digital collage made by combining photos and digital painting. Maria LaRotonda’s dreamlike style is as unique as Craig’s. It’s hard to mistake their artwork with anyone else’s in the gallery. There’s a sense of reality in the photos that’s counterbalanced by surrealness of environments to create what Maria describes as a state between waking life and dreaming. It’s not explicitly dark in nature, but rather uncanny.

Craig’s art, too is not necessarily dark, per se, though that’s the first impression many people might glean from it. He works in many media but the work displayed here are paintings, which share themes like the transcendence of consciousness and are often iconographic. His subjects often wear crowns or halos and appear to be saints or monks. Texture is also an inspiration for Craig. He shows me a piece made on a found scrap of paper which had burn marks. A larger piece was painted atop blueprints. In areas on the painting, the blueprints show through. Texture comes first, as it does too for Maria. Maria, who designs websites as well, describes taking large chunks of html code, flipping them and reversing them, blowing them up, and using it as background texture for some of her pieces.

But there is an aspect to the “foundness” of an object that appeals to Craig too.

“There’s something comforting about it. Maybe this paper was discarded paper from a writer who was writing a story. It could have been about anything, a devilish creature. Just thinking about the syncornicities that are possible.”

It might be that sense of foundness or discovery is what inspired the couple to open the gallery. They’d been toying with the idea for about a year, even thinking they might move to New York City to do it, but when the space on Hertel opened up they got serious and sprung into action.

“We wanted to do this but it would have taken the right space. And I couldn’t have asked for a more perfect space,” says Maria.

“A great confluence of wonderful things have happened for this to become a reality in this space,” says Craig.

The space is “identical” to the vision Maria and Craig had for a gallery.

The couple has a distinct vision for the future of the gallery, which include film screenings, opening receptions, and even dinner parties.

“We’re going to definitely bring some more shows to Buffalo that have the national artist vibe to it,” says Maria LaRotonda.