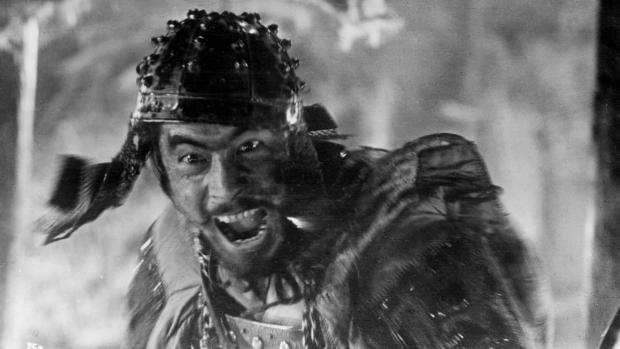 There aren’t many movie stars more iconic than Toshirô Mifune, who for most Americans is Japanese cinema. That his closest competitor in this regard is a fictional character—Godzilla—is a point humorously made in Mifune: The Last Samurai, a new documentary by Steven Okazaki, Oscar winner for his 1991 short “Days of Waiting.”

Mifune is of course best known for his collaboration with director Akira Kurosawa. There are any number of famous director-actor duos—Martin Scorsese and Robert De Niro, John Ford and John Wayne, Frank Capra and James Stewart. But few had this kind of connection. Between Drunken Angel (1948) and Red Beard (1965), Mifune was in every one of the 16 films directed by Kurosawa. They became international stars together in 1950 with Rashomon, which told the story of a rape and murder from four different, conflicting points of view. While most all of their films were seen around the world, the best known were Throne of Blood (1957, based on MacBeth), The Seven Samurai (1954), The Hidden Fortress (1958), and Yojimbo (1961, adapted a few years later by Sergio Leone as A Fistful of Dollars). All featured Mifune as samurai characters who combined a leonine ferocity with a depth of character unusual for the genre.

To the extent that The Last Samurai lets you watch clips from these and other Mifune films, it’s as good a time as you could want to have in a movie theater. Cinema historians will also relish rare, restored clips from Japanese chanbara (sword-fighting) movies made in the 1920s, most of which are lost.

But while Okazaki, who has made a career out of documenting the country his grandparents left for the United States, does a good job of describing the Japanese militarism of the 1930s and 1940s that shaped Mifune personally, he’s at a loss to bring his subject fully to life. He lays out his career, from accidental entry into the profession of acting (Mifune’s goal was to be an assistant cameraman) to an ill-advised late life entry into production. But he has no off-screen footage of the actor, who died in 1997, and the interviewees who remember him firsthand don’t provide much depth. There are a few amusing anecdotes from Martin Scorsese and Steven Spielberg (who worked with Mifune on his epic comedy 1941 and recalls that he got along very well with co-star Christopher Lee—if only there were outtakes of that pair). And the revelation that he was offered the role of Obi-Wan Kenobi in Star Wars (which was based on The Hidden Fortress) ranks high in the what-if file of missed castining coups. The Last Samurai is a passable introduction to Mifune’s work to those who don’t know it and an enjoyable refresher for those who do; think of it as an extended trailer for Yojimbo, probably his most enjoyable performance, which the North Park is also running this week.