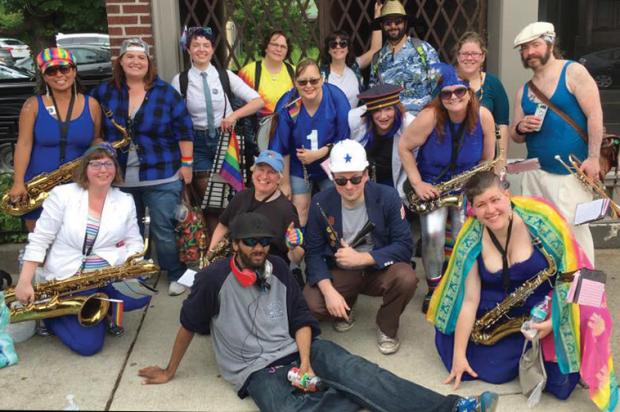 The self proclaimed “party band with a marching problem,” Brass Pro and the Waterfront Revivalists, depending on the day, are a 10 to 15 member pep band hailing from Buffalo, New York. Led by baritone saxophone player Kim Saben, the Buffalo pep band collective are slated to play the annual Mohawk Play Xmas Party this week (if they can all fit on stage at once) along with a huge line up that includes Buffalo rock music veterans the Irving Klaws as well as Baci e Ceci, BoBo, Bank Noise and more. This week we talked to Brass Pro’s Kim Saben about how she manages to get 15 musicians to the same place at the same time, the origin of the band, and the worst Christmas song of all time.

Tell me a little bit about the origin of the band.
​The band was formed by Aimee Buyea who was one of the founders of Sugar City. She had been to some festivals and had seen some other party marching bands out there—there are actually quite a few bands across the United States that do like a guerrilla style performance where they’ll just show up at a location, and that was the original idea behind the band. It didn’t actually end up being that way. There are a lot of groups that are full of activists and they’ll play protests and stuff like that, and there’s bands like that all over the country. There’s a music festival that showcases these bands called Honk. She had been to one of these festivals and wanted to start a band like that, and she wanted to start it along with the reopening of Sugar City when it went to the Niagara Street location. She approached me—she was a student of mine when I was student teaching and later on we became friends—and I had just started playing the bari sax. I loved the idea, so I said “this sounds great.” Our first gig we had six people in the band.

Is it hard to get 15 musicians all into the same room at the same time?
It is. We try to have a regular rehearsal schedule, every other Sunday, but sometimes we throw some extra rehearsals in when we have something big coming up. It’s kind of like “this is our schedule, so if you can join the group then you can do that schedule.” We usually have at least 10 people when we play live.

Where does your music come from?
A lot of our music comes from the simple marching band or pep band arrangements that are arranged for high school pep bands. I do some of the arranging myself for some of the songs too. If we want to play a song or if somebody requests a song for a gig that we have and it’s not available for purchase or someone hasn’t already done it for marching band—some of these songs are not really traditional—I’ll arrange them myself.

Like for instance, a pop song or Christmas songs.
Yeah, for example we’re doing “Christmas Baby Please Come Home” for our Mohawk Christmas show and I did the arrangement for that.

What goes into that? How do you even begin to arrange that for 10 to 15 musicians?
I went to school for Music Education so I have a familiarity of small ensembles. Our group, even though there’s 15 people, we cover pretty much the instrumentation of a small concert band or pep band, even though we only have one person on each instrument as opposed to a high school that would have multiple kids on one instrument. I’m familiar with the range of the instruments, so I usually take a piece of music that we want to play and go off of the sheet music for that piece of music and try go give all the instruments parts that fit in their range. I have to keep our instrumentation in mind and our strengths and weaknesses. Anyone who wants to join the group is welcome, so some people haven’t played their instruments in years and they’re just getting back into it and some people are maybe just learning their instruments, so I have to cater to the strengths of the band. It can be a long process to arrange a song, but it usually comes out pretty well and we like to pick tunes that a marching band wouldn’t traditionally play.

Where did the rest of the members come from?
We’ve had a few recruitment events to get more people into the group. Pam Swarts was one of the earlier members, but I’m actually the only original member left. But [Swarts] is very connected in the music community and she brought a lot of people into the band. Usually once a year we’ll hold a recruitment event to get people to join up with us and sometimes they’re successful—we usually get one or two people to sign up with us.

Tell me about the Mohawk Place Xmas show. How far in advance did you have to start thinking about arrangements for Christmas songs?
[She laughs] Well I started working on arrangements during the summer but I never start early enough. I was finishing Christmas Baby yesterday up until about an hour before practice. Because of that I haven’t even decorated my house yet for Christmas which is really stressing me out.

I think that’s universally accepted as the worst Christmas song.
It’s just not realistic. That wouldn’t really happen. Some kid is not going to be wandering the streets for his mom to have shoes for Christmas before she dies. It’s just not a thing that would happen. I don’t like it.