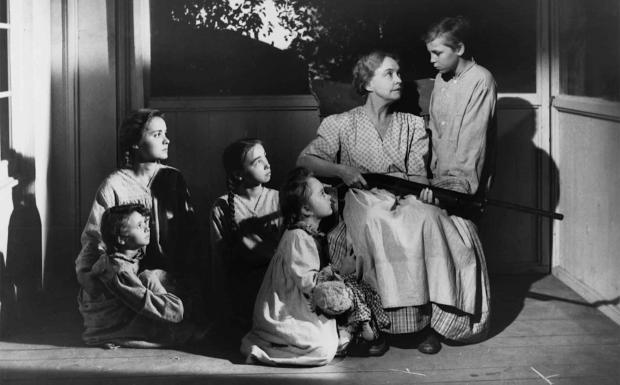 The Night of the Hunter (1955), the final selection in Alex Weinstein’s five-film noir series at the Dipson Eastern Hills Cinema, isn’t only a celebrated classic; it’s an example of a film that was too good. Directed and co-written (with James Agee) by the distinguished actor Charles Laughton, it was met with high praise by luminaries like Francois Truffaut, who feared it was too accomplished and unusual.  “It will probably be Laughton’s single experience as a director,” he wrote. As it was.  It took decades for it to be appreciated.

Adapted from David Grubb’s popular novel, it can be argued it isn’t really a noir film, but it is hard to classify. Weinstein calls it “singular,” and that’s surely appropriate given its amalgam of suspense, lyricism and striking visual style.

In the Depression-era Midwest an unforgettable Robert Mitchum is a homicidal, bogus backwoods preacher (with “love” and “hate”) tattooed on his knuckles) seeking a stolen money stash and menacing the robber’s widow (Shelley Winters) and two small children (Billy Chapin and Sally Ann Bruce). The film reaches an unsettling poetic intensity in sections, particularly in the famous sequence where the children float downstream in a boat as the preacher pursues them on horseback. The remarkable dreamlike imagery suggests the young refugees’ immature impressions, even as we understand their peril. Counterposed to Mitchum’s sinuous evil in the film’s humane Christian subtext is Lillian Gish’s heroically practical spinster, a sort of fairy godmother, and a standout in her seventy-year-long career.

The Night of the Hunter is a film that haunts memories.