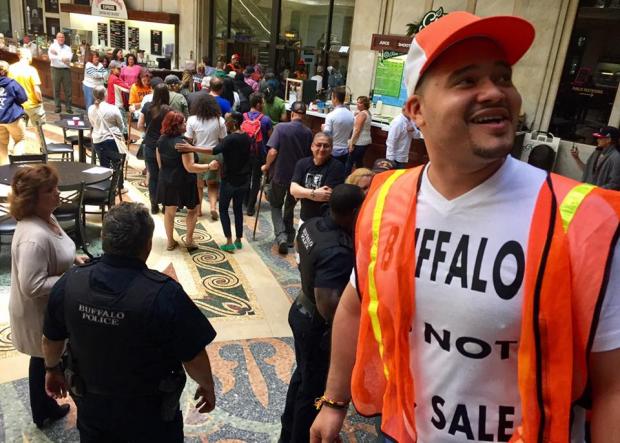 PUSH Buffalo’s Christian Parra during an anti-gentrification protest this past June at the Ellicott Square Building to bring attention to developer Carl Paladino and Ellicott Development’s role in displacing low-income residents and communities of color. Photo by Harper Bishop.
by
Justin Sondel
/ Dec. 12, 2017 5pm EST

As Mayor Byron Brown’s administration prepares to take final steps in developing a strategy to deal with the city’s affordable housing crisis, advocates are voicing growing concerns that they will be shut out of the process.

During a Common Council meeting last Tuesday advocates showed up to voice their support for a variety of progressive strategies, including a program that would see 30 percent of units in new housing developments reserved as affordable housing, and were met with mixed responses from council members.

Now, some advocates say, there is a fear that they will be excluded from the conversation as the details of Brown’s housing strategy are finalized.

“There’s a feeling that we will be shut out and decisions will be made behind closed doors,” Harper Bishop, an economic and climate justice coordinator at Open Buffalo, said. “That we won’t have a say in, ultimately, what happens.”

The debate over how to best address the city’s housing issues has intensified since the Brown administration released a long-awaited housing study, prepared by the Washington, DC area consulting firm czb LLC, that examined the city’s housing market in a highly granular look at neighborhood trends. The study found, as many observers expected, that swaths of the city have seen significant spikes in real estate values and rents while other neighborhoods have remained stagnant. The growth in neighborhoods like the West Side, the Fruit Belt and parts of South Buffalo has caused issues for long time residents—the study notes the many issues caused by the city’s high poverty rate, economic segregation and racial segregation—who are being pushed out as new, more affluent residents move in.

The white paper also set forth a list of recommendations that have been met with mixed reviews, with the suggestions surrounding inclusionary zoning—the practice of requiring or incentivizing the inclusion affordable housing units in market-rate projects—causing the most concern among housing advocates.

The study, which cost the city $90,000 and took just under a year to complete, suggests that inclusionary zoning could be an effective tool in the city’s most desirable neighborhoods, but only if it is voluntary and offset with additional incentives for developers.

Developers have complained that mandatory inclusionary zoning requirements would stifle development and cause more builders to look at projects outside the city.

Asim Johnson, the lead organizer at the Coalition for Economic Justice, said the city needs a policy that will benefit those affected by the hikes in rents due to the recent housing demand and influx of new residents coming into neighborhoods.

“The concern for incentives to benefit developers that use public dollars for their own gain is absurd,” he said.

Advocates have said they are glad that inclusionary zoning was included as a recommendation in some form, but the idea that it be tied to additional incentives when most—if not all—development projects already receive lucrative tax breaks or funding from the state, city or Erie County Industrial Development Agency, is not acceptable.

A report commissioned by Open Buffalo and prepared by the Partnership for the Public Good calls for mandatory inclusionary zoning on projects with more than 10 residential units, with 30 percent of the building reserved for affordable housing units.

Bishop said that years of incentivizing development in Buffalo has done little to help the people most in need.

“Low wages are clearly an issue here, but the current economic development model our city is practicing has not brought the jobs that it has promised,” he said. “It has given away enormous amounts of public tax dollars for the development of unaffordable luxury housing, while creating temporary construction jobs. This band-aid, trickle-down framework for change needs to be addressed and it needs to be addressed now.”

Meanwhile developers and the Buffalo Niagara Partnership, the region’s largest business advocacy group, support the idea of voluntary inclusionary zoning with greater incentives granted to builders who choose to participate.

Brown has long enjoyed the support of the powerful business group and the developers it represents, taking in tens of thousands of dollars in donations from the developer class over the course of his political career.

Mike DeGeorge, Brown’s spokesman, said that the mayor’s team was busy working on the affordable housing strategy—it is expected to be released later this month—but had no final answer on how inclusionary zoning would play a role in the plan. He said he would try to get back to The Public with more information, but did not call back by press time.

“It’s possible that before we say anything he would release his strategies first,” DeGeorge said.

Still, the mayor signaled last week that he is unlikely to embrace mandatory inclusionary zoning in his forthcoming affordable housing strategy.

“It’s a complex market and there are not enough resources—there never are—to do all the things that need to be done,” Brown told the Buffalo News. “We have to make very hard decisions, with surgical precision, so that when we spend money it’s having the greatest impact on the greatest number of people possible.”

Buffalo has for years suffered from disinvestment in its poorest neighborhoods, with a crumbling housing stock left to rot as people and capital left the city during deindustrialization. The Brown administration has made demolitions a priority, taking down more than 6,400 houses since taking over in 2006. But, little has been done to preserve abandoned houses and only recently has there been moderate progress in managing the city’s massive holdings in abandoned houses and lots, largely through the Buffalo Erie Niagara Land Improvement Corporation.

And while certain neighborhoods have piqued the interest of socially mobile groups, entrenched poverty has persisted. From 2015 to 2016 the number of homeless peoplein the city increased by about 10 percent. At least 4,000 families seeking safe and affordable housing remained on a city waiting list when it was shut down several years ago, according to the advocacy group study.

India Walton, a Fruit Belt resident and organizer with the justice and opportunity coalition at Open Buffalo, questioned why developers and business groups were the experts the Brown administration trusts to help solve a social problem like the intense need for expanded affordable housing options in Buffalo.

“At what point will we stop coveting money and begin to value human life?” Walton said. “Not only are we seeing families houseless, but the lack of affordable options place the unneeded burden of insecurity on those of us who are spending upwards of 40 percent of our incomes on rent. I’d be tempted to say it isn’t fair, but life isn’t fair. It’s just not right.”