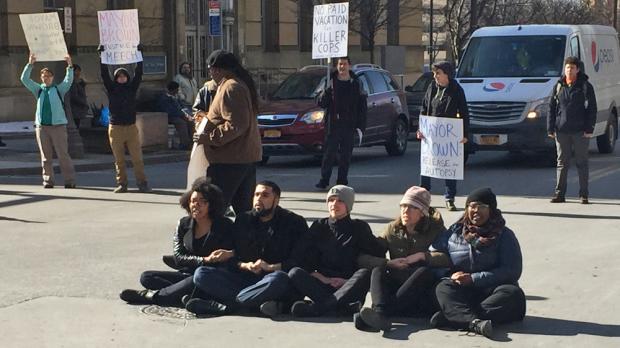 Last week the office of the New York State Attorney General served the Buffalo Police Department with a letter seeking information on police checkpoints going back to January 2015, as well as information related to the policing of the Buffalo Municipal Housing Authority properties. More importantly, however, the letter confirmed that the AG had commenced an investigation based on a complaint filed with the AG in August, the result of a two-year study undertaken by the SUNY at Buffalo and Cornell University Law Schools.

At the heart of the complaint is the allegation that the BPD policies and practices are not only unconstitutional but racially prejudiced. The complaint was signed off by a local chapter of Black Lives Matter. The following is a series of statements prepared by the lawyers and activists involved in the action to bring the BPD’s longstanding practice of checkpoint implementation to light.

The connection between deadly policing and checkpoints and stop and frisk in Buffalo is police culture. That culture is racist. It is built on an unchecked and illegal presumption of guilt suspicion and dangerousness, unfoundedly assigned to people of color. Not necessarily every police officer is bigoted, but there is a deep culture in the BPD of bias against people of color and poor folks.

The BPD has been violating the constitutional rights of an entire community. These violations of constitutional rights have included unlawful arrests, unlawful searches and seizures, and resulted in the loss of property, freedom, job and income, hefty tickets, fines, and fees all on the taxpayers’ dime. These checkpoints are unconstitutional based upon the fact that the BPD has yet not been forthright with documentation that is required to kept by law.

Checkpoints are constitutional if strict guidelines are followed. If these guidelines were followed then all of the data from the last five years would have been readily available and already presented. The fact that this hasn’t taken place indicates that the BPD have something to hide.

Most importantly people have lost faith in the system and hopefully this investigation will restore it.

If the police cannot be trusted to be just then no one is safe.

The BPD’s racist culture and policing practices that systematically disregard black lives have lead in the deaths of two young, unarmed men of color, Wardel Davis and Jose Hernandez-Rossy, in Buffalo in police encounters that never should have happened in the first place. The Buffalo Police Department is infected with dehumanizing and dangerous racism. Instead of keeping us safe, the Buffalo Police do not protect and serve our communities—they target us without any legal reason, erode our trust and put us at risk by treating all of us as suspects. We hope the AG’s investigation and process brings an end to the criminalization, incarceration, and killing of our people. Officers Parisi, Tedesco, Acquino, and McAllister must be prosecuted to the fullest extent of the law.

We support this investigation because it is long past time that the Buffalo Police put an end to the war against black and brown people and be held accountable for their lawless actions. We have been stopped for no reason and treated without justice and dignity for too long.  The City of Buffalo has criminalized our communities and put too many of our children and adults into the criminal justice system, cutting short their opportunities.

We demand the AG also provide justice for our friends Wardel Davis and Jose-Hernandez Rossy, the two young men of color ruthlessly killed at the hands of the BPD this year. We demand prosecution of the officers to the fullest extent of the law.

The Buffalo Police Department needs to be held to an equal, if not a greater standard than the people are. They are here to protect us. Right now, the Buffalo police acts as if they can violate the rights of the people whenever, wherever, and how ever they want. This year this culture, sanctioned from the top, led to two unarmed men of color dying, and too many people of color indignified on the streets, assaulted and swept into the criminal justice system for no reason at all. This has to stop.

We hope the AG will use his full power to stop the Buffalo Police Department discriminatory policing for gentrification and instead of protecting and serving the people. The AG’s initiation of an investigation is a good sign, but their request of checkpoint data going only as far back as 2015 is deeply concerning when we know they have been using these checkpoints since 2013 in ways violate the equal protection of our city’s East Side residents. The people of the City of Buffalo have had their rights systematically violated for generations, recently two had their lives taken, and we need the Attorney General to do everything in his power to hold the perpetrators of their deaths accountable and end the oppression that continues to terrorizing our people.

While we welcome the Attorney General’s investigation, we hope the AG’s investigation signals, and will lead to justice for Wardel Davis and Jose Hernandez-Rossy. At the heart of it, the AG is investigating the same widespread suspicionless, discriminatory broken windows Buffalo policing strategy that led to the death of Wardel Davis—a 20-year-old, unarmed African American man—last February for simply walking home from a friend’s house when Buffalo police officers began pursuing him when he allegedly fled—only for him to die after they tackled him.

It is the Buffalo Police Department’s unconstitutional policing strategy that led Buffalo Police officers to stop Jose Hernandez-Rossy, a 26-year-old unarmed father of three, who was pulled over for allegedly “smoking a marijuana cigarette,” leading to a struggle that ended with a BPD officer getting down on one knee and shooting Mr. Hernandez-Rossy in the back-from half a block away.

Lastly, it is the callous blindness and top-down culture of impunity, which operates in the absence of sufficient accountability systems, that have allowed the city to callously promote the false narrative that Mr. Hernandez-Rossy had a gun and shot a BPD officer—a charade that BPD continued for three days after the BPD officer underwent surgery.

Until justice is provided to the families of Wardel Davis and Jose Hernandez-Rossy, and until the City of Buffalo creates a police accountability mechanism free from mayoral influence and elected by her residents, we must not rest.

We support this investigation because the BPD illegal police checkpoint program in residential neighborhoods has not just failed to achieve the city’s stated purpose of crime control, but undermined community safety and trust in the police. Instead, the BPD through this program has diverted resources from legitimate public safety needs, reinforced racial stereotyping, and exacerbated racial and ethnic disparities in the City of Buffalo.

According to the report, BPD’s checkpoint program disproportionately targeted in neighborhoods of color resulting in a significant increase in the number of minorities in criminal justice system and unnecessary-and undignifying-police encounters. This program has been used as a revenue generator by the city through fees and fines. A cost that is borne mainly by people of color and especially by African American communities, exacerbating pre-existing disparities.

Anjana Malhotra, co-counsel and co-author of report and complaint

The AG’s intervention is necessary because the policies and practices we documented were directed by the highest officials from the City, BMHA and BPD have been harmful for all Buffalo residents. Buffalo residents, particularly people of color, feel as if they are under occupation by an armed force that is at war with them, rather there to protect them and that their prioritizes are meeting revenue quotas rather than public security. This has corroded all trust in law enforcement, and is the sort of environment in which police are more likely to harm and kill innocent residents with impunity. The city tried to hide its misconduct and racially disproportionate practices by manipulating the data, but we are confident the AG’s investigation will uncover the truth and devastating scope of racially disproportionate illegal policing in Buffalo.

This has been a top-down coordinated program from the start. The City’s highest leaders ordered these illegal policies, creating a culture of lawlessness that largely goes unsanctioned; and are now trying to cover it up. The City of Buffalo will never progress and address these serious problems of police  misconduct law so long as it lies about police violence and engages in victim blaming: it erodes trust and also obviates any solution making.  The East Side, and many minority communities, have essentially become a constitution-free zone.