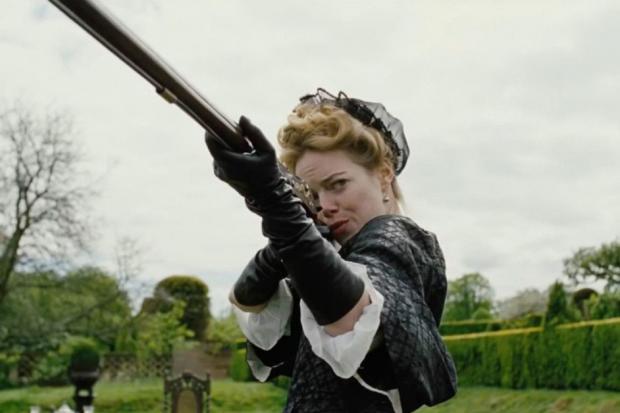 Will the moviegoing public ever get sick of British royalty? It seems unlikely: For as much as everyone seems to enjoy deriding the institution of the monarchy, it remains a source of unending interest, not just in films but in books and on television as well. Victoria has been reimagined of late in Victoria and Abdul and the British TV series bearing her name. Elizabeth and Phillip are put under the microscope in The Crown. George VI’s stammer got its own movie and a passel of Oscars in the process a few years back, and next week brings a new version of the struggles between Elizabeth I and Mary Stuart in Mary Queen of Scots.

For me, a welcome counterweight to all of this royalty gazing has been The Windsors, a hugely disrespectful comedy series (it’s streaming on Netflix) satirizing the generations coming up under the current queen. Very rude and very funny.

You might put The Favourite somewhere in that general category: Though it doesn’t go too much for big laughs, it does not give what you would call a worshipful portrayal of the royals, in this case Anne (Olivia Colman), who reigned from 1702 to 1714. In the last decade of her life, after the death of her husband, she was in poor health, and seldom emerged from her chambers.

Of course, a sickly monarch is still a monarch, capable of conferring great power and status to those in her favor. For years that was Sarah Churchill, Duchess of Marlborough (Rachel Weisz), who manipulated Anne to her own political ends. The Favourite tells the story of how the Duchess came to be supplanted in the Queen’s affects by Abigail Hill (Emma Stone). A cousin of Churchill whose branch of the family had fallen on hard times thanks to her father’s drinking and gambling, Abigail asked for and was given a job in the palace, an act of kindness (and apparently a rare one) that the Duchess came to regret.

Do not mistake this for one of those historical studies that is slavish to the facts, or even to a particular version of them. Scripters Deborah Davis and Tony McNamara take what they need to fit their aim, which is show that there is no real difference between personal and political struggles for power: They’re all about survival. The Duchess feels so secure in her position at the Queen’s side that she never entertains the thought that a mere servant like her cousin could be a threat to her, until it’s too late. And if Abigail’s wiles are less honed, she’s more determined, willing to do whatever it takes to pull herself out of the mud that covers her when she arrives at court.

Already a big hit on the arthouse circuit, The Favourite seems like to succeed as a breakthrough film for Greek-born director Yorgos Lanthimos, whose oeuvre thus far can best be described as distinctive. “Hey, after Christmas dinner let’s take grandma and the kids out to see the new Yorgos Lantimos movie!”, said no one ever: His early films are models of stone-cold European satire, and while his English language debut The Lobster was absurdly hilarious in its satire on human coupling, last year’s The Killing of a Sacred Deer seemed designed to make you think that climate change hasn’t arrived any too soon to wipe away such a nasty species as humankind.

The Favourite is mild stuff by Lanthimos’ measure, though it’s still nothing you’d want to take grandma too: she might appreciate the sets and costumes, detailed to the full ridiculousness of the time, but the sexual frankness of the dialogue is occasionally shocking. And the uniformly excellent performances by the three stars are sometimes buried by the distractingly grotesque photography. If Lanthimos has a peer in recent film history, it may be Peter Greenaway, who was equally fascinated by the distance between the public pomp and private monstrosities of the high born. The Favourite is a film that will be admired more than loved, but there’s nothing at all wrong with that.