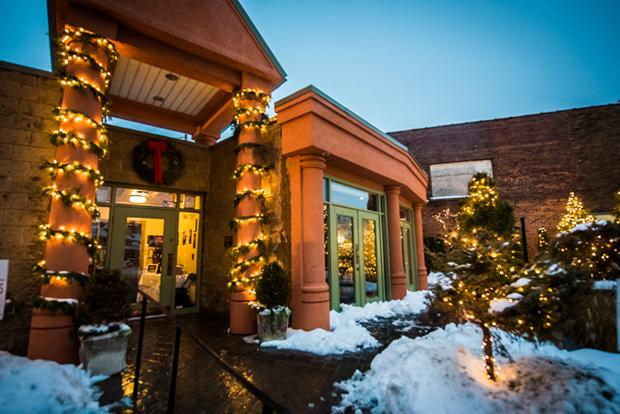 Ristorante Lombardo is all decked out for the holiday season.

Lunch at Lombardo’s: A Holiday Tradition

When the Hertel Avenue shopping season heats up, Ristorante Lombardo opens its doors to the lunch crowd

Tommy Lombardo Jr. has a cold, but you’d never know it. That’s the point, really. Everything about Ristorante Lombardo (colloquially, Lombardo’s) is designed to be done before the guest arrives. The glasses are spotless, as is the flatware. The white tablecloths are draped uniformly, and the napkins folded crisp.

Ristorante Lombardo used to always be open for lunch, Monday through Friday, but eventually, as dining habits changed, the restaurant responded and moved to offering lunch only on Fridays. Tommy Lombardo Jr. welcomes the changes while respecting the restaurant that was opened in 1975 by his father (at 21) and grandfather.

“I try and remind myself that our number one goal is to build a great community to work in and reinvest in the restaurant. It’s really easy to lose sight of that, though—we’ve all been trained to focus on the customer. The way I’ve been trying to think about it is if we can take care of our people, they will take care of our customers better,” says Lombardo Jr.. At this point in the conversation, Lombardo Jr. sounds like a maverick. In reality, however, that is the furthest thing from the truth, as he adds, “This isn’t to ignore the fact that we need to make everyone who comes through the doors feel absolutely important, but no one can do that on their own and it’s a lot more effective if our entire team is working towards that.”

No restaurateur—nor anyone—wants to be at work all the time. How does he make sure that people don’t walk in and get disappointed thinking, “Oh, Tommy isn’t here tonight”? The answer is surprisingly simple. He says “If we’re making our staff members feel special it becomes contagious and now they’re making people feel special.”

“I think of this place as an institution of North Buffalo. Our customers also feel that way, in terms of ownership, too. They talk to me about ‘Our restaurant,’” he says with a slight grin.

Holiday lunch at Ristorante Lombardo sees an interesting mix of clientele: those who are regulars, those who get to try the 40-plus-year-old establishment for the first time (and at a lower price point than dinner), and those for whom these lunches are a holiday tradition.

The menu is pared down. Expect to see a few antipasti and a few secondi, as well as two wines that will be on discount—the dessert menu is the same as at dinner. This year there are rumors that a petite filet mignon and a Niçoise salad will be added to the menu. Reservations are recommended and, as a reminder, the Friday before Christmas is the pinnacle of holiday lunch.

“This is also a story about Hertel Avenue,” Lombardo Jr.,  now in partnership with his father, says of the tradition and the restaurant’s place in it. “People are heading to Hertel Avenue as a general destination.”

Which, according to Tommy, is a new phenomenon over the last few years. People will park and shop then walk down to Ristorante Lombardo and eat, or vice-versa. Referring to the amount of small business development, and new businesses taking over storefronts that were long vacant, Lombardo added, “It’s been wonderful, and mutually beneficial, watching the gaps fill in over the last few years.