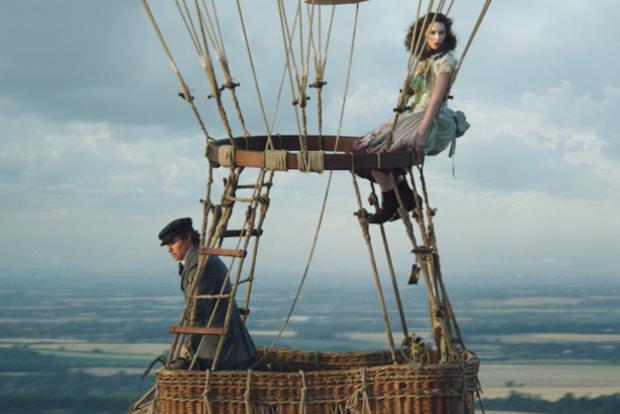 I know that December is a busy month, but don’t put off all your moviegoing until the holidays, when your viewing choice is likely to be limited to Star Wars part whatever. Two of the year’s best are playing now, and unlikely still to be around by the 25th.

The Aeronauts recreates a balloon flight over London in 1862 which set a new record for height, rising to an estimated 37,000 feet—cruising altitude for a modern jumbo jet. There are two occupants. James Glaisher (Eddie Redmayne) is a proponent of the new study of meteorology, laughed at by his colleagues for wanting to make a science of the weather. Amelia Wren (Felicity Jones) is a veteran balloonist, trained by her late husband, with a knack for entertaining the audiences whose admission fees are funding what Glaisher prefers to think of as a scientific venture. While he is adjusting his instruments prior to take off, she arrives at the last minute by cartwheeling onto the stage.

This may not sound like particularly compelling stuff, and I admit to having been dubious when the preview started. but The Aeronauts has three things going for it that held me rapt. Of course there’s star power, with Redmayne and Jones, who are for the most part the only people on screen, reunited after the Oscar-winning Stephen Hawking biopic The Theory of Everything. There is visual panache that made me feel at all times as if I was in this gas-powered balloon floating miles above the ground, for which credit a combination of special effects and some shooting from a helicopter with the actors 2,000 feet in the air—hardly as high as the actual flight, but higher than you will ever get this acrophobic reviewer.

And, perhaps most surprisingly, there is contemporary relevance. Like The Current War, this is a movie about a milestone in a technology that we now take for granted. Justifying his studies to his dubious colleagues, Glaisher looks forward to a day when studying the weather will help us “prepare for famines and floods.” That we fail to give this science our faith may be the death of us yet if you don’t start listening.

One caveat: movies are a terrible way to learn history. Glaisher actually existed, but Wren did not. She takes the place of Glaisher’s actual co-pilot, Henry Tracey Coxwell, who saved both their lives when the scientist passed out from lack of oxygen at a high level. The producers wanted to have a female counterpart, which is understandable in dramatic terms but (much as I enjoyed Jones’ performance) otherwise indefensible. They argue that Wren was inspired by various other female scientists and balloonists. But it is hardly paying tribute to those women by subsuming their stories into a fictional creation. Now playing at the Dipson Amherst and Eastern Hills Mall theaters.

In another era, writer-director Noah Baumbach would be a household name, at least in households where moviegoing was a common pasttime. But in an era where human drama with a humorous edge has been relegated to the living room screen, his body of consistently intelligent and amusing films has never found the audience it deserves. His latest, Marriage Story, stars Adam Driver and Scarlett Johansson as a couple trying to hold on to their souls and sanity while divorcing. It is consistently getting awards from year-end polls of critics groups, with Driver a front runner for a Best Actor Oscar (and deservedly so).  Watch it on Netflix if you must, but until the end of the week you can see it onscreen at the North Park Theater, the far better choice.