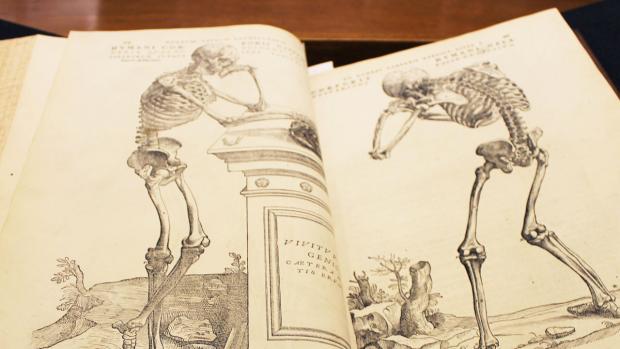 Back in the 1930s, Chauncey Hamlin, the mainstay backer of the Buffalo Museum of Science, acquired for the museum an original edition of the book that launched modern science and the modern world, mathematician and astronomer Nicolaus Copernicus’s De Revolutionibus Orbium Coelestium, on the heliocentric theory, published in 1543, the year Copernicus died.

The acquisition launched Hamlin’s project to amass for the museum the best collection of original edition historical science books anywhere. He arguably did it. In the 1990s, the full collection was purchased by the Buffalo and Erie County Public Library, where the cream of the collection is currently on view in a marvelous display on the second floor of the downtown library. (Where there used to be library books, until Chris Collins became county executive and cut allocations to the library and other cultural institutions to the bone and beyond, ostensibly for fiscal responsibility reasons, but also no doubt just Republican animus against cultural institutions in general. People who read books and go to the theater are not likely voters for Chris Collins or Republicans in general.)

The first book in the exhibit—each book is in a separate podium vitrine—is the Copernicus, open to Latin text and Copernicus’s illustration of the supposed circular orbits of the known six planets, and outer circle of supposed fixed stars.

And right next to it, the book that made so much trouble for Galileo, proclaiming essentially the same idea—the heliocentric theory—almost a hundred years later. His Dialogo dei Massimi Sistemi, published in 1632. Why the problem for Galileo? The vernacular language for one thing. Italian, not Latin. Latin the language of scholars, who all—just about all—by Galileo’s time knew the heliocentric theory was correct, just didn’t know how it comported with the Bible. Italian the language of everybody else, for whom the heliocentric theory was a little scandalous as well as seriously counter-intuitive. The vernacular language and Galileo’s somewhat pugnacious general attitude. The spokesman for the Aristotelian/Ptolemaic (versus heliocentric) system is a character named Simplicius, translatable as Simpleton.

Whereas Copernicus wrote not just in Latin, but an abstruse, formidably mathematical version of it. Though it also helped Copernicus avoid contention over his theory—or at least personal involvement in any contention—such as dogged Galileo for his last decade or so—by dying the year his book was published. Or maybe waiting until he saw the grim reaper on the near horizon before publishing.

The vernacular versus Latin matter is another modern world marker. Phase two modern world. Galileo’s book—of the volumes on exhibit—was the first in the vernacular. The next, French philosopher and mathematician René Descartes’s Discours de la Méthode, 1637. Next after that, Irishman Robert Boyle’s The Skeptical Chymist, 1661. But the regular practice of the time remained to write science books—scholarly books—in the language of Cicero and Caesar. The latest date Latin volume in the exhibit is Swedish botanist Carolus Linnaeus’ Species Plantarum, 1753.

The only non-science book—book portion in this case—is a single page from a Gutenberg Bible, the first moveable type printed book, black letter, about 1450.

The ancient Greeks are represented by Renaissance editions of their works in Latin. Aristotle, Hippocrates, Galen, Ptolemy. In recollection of Rembrandt’s famous depiction of Aristotle Contemplating the Bust of Homer, next to the Aristotle podium—his volume De Animalibus—for contemplation, is a bust of Aristotle.

Leonardo da Vinci, who lived from 1452 to 1519 and did everything except publish, is represented by an 1883 volume of snippets of his drawings and handwritten related Italian text from his notebooks on right-hand pages, English translations on the left-hand pages.

Copious illustrations throughout. Most of the volumes are opened to illustrated pages. Line drawings and engravings and in some cases woodcuts, sometimes in color. As in German physician and botanist Leonhart Fuchs’ De Historia Stirparum, a catalog of medicinal plants, 1542, notable for its more than five hundred detailed colored woodcut plant illustrations by various German artists of the time. But nothing among the illustrations more beautiful than a superb miniature and facing page spectacular gold leaf boxed initial letter on dark blue background with faint floral tracery in the Galen volume, Opera, 1490. Essentially medieval art.

The science books collection was once slated for Christie’s auction by the cash-strapped Science Museum, but following considerable community protest of that idea, a deal was worked out with the library, which traded an incomplete edition of John James Audubon’s Birds of America—the library had and has another, complete edition of the Audubon masterwork—for the science books. The museum then auctioned off the incomplete Audubon to bolster its coffers.

There’s still time to catch this exhibit. It runs until September 2017.