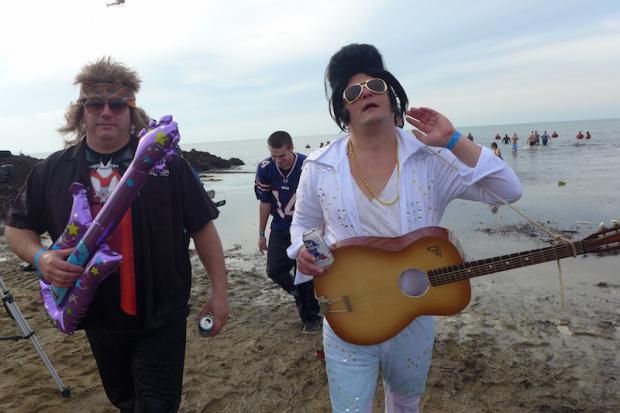 This past weekend featured interactions with two divergent icons: one of them representational, musical and of international renown; the other local and ostensibly intergalactic. Elvis Presley and Promo the Robot made appearances in Western New York—Elvis on the shores of Lake Erie and Promo on the ice of Rotary Rink in downtown Buffalo.

Tributary Elvises appear for a number of festive reasons, while Promo, who has enjoyed an extended sabbatical, is enjoying a renaissance. Promo is back, to the delight of those who remember him from his Rocketship 7 days. He’s also making new fans.

Polar Plunge, a national organization benefitting the Food Bank of Western New York by way of diving into wintry waters (“Freezin’ for a reason” is their cris de coeur) after pledges are collected, happened locally on Hamburg’s Woodlawn State Park Beach December 6. This was the eighth annual plunge, also with attendant pre- and post-parties.

Woodlawn Beach, still ringed with heaps of now-dirty snow from the recent Knife storm belt, was packed with food trucks, participants in various waterproof ensembles, participants in non-waterproof costumes, legions of emergency works, and spectators holding cameras—and towels. Among the hundreds who took to the water was “Elvis” and his “Canadian rocker” sidekick in a battery-powered mullet with fiber optic lights.

Chris Kinsley (Elvis), and Dave Deck (Canadian Rocker) work at National Fuel, in the Security and Land departments, respectively. This was Chris’s seventh Polar Plunge and Dave’s premier plunge. National Fuel, according to Chris, is a recurrent Best Team Costumes awardee and in the past he’s dressed as a professional wrestler, Star Wars character, and a Flintstone. His Elvis costume, acquired online from various sources, featured a non-working guitar “from the garbage.” “It’s a family heirloom!” his uncle, fellow plunger Brian Deck, said.

The National Fuel team raised approximately $4,000 and many were headed out to a local establishment to socialize and warm up. The secret to a successful plunge, according to Chris, is “to hydrate before going in.”

Promo the Robot, like canine heroine Lassie of similar vintage, was not a lone iteration. There was a succession of Lassies, and there were two Promos: The first was created in 1962 and the second a few years after, a more streamlined quasi-human. The second promo was unpainted but received a snazzy, multi-colored paint job in the 1990s before he was mothballed in 1993. Both Promos were on display at the now-defunct Toy Town Museum at Fisher-Price for a time before Promo2 sat idle in a storage room at WKBW 7 Eyewitness News. Promo1 is mysteriously MIA; WKBW expressed hope that this Public story leads to his recovering.

Sherry Burns, WKBW’s senior promotions producer and fan of the robot and his Rocketship 7 oeuvre, felt it was time for a Promo reemergence. In the past month he’s appeared, appropriately, at Food Bank of Western New York fundraiser “Robot Holiday” at Larkinville, and will be prominently featured in upcoming holiday spots for the station.

The Public was granted an exclusive interview with Promo and the man inside the robot, Charlie Mikolajczyk, WKBW graphic designer, who’s only the third man to play the lovable steel hulk. We met on the ice December 7. Kids, wobbling their way around the rink, were delighted to see the robot.

What’s it like to be Promo? “It’s like miming,” Charlie says, “you have to overdo everything, slowly move around and be prepared, his wings [his wide metal shoulders] could take someone out. He weighs a ton—actually 40 pounds. The costume rests on shoulder pads and you have to look out of his mouth. Visibility is not the best.”

He wiggles his way out of Promo and, with the body standing straight up, points out his parts. Telephone mouthpieces for ears, taillights on his body, knobs that operate Promo’s lights (recently rewired by meteorologist/tinkerer Andy Parker), and his now-missing rotating antenna atop his lunky head. “His legs are industrial rod roots,” Charlie says. “For machinery. They protect metal parts.” Despite seeing how Promo comes alive and gets ready for transport, it’s magical to be in the presence of this ageless and animated charmer.