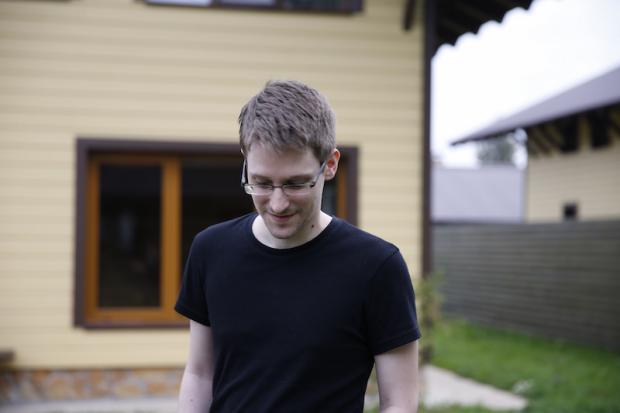 At a news conference last year, President Obama objected to some people’s efforts to champion and celebrate Edward Snowden, the National Security Agency’s contract employee who revealed the agency’s vast, secret surveillance program. “He’s no hero,” the president said. A video snippet with his comment is included in Citizenfour, Laura Poitras’s often fascinating, sometimes unconventional documentary about Snowden’s public release of classified evidence of the US government’s spying capabilities, and practices. Not included is the president’s observation that he was receptive to having a national conversation about the appropriate scope of governmental surveillance of American citizens and foreigners. A conversation that presumably would be inspired by the same rebellious conduct of Snowden that Obama had just condemned, and for which his administration was seeking to arrest him, going so far as to provoke an international incident. (US war planes forced a plane carrying the President of Ecuador down in Europe because it was mistakenly thought Snowden was on board.) If the president recognized the disturbing irony in this, he hasn’t signaled it, and no one should expect that to happen.

Meanwhile, we have Citizenfour to spike and inform that vital discussion. What Snowden made public through selected journalists was the mass surveillance of Americans under NSA programs codenamed PRISM and XKeyscore, and the misrepresentations about them made to the US Congress by senior intelligence officials. In a message to Poitras, Snowden said they had lied, “and I can prove it.” And so he has.

A lot of Poitras’s success in rendering this story, and a picture of the young man at its center, seems, in retrospect, to have been fortuitous. This by no means diminishes her skill and application. But she did more or less luck into prime, even extraordinary access to Snowden. He chose her for that access. Poitras is the director of two previous films focusing on individuals impacted by American’s war on terror—My Country (2006) and The Oath (2010)—and Snowden was apparently aware of them. When he fled the US for Hong Kong last year with four laptop computers containing abundant evidence of the government’s vast, and arguably illicit, spying operations, he contacted her. “I will likely be implicated,” he wrote, “This must not deter you.” It didn’t, and she wound up in his Hong Kong hotel room, along with Guardian newspaper columnist Glenn Greenwald and reporter Ewen MacAskill.

Poitras’s movie serves as a summary of eight days of conversations in that room with a holed-up Snowden, as Washington tumbles to the reality of what he’s done, and begins to take very aggressive code-red measures to find him. Snowden left the States without telling his girlfriend what he was doing and we see him telling his guests that she’s been harshly confronted by federal agents. (The feds have gone so far as to block her access to their bank account so she can’t pay their landlord.)

In his increasingly threatened hotel redoubt, Snowden is sharing explosive material from his pilfered store of official secrets and instructing the two journalists in how to protect it. The viewer is something like a fly-on-the-wall, observing what went on there, with a striking absence of directorial mediation. There’s a you-are-there quality to these sequences, except it’s real and spontaneous, not dramatized. At one point, it becomes clear that MacAskill showed up without being quite sure who Snowden was.

Citizenfour can be seen as a kind of virtually unprecedented historical document, a recording of an important transaction in the history of espionage and state security. The resulting series of cinematic sketches of Snowden are instructive and involving. At least here, he comes across attractively, resembling neither the wildly dangerous provocateur and wrecker he’s been accused of being, nor someone who’s hopelessly innocent politically. For long moments, Poitras trains her camera on him as he sits on his bed, watching CNN coverage of his dangerous adventure, and speaking calmly but realistically of his imperiled situation. He tells the journalists that he shouldn’t be the story. He wants what he regards as the official transgressions against the Constitution and the American people to be its central focus.

Sometimes, Poitras’s approach can make for slow going, but cumulatively, the portrait and record are unusually revealing. She frames the Hong Kong scenes with video selections from related events and interviews with a civil rights lawyer who says that anyone who wishes to protest against secret government spying on Americans engaged in no suspicious or proscribed activity is faced with dauntingly few and difficult options, in and out of court.

Citizenfour isn’t the slickest documentary in recent memory by any means, but it’s engrossing and distressing in its own way, and indisputably important.