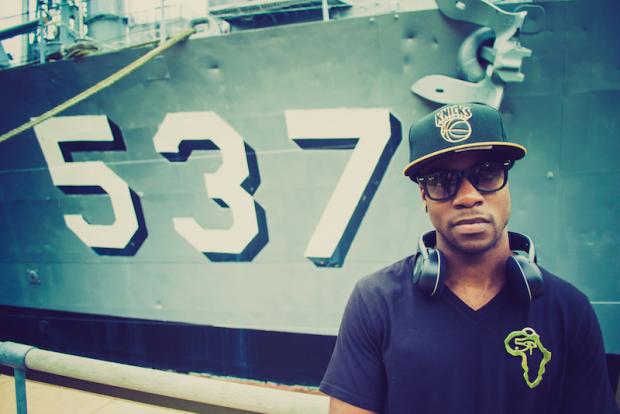 At age 25, DJ Sike has become a fixture on the Buffalo hip hop scene. With residencies at the Blue Monk on Monday nights, where he plays funk classics with DJs Cutler and LoPro; Duke’s Bohemian Grove Bar on Thursday nights where he gets deep into classic hip hop tracks; and SoHo on Friday nights, where he can let loose some trap and EDM; he’s become one of the hardest working DJs in town. As a child, hip hop was banned in his household, says Sike, so his taste in hip hop today is informed by the classic rock and gospel music that was on repeat at home. Sike stepped up to the decks for the first time about three years ago, after some inspiration from another Buffalo turntablist, DJ Simple. “He taught me how to DJ,” says Sike. “He actually embraced me and put me on to vinyl and turntables.” His first gig was Battle at Buffalo, a monthly breakdancing competition at Verve Dance Studio, which he still DJs the last Saturday of each month. This week Sike took a look into his record crate and picked out six records he can’t leave home without.

Prince is arguably one of the greatest artists of all time, and in my opinion “Controversy” is one of his best releases. This song is forgotten by many, but instantly recognizable by fans and non-fans alike. Released in 1981, this is one of the many 80’s pop hits I can always turn to.

This record is one record I have that has a hit on both sides, but the B-side is more popular than the A-side. A 1990’s new-jack swing hit, “Feels Good” is another one of those songs people remember and everyone knows. It’ll always have a place as a popular party anthem.

“I Wanna Dance With Somebody” by Whitney Houston

I added this song to my sets when I first started DJing. It usually doesn’t matter what song or what type of music is being played, this uptempo track will always be a “go-to” and remains popular. This also has one of my favorite vinyl artwork sleeves; depicting Whitney in her prime. Rest in peace, Miss Houston.

I don’t get to play this record often. Most people don’t know what it is until the chorus, which is widely known as the sample from Eric Prydz’s 2004 hit “Call On Me.” Still, every once in a while it’s played so people can hear where the original interpolation comes from.

“Bound” by Ponderosa Twins + One

Found this record shortly after Kanye West’s “Bound 2” song came out. It’s an obscure song, but it was beautifully arranged and sung; reminiscent of an early Jackson Five record. Even though people don’t know it, the sampled chorus makes it easy to remember. I like to play songs like this near the end of my set.

This is usually the last one; many don’t expect it, but I play it to remind people not only of Frank Sinatra, but also the meaning of the song, which is to accept life’s difficulties and never let anyone keep you down—especially in the face of adversity—because the world is going to keep moving.