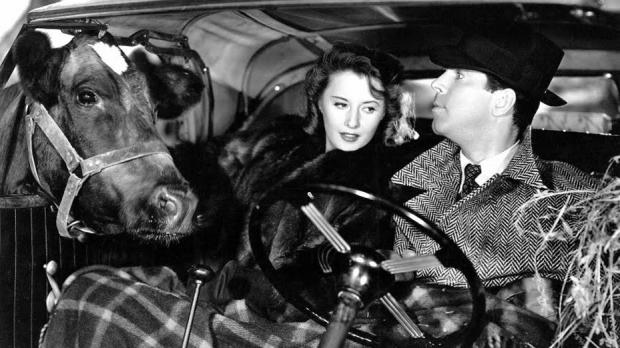 As a holiday thank you to its readers, The Public is sponsoring a free screening next Monday of my favorite classic Christmas movie, Remember the Night. If you’ve never heard of it, don’t feel bad; it went unseen for years, but has been picking up a passionate following in the past few decades, much the way It’s a Wonderful Life did in the 1970s.

The 1940 film stars Barbara Stanwyck and Fred MacMurray in their first teaming, four years before making screen history in Double Indemnity. Stanwyck plays Lee Leander, a shoplifter who gets arrested for the third time a few days before Christmas. MacMurray is John Sargent, the cynical assistant DA assigned to prosecute her. They discover that their hometowns are a few miles apart in Indiana, and a temporary truce puts them on the road home for the holidays. When John sees the harsh upbringing Lee was raised in, he brings her along to spend Christmas with his own family, who don’t know that he’ll soon be taking her to jail. Or will he?

Remember the Night was directed by Mitchell Leisen from a screenplay by Preston Sturges, his last before he moved into the director’s chair to create such classics as The Lady Eve (also with Stanwyck), Sullivan’s Travels, Hail the Conquering Hero, and The Palm Beach Story.

The idea of a movie teaming the stars of the quintessential film noir in a script by one of Hollywood’s most hilarious directors seems odd. But they balance perfectly for a story that is as realistic as it is sentimental.

Mixing comedy, romance, and a touch of dark melodrama, it offers a touching and believable story of redemption. I don’t like to give away too much of the plot: One of the wonders of the film is the charm it brings to a story that sounds banal if you try to summarize it. By any standard it is an unheralded classic.

Remember the Night will be shown on Monday December 15 at 7:30pm at The Screening Room (3131 Sheridan Drive, Amherst, 837-0376). Admission is free, but donations to the Food Bank of WNY are encouraged, so bring your checkbook.