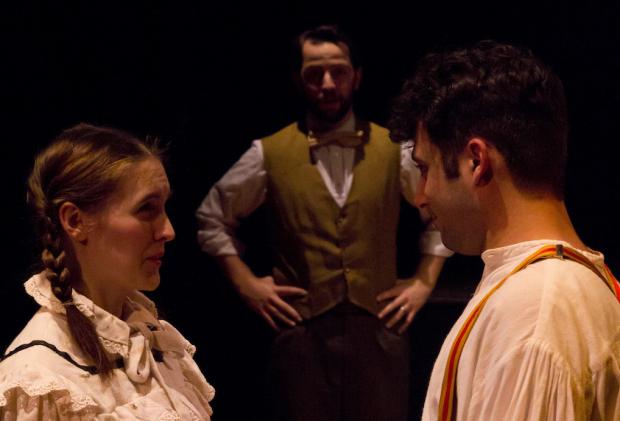 Renee Landrigan (left) in The Adventures of Tom Sawyer at the New Phoenix. Photo by Alan Dunaway.
by
Anthony Chase
/ Dec. 9, 2014 9pm EST

Currently appearing as Becky Thatcher in the New Phoenix Theatre production of Tom Sawyer, Renee Landrigan established herself as a go-to leading lady soon after she graduated from Niagara University with a BFA in theater performance and a BA in mathematics. Equally skilled at musicals and non-musicals, at NU she was Mabel in The Pirates of Penzance, Jo in Little Women, and Little Sally in Urinetown.

Typically, Renee projects a no-nonsense sensibility and focused intelligence onstage that has been useful in a variety of roles. After graduation, she appeared in Next to Normal at the Irish Classical Theatre (Artie nomination); in Rent, Talk to Me Now, and The Drowsy Chaperone at MusicalFare; in Bloody Bloody Andrew Jackson at American Repertory Theatre; in Mark Witteveen’s A Very Fine Use of a Grenade at Road Less Traveled; and in Assassins for Second Generation.

What word would your friends use to describe you?
Nerdy.

What quality in your current character is most unlike your own personality?
Becky is very open about her emotions. I tend to hide my true feelings.

What quality in your current role is most like your own personality?
We both crave adventure and love.

When and where were you the happiest?
I’ve had a lot of good moments in life. It’s hard to choose just one.

What is your greatest fear?
Failure. Cliché, but true.

Which talent do you most wish you had?
I wish I could play the guitar.

What would you change about your appearance?
My tooth-to-gum ratio.

What trait do you most dislike in others?
Rudeness.

What is your guilty pleasure?
Watching Korean variety shows.

Who is your favorite fictional hero?
Elizabeth Bennet from Jane Austen’s Pride and Prejudice

Who are your real life heroes?
My grandparents. My grandmother in particular, who always managed to get through adversity with a smile.

On what occasion do you lie?
If I feel they “can’t handle the truth!”

If you come back in another life, what person or thing would you like to be?
An indoor cat. They just get to sleep all day.

What is your motto?
“Faith, Hope, Love.”