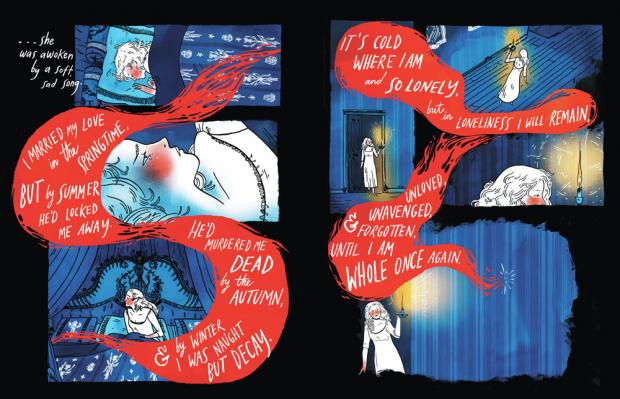 It shouldn’t be considered a novel genre at this point, some 25 years after Art Speigelman’s Maus claimed literary legitimacy for comic artists everywhere, but graphic novels continue every year to gain traction in the soil of global literature. Anyone who has been following the medium all these years will agree that graphic novels, or comic art broadly, can offer powerful and immersive reader experiences. Our writers, comic artists themselves, have selected six new titles from the field that can appeal to anyone on your gift list. All are available at both locations of Talking Leaves (Elmwood and Main St. locations) and Queen City Bookstore.

Box Brown dramatizes scenes from interviews, television appearances, wrestling matches, and third-person accounts in this comic book portrait of the infamous professional wrestler. André Roussimoff was born in France and suffered from gigantism. The book follows his life as he finds international success as a wrestler (and later, an actor in The Princess Bride), filling out the story of his career with revealing anecdotes and road stories. With the close eye of a lifelong wrestling fan, Brown analyzes some key matches, demonstrating why André was such a popular entertainer (it wasn’t just his size). We also see the tremendous pain he suffered due to his condition, leading to regular bouts of heroic drinking. Beyond the physical pain, we feel the loneliness of a man who lived in world in which he never quite fit; his fight to fit into that world, through performance, reveals its own costs (he chooses not to have a relationship with his daughter, for example). By portraying fragments of André’s public and private life chronologically, Brown creates a story that feels more authentic than those created by the linear plots of standard biopics, making this the perfect gift for a thoughtful lover of pop culture. –JV

As the follow up to her #1 New York Times bestseller, Smile, Raina Telgemeier explores the complicated relationships between siblings in this subtle coming-of-age story. Most of the memoir takes place on a road trip from San Francisco to Colorado for a family reunion. Raina, her sister Amara, and a younger brother accompany their mother on a drive that proves challenging for everyone. The memoir moves between the past and present to show readers how family patterns evolve and relationship dynamics are often unpredictable. Telgemeier examines her conflicts with the big sister role because she finds it difficult to relate to a sister who can be aloof, temperamental, and sometimes downright annoying. Her expressive drawings capture the emotional reality of being young and negotiating one’s place in a family. There is a lot in this book for young readers to enjoy and recognize, but the depiction of a Walkman may raise some questions. Parents should be ready to explain that one! -RV

The independent comics community has its eye on Sam Alden, who in the last two years has been astounding readers with his versatility as an artist and maturity as a storyteller. This, his first published collection of short stories, acts as an excellent introduction to what could be a long career. Drawn in pencil, with the ghosts of erased lines still visible, “Hawaii 1997” captures the memory of one night in Alden’s youth. The drawings have the appearance of sketches which lend a personal, handwritten feel to the story, but they expertly capture the contrast of stars in the sky, stars in the water, shadows of trees on bodies, shadows of bodies on sand. When Sam removes his glasses, the landscape is smudged, and we are in his eyes, chasing after mysteries in his memory that are at once vague and vivid. “Anime” is a tighter study of an awkward young American woman who is so obsessed with characters and worlds from Japanese animation that she imagines Tokyo as a place where she can belong. So she moves. Alden draws both environments in ways that feel alienating, telling a story with subtle gestures and expressions reminiscent of Adrian Tomine. If the fiction in the New Yorker embraced comics, “Anime” would fit right in. –JV

Liz Prince brings her simple line drawings and wry sense of humor to the topic of gender identity. Prince shares her struggles against the limits of gender roles and thoughtfully examines moments from her childhood that reveal the ingrained expectations of girls. At an early age, the author wants to be a boy. She prefers boys’ clothes, Battle Beasts, Ghostbusters, and the sense of agency boys are given. Her childhood role models include male figures like Luke Skywalker and Indiana Jones, yet she has crushes on boys and must navigate the changes of female puberty. Prince’s experience also includes episodes of bullying and school yard violence. Her talent for one-liners and self-deprecating reflections keep the narrative moving through her school years and various key friendships. Ultimately, Prince finds a friendly place in the punk and comic book subcultures where rules are meant to be broken and authenticity is respected. A great gift for teens. -RV

Through the Woods by Emily Carroll (Margaret K. McElderry Books, $14.99)

A man secretly murders his brother out of pride and jealousy. Soon after, his brother emerges from the woods, unscathed and smiling. In another story, a monster from the woods threatens to possess a teenage girl, promising not only that friends and family won’t suspect anything but they will be happy she is no longer sullen, depressed, and plain. The woods in Emily Carroll’s horror stories play a transfiguring role; reality is twisted to bring out deep-seated fears. Even when the woods don’t play a central role, their transformative power persists. In these five tales, Carroll uses the language of comics to its full extent: words become visual elements in the story, colors are metaphors that inform the text, panels are juxtaposed to reveal hidden meanings. Although these are all original stories, their elegant narratives feel as timeless as fairy tales. Readers of Angela Carter and fans of creaking doors will really treasure these comics. –JV 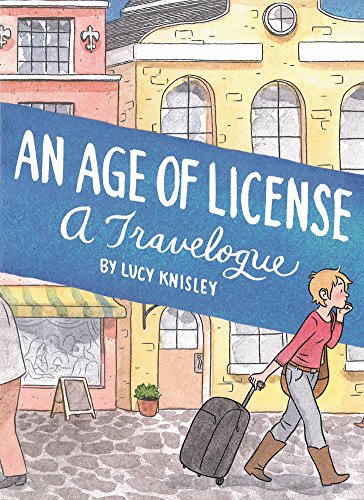 An Age of License by Lucy Knisley (Fantagraphics, $19.99)

A young American artist takes a whirlwind trip through Norway, Sweden, Germany, and France in this new autobiographical travelogue. Knisley was invited to be a special guest at the 2011 Raptus comics fest in Bergen, Norway but the trip soon includes a stop in Stockholm to spend some time with a new romantic interest. Soon she is off to Berlin to visit friends and on to France for a stop with her mother in Royan. The author moves through all these different places with a delightful attention to detail: she presents plates of food from her various meals, she describes long walks through interesting sites and she always allows us to see into her swirling thoughts. Knisley’s writing always makes room for the anxiety, confusion, and fear that often come with our experiences. Her drawings beautifully translate complicated feelings into fun and surprising images. The title of the book comes from a conversation with a man in France- he tells Knisley it is a phrase that the French use to describe that period when young people are experimenting with their lives and careers before they settle. It’s an idea that comforts both author and reader because it allows us to embrace adventure and exploration. -RV

Rebecca Viola is a writer from Buffalo and Jason Viola is a comic artist. They both live in the Boston area and write about independent comics for Festival Season.