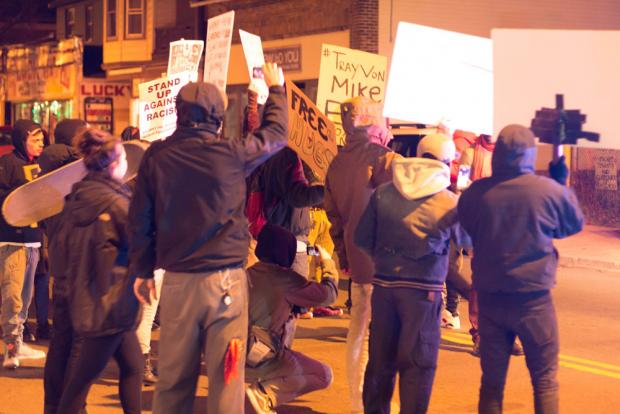 A holiday-themed event on Grant Street to promote a reinvented business district was interrupted by a spillover of protests that occurred throughout the city–and country–last Thursday night. The fourth annual Peace, Love and Grant Street began with business owners hanging extra lights and extending their hours in the hopes of encouraging Buffalonians to do some local shopping this season and ended with the flashing lights of police cars.

The idea to extend business hours and create a holiday-themed event sprang out of a Grant-Ferry stakeholders meeting three years ago. It was decided that keeping these businesses open would not only help the owners and the shoppers, but would shine a light on Grant Street that many have not seen before. They hope the event will continue to grow for the foreseeable future.

New and familiar stores like West Side Stories, Shakti Yoga, and many more, opened their doors and welcomed the community. The event will serve as a kick-off to start “Thursday on Grant Street” where shops will offer extended hours to shoppers.

Sweetness 7 was one of the stores that opened their doors, not only to shoppers, but also to pop-up vendors. People like Rory Calabrese, a jewelry maker from Olcott Beach, who grew up on Grant Street and loves to support it, stopped by to showcase their wares and give back to her old neighborhood. Calabrese’s shop, which is usually open only in the summer, offers many different jewelry pieces at fair prices. Calabrese said she loves Grant Street and would “love to see a bigger success.”

Many other pop-ups lined the brick walls of Sweetness 7, including jewelry made by hobbyist Kristen Rhodes, tea made by Hollie Lafrenier, and a stand of printed material from the Western New York Book Arts Center (WNYBAC).

Every year, something new comes to this event as the business district begins to take flight. The up-and-coming roaster and cafe, Public Espresso and Coffee, had heads turning this year with a pop-up market and gallery inside of their still under-construction storefront, with co-founder Sam Scarcello offering samples of their product. In addition to opening the Grant Street location in spring of 2015, Scarcello is planing to open up shop with an espresso bar in the historic Hotel Lafayette.

One of last year’s first-timers the Gypsy Parlor, opened their doors to celebrate Peace, Love and Grant Street, setting up a Christmas Tree in their already colorful bar. Gabrielle Mattina, owner of the Parlor, stresses that Grant Street’s melting pot vibe adds to the great feeling of the neighborhood. “The store owners are showcasing all the things our street has to offer,” Mattina said. “We really hope to kind of brand Grant Street as a market district.” Products from seemingly each corner of the globe make their way to the stores on Grant Street.

The mood inside the Westside Bazaar was eclectic and bright, fitting the organization of the Bazaar as something of a permanent pop-up shop with multiple gift and food vendors featuring the work and flavors of the neighborhood’s residents. An Ethiopian dance group held session right in the middle of the store. Patrons gathered around to see the Jama Jama Community African Drum and Dance Ensemble sing and dance their hearts out, and some even participated in some of the singing themselves. “I really like the music,” said Aster Mekonnen, a worker at Westside Bazaar who makes Ethiopian coffee at the shop.

Grant Street holdover and owner of Chi-Chi’s Hardware, Juliet Hevland, sang the praises of Peace, Love and Grant Street:”I think it turned out beautifully.” Hevland described her shop as “her adventure.” After growing up on Grant Street for years, she is happy to serve her community in any way possible. She speaks highly of the neighborhood, the connection they all have, and the growth potential of the area and looks forward to next year’s Peace, Love and Grant Street event already. “We want to have bands and a chorus next year,” Hevland said with a wide grin.

If nothing else, this event does establish a very family-oriented theme. That the neighborhood and store-owners have a certain connection with one another. The people of Grant Street care about Grant Street, and in extension, the West Side. Joe Petri, who co-owns Westside Stories, along with his wife, said it best: “If we couldn’t open a bookstore here, we weren’t going to open a bookstore.”

While the neighborhood and its businesses were certainly able to provide the atmosphere of peace and love, a group of about 35-50 activists protesting the recent deaths of unarmed African-Americans in other cities–more specifically, Eric Garner of New York City–moved in on the event from an earlier protest on Elmwood Ave. shortly after 7 pm. The protesters landed in the vicinity of Grant and West Delavan chanting “black lives matter,” and “this is what democracy looks like.” The protesters, along with the other protesters around Elmwood who staged the die-in, effectively blocked traffic by flooding the street. The event remained peaceful, but the family-oriented event happening around them seemed confused by the protesters who confronted police on hand crying ”fuck the police!”

Even with the outcry of justice and democracy inconveniencing those who wish to enjoy the event, Grant Street came together in one way or another. It is the people of Grant Street that make it what it is, the goal of Peace, Love and Grant Street is not only to bring unique and fair priced products to the area, but to bring the community together as a whole.