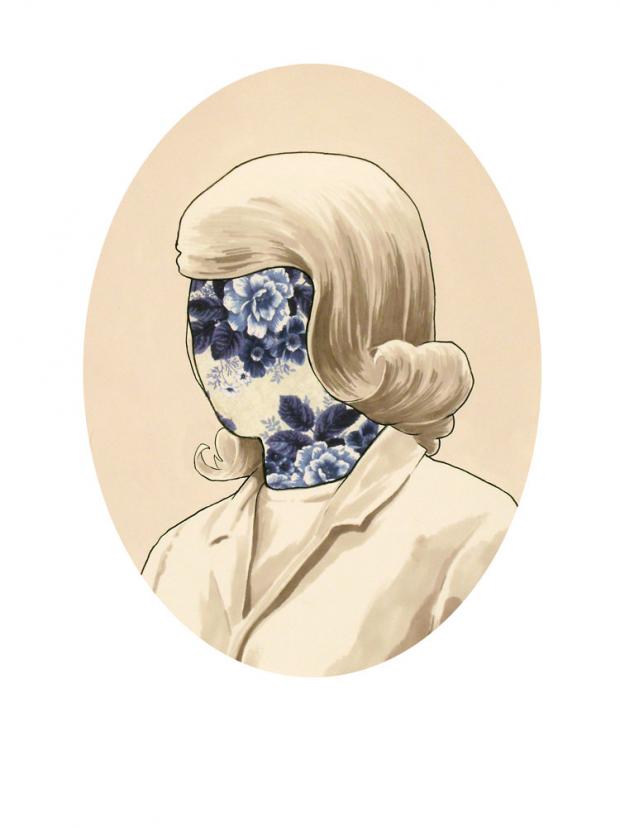 Untitled (From Drift) by Adam Weekley.

Artists currently on show at the BT&C Gallery include gallery regulars and a generous sampling of irregulars. Twelve artists in all in various categories and with no general thematic, though a few themes seem to emerge impromptu, such as hair, wallpaper, cartoon comical drawing.

Hair is a personal theme and motif of artist Amanda Besl, one of the regulars. Known for her paintings of luxuriant tresses in flowing patterns, under water and dry, curls and swirls, sinuous, sensuous, evoking the art of the 17th century, art of the baroque, Bernini. The works in the current exhibit are more fundamental, elemental examples of the hair motif, and seemingly more personal. The artist calls them self-portraits. In pencil on paper versus paint on canvas, so black and white versus color, and just hair—not on someone’s head, but more like strands and clumps of hair pulled off of a hairbrush, that had previously pulled it off someone’s head in vigorous brushing—and more snarls than swirls. As artworks, much less elaborate—though not less complex—than the paint treatments. Minimalist hairworks.

The hair theme crosses over into Adam Weekley’s series of portraits in quaint oval frames of country and western singer Dolly Parton, though lacking her actual face. The face part of the picture—where her face should be—is daintily patterned wallpaper, or sometimes nothing at all, blank. Just her hair, a variety of signature overdone dos, piled a foot or so high above her head—where her head should be—flesh and bone.

Better examples of Weekley’s art are several cartoonish drawings in ink on paper. One of the lower legs and feet—in socks and maybe long johns—of an otherwise out-of-frame skinny guy tracking through six-inch-deep snow, leaving a trail. That’s all. The uncanny quality—in the sense of character, and in the sense of excellence—of Weekley’s art seems more about attitude than idea, significance. Blithe is a term that comes to mind. Idiotic in a good sense.

The wallpaper theme crosses over into Millie Chen’s Chinese-motif actual wallpaper—described as found wallpaper on the identifier label, but then she doctored the original idyllic scene with added comical figures and elements. The original design consisted of a continuous vine structure on which musicians and such—but acrobats all, apparently—played and cavorted. Chen added various Caucasian figures, including a kind of Tom Sawyer mate to an existing Chinese lad, and supplied the pair with a hand saw, portending mayhem under the circumstances. A little monkey out on a limb also gets a handsaw. Other figures include a man in modern business suit and tie and Napoleon hat, and a lady in 18th-century full-skirt costume swinging on a swing, à la the painter Fragonard.

Susan Reedy has several collages of torn bits and pieces of vintage sheet music. Julian Montague has a digital print overlay tangle of solid forms and outlines of various bugs. Gary Sczerbaniewicz has some graphite and pen and ink drawings of cutaway views of ostensible ironmaking and steelmaking furnaces and associated apparatus and materials. Joe Bochynski has doctored photo illustrations of unlikely proposed monuments, for example, a grain elevator in the middle of Hoyt Lake in Delaware Park, and a pyramid in the middle of Central Park in New York City. Tom Hughes’s drawings feature bizarre architectural outgrowths for messaging purposes, like signboards, on vernacular Buffalo structures. Messages as bizarre as the outgrowths, such as “No one knew so we just made it up,” and “Of course we lied,” and “Nothing happens next.” The outgrowths in Michael Beitz’s drawings are more organic than architectural. A couch sprouts a huge arm at one end. An overstuffed chair sprouts redundant chair elements until it’s hard to see it any more as a chair, hard to imagine someone could sit in it. A straight-back chair has one of its legs bandaged at the bottom, like it’s gouty. Marshall Schuettle has some lush-looking large-format photos from his show a while ago at CEPA.

And Pam Glick has a large-format gold background with whitish little figures in silhouette all in all depicting a communal event immersion baptism, some of the little folk in the water, some on the shore, and a few with cartoon-like thought bubbles rising above their heads, thinking something, though who knows what. She also has a series of minimalist drawings akin to the old movies visual joke about a man walks and disappears behind a tree that’s narrower than he is wide, then a second or so later emerges on the other side of the tree. The series is about a pole dancer. You see the pole, and parts of the dancer—an arm here, a leg there, maybe an elbow—protruding from behind it, or maybe wrapped around it.

The multi-artist exhibit continues through December 20.