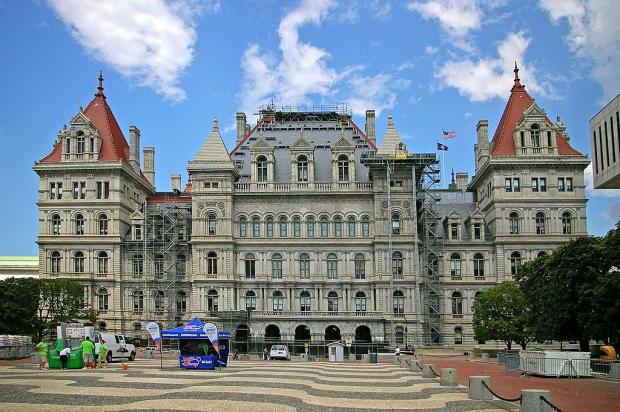 In 1980, with Ronald Reagan sweeping into power, two young men named Paul Manafort and Roger Stone had an idea: Why not lobby the man they helped elect to the White House?

“I said, ‘Why in the hell would we want to do that? It’s boring as hell!’” Charlie Black, Stone and Manafort’s partner, recalled in a recent interview with The Washington Post. “Paul said it wasn’t at all boring.”

Manafort had another thing to add: “It paid well.”

The young Republicans had ushered in a new era of Washington deal-making, one that is now a staple of how favors are traded in Albany too—unbeknownst to many of the progressive voters who hope to dramatically remake the state government. The Stone and Manafort model was pretty simple, though practically unheard of, in 1980: Work for candidates, get them into office, and then represent clients with business before the politicians.

What’s recognized as inherently corrupt when carried about by future Donald Trump acolytes facing legal scrutiny is generally accepted as the price of doing business in New York.

Many of the major political consulting firms in New York—including the Parkside Group, the consultant for the newly emboldened state Senate Democrats, the MirRam Group, an influential firm with close ties to Attorney General-elect Letitia James and Congressman Adriano Espaillat, and the Advance Group, perhaps best known for spearheading a successful and controversial independent expenditure to help sink Christine Quinn’s mayoral bid in 2013—also register to lobby for a wide variety of clients. Their clients know they can buy a special kind of access, because it’s not every lobbyist who has formed a close bond with an elected official over an intense campaign season—and who helped the person they’re lobbying win.

These sorts of relationships set up conflicts of interest that undercut our democracy but remain perfectly legal. Parkside, for example, lobbied for a major development at Willets Point in Queens, trading on relationships the firm formed with Queens elected officials it largely helped elect. (A founding partner of the firm, Evan Stavisky, is a Queens Democratic district leader and a close friend of outgoing Congressman Joe Crowley, who remains the chairman of the Queens Democratic Party.)

In defense of Parkside, MirRam, and the Advance Group, they at least register to lobby. A phenomenon of recent vintage, too common in New York and elsewhere, is the political consultant who advises lucrative clients on “strategy” and helps set up meetings with elected officials while skirting the formal definition of lobbying in New York

A notorious practitioner is BerlinRosen, a consulting firm that does not register to lobby elected officials. The consultant of choice for Bill de Blasio’s successful campaigns for mayor, BerlinRosen is a driving force behind the permanent government we see today. They represent the city’s most powerful developers, the kinds of players who prize access to City Hall above all else: Two Trees, Forest City Ratner and SL Green.

Two Trees, which made its fortune redeveloping the Brooklyn neighborhood of Dumbo, has strongly backed de Blasio’s proposal for a Brooklyn-to-Queens streetcar, regularly interacting with City Hall and funding an advocacy group, Friends of the Brooklyn Queens Connector. Despite widespread criticism of the project, de Blasio has not backed away from the so-called BQX.

Since de Blasio was first elected in 2013, BerlinRosen earned more than $10 million consulting for campaigns across New York state. Their consulting revenue for non-candidates is not public, though their influence is only growing.

There is some good news: More disclosure for firms like BerlinRosen may be required come January, if a lawsuit doesn’t block new statewide regulations set to go into effect.

The Joint Commission on Public Ethics, New York’s ethics and lobbying watchdog entity, wrote the regulations defining lobbyists as a class of political consultants that has wielded influence with elected officials through close relationships—without the consultants themselves actually engaging in traditional acts of lobbying.

Lobbyists would also have to disclose the name of the elected officials they lobby, instead of using generic terms like “Assembly” or “Senate.”

All of these regulations would do the state a great service. The next step is for the Senate and Assembly to pick up a piece of legislation that was carried by one of the recently defeated former members of the Independent Democratic Conference, David Valesky of Syracuse.

Valesky, along with his old IDC colleagues, had backed a bill to outright ban consultants from lobbying in New York. Though the IDC’s intentions were, in part, politically motivated—their bill would have kneecapped Parkside, who consulted for their rivals, the Senate Democrats—their legislation could have been transformational.

Passing the Republican and IDC-controlled Senate, the bill died in the Democrat-controlled Assembly. In 2019, Democrats in the Senate must build a true firewall between consulting and lobbying and convince their Assembly colleagues to do the same. Otherwise, calls for reform will ring hollow in a state capital that has, sadly, known far too little change.

Ross Barkan is a writer, journalist, and former State Senate candidate. This piece first appeared in City & State, a politics and policy journal with which The Public shares content. Follow Barkan on Twitter: @RossBarkan.