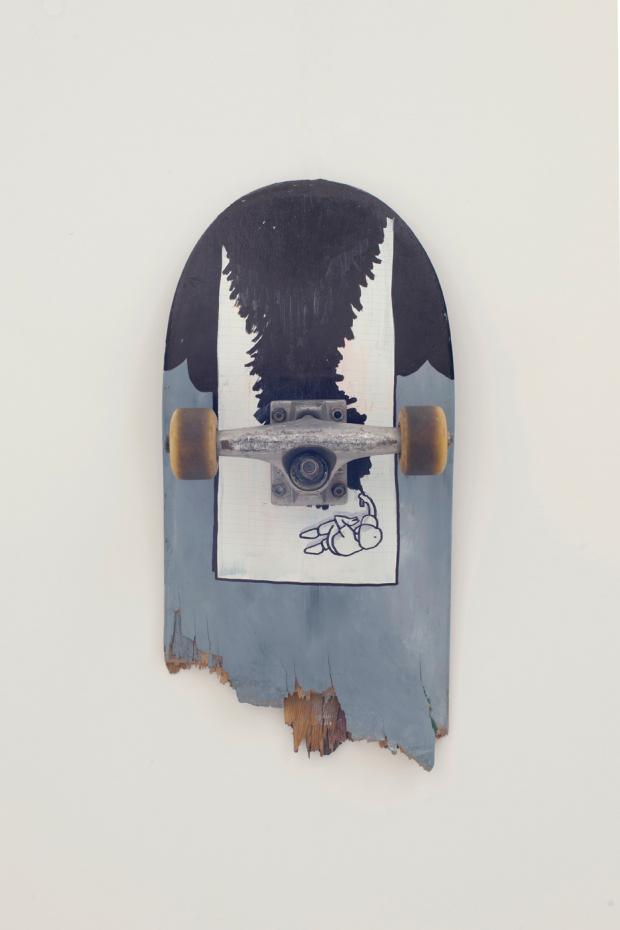 Art and skateboarding share the limelight in artist and inveterate boarder Tom Holt’s current show at Western New York Book Arts Center. A couple of drawings on paper, but most of the art is on skateboards or skateboarding ancillary items. Such as the one abstract example, a square of black grip tape—a kind of fine grade sandpaper material applied to the top of the board to make it easier for sneaker soles to grab onto—with a subtle wear pattern, the result of exactly one hundred “kick flips,” a standard maneuver in which boarder and board rise off the ground—the boarder separating from the board—and the board turns over completely—360 degrees—along its long axis, before boarder and board re-connect and return to earth. To perform the maneuver, the boarder simultaneously lifts his back foot and slides his front foot sideways and forward. The pattern on the exhibited grip tape is from the front foot movement.

The art on skateboards ranges from commercial work Holt has done for a skateboard manufacturer—decorating a board produced by the Estilo company with their name in a kind of Keep on Truckin’ script—to a skateboard version of an artist’s sketchbook, a board covered with a hodge-podge of drawing and writing in a range of styles from cartoon comic to art school serious, and subject matter with no noticeable common theme except possibly pizza. One of the more enigmatic images is a pseudo-Sebastian, shirtless, with a chest full of arrows, and more on the way. Another image looks like the artist at work sketching away at a table in a restaurant, maybe in a notebook, maybe directly on the table.

Another drawing on a skateboard amounts to a whimsical verbal/visual pun. The piece is called Coffee Break. The front end of a skateboard—personified, that is, with a face and hands and arms—planted upright in the ground, so that it readily transmogrifies into a marble slab tombstone—is enjoying a coffee and a cigarette.

On other board works, actual use scrapes and grooves and gouges—parallel to the board long axis, on the metal joins between the wheel pairs, or across the bottom of the board, diagonally to the long axis—the results of temporarily off-wheel advanced athleticism maneuvers such as “grinding” along curbstone or bench seat or other such substructure edges, or “sliding” on a stairs handrail or the like following a substantial “ollie” skater and board leap onto the handrail—translate conceptually into scrapes and bruises and occasional broken bones for the skater. (Holt said he has broken several bones skateboarding, amid countless lesser injuries.)

A drawing on paper depicts the skater artist’s minimal sufficiency ideal world. A detached—floating in mid air—small city block comprising a little house—skateboarders have to come in off the street sometime—a “half-pipe” skating practice and performance structure in the back yard, a building representing the Pine Apple Company, an artists’ collective and artworks emporium Holt is a part of on Allen Street, and a pizza parlor.

“This exhibition is a love letter to skateboarding” Holt says in his artist’s statement on the show. And goes on to describe the yin and yang relationship for him of his dual passions of boarding and drawing. Drawing for him is a means of escape from the world, he says, whereas skateboarding puts him out on the streets, “interacting with my board and the world around me.” He even sees a connection between the two art forms in the way the skateboard traverse is like a drawn line on the world that the boarder artist controls, straight or curved or zig-zag, whatever.

Not really part of the show but included for good measure and background information is a photo from the artist’s personal archive showing him at his SUNY at New Paltz graduation exhibition, in mid-air at the top of a ramp set up in the gallery, executing an ollie for an admiring audience. No ramp in the WNYBAC gallery, but Holt said he did ride his skateboard to the show opening. Only appropriate.

The exhibit is called Roll the Bones. Obscure reference or cluster of references, but surely something to do with the aleatory aspect of skateboarding in general, and the bones at risk. The exhibit continues through December 15.