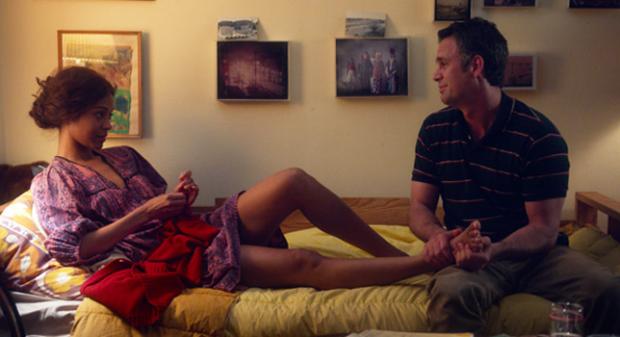 To begin with, St. Vincent, the movie he was at the Toronto International Film Festival to promote, is nothing to be terribly proud of. Murray gives it his all, which is always worth seeing, but everything about the production seems to have been designed with one goal in mind: to snag its star an Academy Award.

To give him the benefit of the doubt, maybe it didn’t look quite so bad on paper. Maybe he put too much faith in essentially untested writer-director Theodore Melfi. Maybe he thought that his co-stars—Melissa McCarthy, Naomi Watts, Chris O’Dowd, Terrence Howard—would help cut the sugar content of a story about a curmudgeon warmed by the friendship of a lonely young boy.

But St. Vincent is being distributed by Weinstein Films, and if Harvey Weinstein knows about anything, it’s chasing Oscars. And so this year TIFF, which has become increasingly starstruck over the years, turned its opening day into “Bill Murray Day.” The enormous Princess of Wales Theater hosted free screenings of three of Murray’s most commercially successful films, Stripes, Groundhog Day and Ghostbusters. (Two of those were directed by Ivan Reitman, the Toronto son who donated the land on which the Bell Lightbox, TIFF headquarters and ground zero of festival fever, now sits.) Patrons who came dressed up as their favorite Bill Murray character stood a better chance of winning a free ticket to that night’s premiere of St. Vincent.

Murray showed up to do a Q&A after one of the films, but you have to wonder if the notoriously publicity-shunning actor was comfortable with all this hoopla. It may have backfired on Weinstein Inc.: a few days later Murray told Variety that he has no plans to campaign for an Oscar. “I’m not that way,” he said. “If you want an award so much, it’s like a virus. It’s an illness.” Maybe “Bill Murray Day” served to inoculate him.

I’ve been covering TIFF since 1988, when it was still called the “Festival of Festivals” and aimed to do no more than present the best of other film festivals for their Canadian premieres. It has grown over the years into two concurrent festivals: one in which Hollywood launches its post-summer awards-driven season, and one in which TIFF programmers who have spent the preceding year scouring the globe for the best new films present what they’ve found.

The incessant Oscar baiting hasn’t helped the quality of the festival any, bringing in a lot of films that really shouldn’t be there. Wasting screen space this year were This is Where I Leave You, The Equalizer, and The Judge, which somehow got the opening night slot that historically has been used to feature a Canadian film. I guess the programmers really didn’t like the new David Cronenberg movie. (Though at least they booked it, unlike the latest by another former TIFF favorite, Atom Egoyan, whose new The Captive was mercilessly attacked at Cannes. Making the best of a bad situation, the film’s Canadian distributor booked it to open in Toronto theaters the week of the festival and made Egoyan available for interviews.)

But aside from raising the noise level at what is already a pretty noisy ten days—adding a bit more chaff to be separated from the wheat—Oscar hype hasn’t really hurt TIFF either. There are just as many first-rate films as ever, and too little time to get to them all. I saw roughly 30 films this year, as always trying to avoid the high-profile ones that are certain to play in Buffalo. Very little of what I saw sent me out of the theater wishing I’d made another choice, a constant worry. (At any given point in time, there are as many as 29 movies to choose from, not counting off-site screenings set up by publicists. TIFF can be the definition of the phrase “too much of a good thing.”)

Among the films that sent me away wanting to evangelize about them:

Infinitely Polar Bear—The title is a play on bipolar disorder, from which writer-director Maya Forbes’s father suffered. Her autobiographical film provides the role of a lifetime for Mark Ruffalo as the manic-depressive dad, forced to care for his two young daughters in Boston while their mother (Zoe Saldana) races through an MBA at Columbia. Forbes finds the right balance between darkness and humor in telling a difficult story, and Ruffalo gives one of the most appealing performances I’ve seen from an actor in recent years. If he’s not being promoted for an Oscar nomination, it can only be because the same studio (Sony Classics) thinks he has a shot at Best Supporting Actor for Foxcatcher, but this is the better film.

The Yes Men Are Revolting—If you’ve seen the previous Yes Men documentaries, I need only tell you that this is up to par, maybe their best yet. Socially conscious pranksters Mike Bonnano (a former UB student and Squeaky Wheel intern) and Andy Bichlbaum are as hilarious as ever as they pass themselves off as representatives of big corporations to bring attention to underreported issues that are not remotely funny. (Video footage of Canadian forests after the tar sands oil extractors have finished with them is an image you won’t soon forget.) This is the first Yes Men movie to delve into their personal lives, to make points that are wholly appropriate. As yet it doesn’t have a distributor.

Whiplash and Boychoir—Two very different films about student musicians and their imposing teachers. Boychoir stars Dustin Hoffman as the headmaster at the American Boychoir School, tasked with an unruly young student with an angelic voice. Directed by François Girard, whose knows something about musical drama (The Red Violin, Thirty Two Short Films About Glenn Gould), it’s the more conventional of the two, but irresistible nonetheless. Whiplash is a much darker story of a driven student drummer (Miles Teller) at a Manhattan jazz conservatory who comes up against an even more driven teacher (J. K. Simmons). Guaranteed to be hated by Tiger Moms for suggesting that achieving your dreams may not be worth what it takes, it’s now playing at the Amherst Theater.

It Follows—From the “Midnight Madness” sidebar, a horror film with an original monster, a slow-moving but implacable entity that takes different human forms and can only be seen by its current target. You can pass it on to someone else by having sex with them, but if it kills them it will then come back after you. Set in Blue Velvet-ish town, the film is deliberately paced and creepily staged. Like too many horror films it has an unsatisfactory resolution (perhaps as an opening for a sequel), but it got under my skin, and that doesn’t happen very often.

The Humbling and Manglehorn —No one would blame you if you’d given up on Al Pacino (however much he got paid to make fun of himself in Jack and Jill, it wasn’t enough), but with these two films he shows he’s not out of the game yet. (Robert De Niro, take note.) Based on the Philip Roth novel, The Humbling shifts in and out of fantasy and reality in observing an aging actor uncertain if he has lost his gift. Shot on a minimal budget by Barry Levinson from a script by Buck Henry, all doing their best work in years. Pacino plays another age-appropriate character in David Gordon Green’s Manglehorn, a locksmith shut off from the world and obsessed with a failed romance from his youth. Both films have other strengths, but they’re worth seeing for Pacino alone.

To this list I would like to add A Pigeon Sat on a Branch Reflecting on Existence, the third part of Swedish filmmaker Roy Andersson’s trilogy about human absurdity (the others are Stories from the Second Floor and You the Living), but I cannot in good conscience due to a scene that appears to show a laboratory animal being tortured. I understand the point it’s making, and I hope to learn at some point that the scene was faked, but it looked all too real to me.

The also-rans, movies I recommend you see but which I wouldn’t necessarily need or want to sit through a second time: The Face of an Angel, in which the brilliant British filmmaker Michael Winterbottom uses the Amanda Knox murder case in Italy as a framework for an essay on the limits of journalistic narrative that are intriguing but ultimately frustrating, especially for viewers drawn by the tabloid nature of the story; Ned Rifle, the first Hal Hartley film in far too many years, finishing a trilogy begun with Henry Fool and Fay Grim; Alan Rickman’s A Little Chaos, a lavish period piece about what would seem to be a most uncinematic subject, the construction of King Louis XIV’s garden at Versailles; The Grump, a Finnish comedy about a set-in-his-ways old farmer forced to share the modern apartment of his daughter-in-law; and Good Kill, starring Ethan Hawke as an Air Force officer who stages drone strikes in the middle east from a base in Arizona.

Among the disappointments: Cut Bank, a blackly comic crime story that wants to be in the Coen Brothers mold but whose tired twists mostly just waste a great cast (John Malkovich, Billy Bob Thornton, Bruce Dern, Michael Stuhlbarg, Oliver Platt); Francois Ozon’s The New Girlfriend, about the coming out of a cross-dressing widower (Romain Duris); Revenge of the Green Dragon, about Chinese gangsters in Queens, presented by Martin Scorsese and directed by the Hong Kong filmmakers whose Infernal Affairs Scorsese adapted as The Departed, which is a lot of buildup for a clichéd, violent movie; Human Highway, Neil Young’s new cut of his goofy 1982 comedy (co-directed with Dean Stockwell) that makes the mistake of replacing the original’s best sequence—Young and Devo jamming on “Hey Hey My My”—with the bland “Going Back”; and Abel Ferrara’s Pasolini, which gives you the impression that what the infamous Italian filmmaker really died from was boredom.

And at the bottom of the list (aside from Kevin Smith’s awful Tusk, which played there but I didn’t see until later) was The Cobbler, a fantasy starring Adam Sandler as a lower Manhattan shoe repair guy who discovers he can magically become other people by wearing their shoes. I gave this a chance only because it was directed and co-written by Thomas McCarthy (The Station Agent). But while it may have been better than the average Sandler comedy, by any other standard it’s a mess, doing nothing with its admittedly forced premise on the way to a preposterous finale.