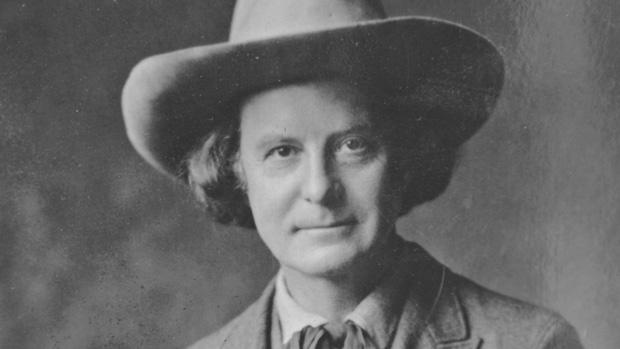 Elbert Hubbard, the wizard of East Aurora or Christmas miracle-worker? Or both?
by
Mason Winfield
/ Dec. 6, 2016 6pm EST

Around 1900 a guest of East Aurora’s Roycroft Inn spotted an old employee weeping at her job. When asked what sort of tragedy had brought her to tears, she replied that they were tears of joy. By vouching for her son’s character and guaranteeing him a job, Roycroft founder Elbert Hubbard (1856-1915) had gotten him out of prison early to spend the holidays with his family. He had pulled one of his Christmas-season strings. This is the second in our series of seasonal Roycroft Campus ghost stories.

Born in Buffalo of first-generation German-Americans, Lewis Valentine Fuchs (1897-1957) was one of those unusual people who was a veteran of both the World Wars. By the 1930s Fuchs was living in East Aurora. By the early 1940s, he was working for the Erie County Trust Company. Shortly after the end of the Second World War, his bank gained ownership of the Roycroft Inn in a foreclosure proceeding, and  “Louie” Fuchs retired to become an innkeeper. Many people thought he was taking over a white elephant.

The inn had had some ill fortune in the decades since founder Elbert Hubbard’s disappearance aboard the Lusitania. Hubbard had been known for his dislike of alcoholism, and his inn had never sold alcohol during his span at Roycroft (1895-1915). People in the village were starting to gossip that Hubbard had placed a curse over the fortunes of any future proprietors of the inn who sold beer, wine, or spirits. Most restaurateurs will tell you that they would be cursed if they didn’t sell beer, wine, or spirits.

Even if you believe in hexes, evidence suggests that the legend was unfair. A number of owners have made a go of the inn with thriving pubs. The Turgeon brothers enterprise owned the inn in the 1970s, and their thumping basement disco Ali Baba’s was a Southtowns legend. The inn does very well today, and it vends its share of spirits. Still, I am told that at the time the inn came to Fuchs, it was considered a dummy prize. Apparently someone at his bank who may not have liked him had the idea to foist it off on the near-to-retirement Fuchs in place of a sizable retirement package. If joke it was, it was on somebody else.

Fuchs made the inn a great success. Every day at happy hour the bar was stacked five-deep.  The restaurant was packed on weekends. The Roycroft Inn was as much the centerpiece for the town’s recreation as it had ever been for its culture.

Fuchs was known not only for his savvy as an innkeeper, but for his acts of kindness, especially around Christmas. Every one of the years he owned the inn he called a meeting of his employees and asked for the names and addresses of the worthy needy in the Town of Aurora. He had baskets made up of gifts, food, and clothing, and directed his employees to deliver them on Christmas Eve. “Don’t you ever tell them where it came from,” he told his drivers.

Fuchs’s charity is a direct echo of “The Christmas Miracle,” one of the grand gestures for which Elbert Hubbard was known in his two decades of stewardship of the Roycroft enterprise.

Now, Elbert Hubbard is East Aurora’s most celebrated late resident. It’s no surprise that when a villager spots an apparition and gives it a name, his is the one most often tacked onto it. Hubbard’s ghost is reported all over the town and not just on the Roycroft Campus. I haven’t heard about him much in the last two decades, so maybe he’s through coming back.

Other legends about Hubbard were even wilder than the chance that his form might come back as an apparition. A little cult of believers could be found in the 1980s to attest that the living Hubbard had been a wizard who had orchestrated his disappearance off the Lusitania so as to spring straight into the world-between-worlds like an ascended master. For such a character, a simple curse ought to be kids’ stuff, and a few post-life reappearances to be expected.

The Harry Potter-style stuff probably started with Hubbard’s own interests. He was likely to have been a Rosicrucian, and he probably kicked the tires with Freemasonry, Theosophy, parapsychology, and Spiritualism. That’s a long way from the effective practice of magic, but the average American lumps all forms of alternative spirituality in with the sinister.

At least in the village folklore, Hubbard comes back as a confessor more than a haunter. He makes an exceptionally intelligent ghost. In some recountings he’s that oddest combination of an apparition and a spirit-guide who was said to join his confidants on the streets on their evening walks. He came to another disciple as a reflection in the broad mirror of the former bar at the inn, delivering side-by-side counsel that no others could hear or see. I was also told that Hubbard appeared now and again in quiet moments in the broad 1907 photograph of the inn that was once in place of the former bar mirror. His tiny two-dimensional apparition came out the door of the inn like a figure on a TV screen, took a seat on the steps, and joined his living witness thus in dialogue.

The most developed of these tales are of course hard to swallow. Many people spot the occasional faint, flickering image we call a ghost. Claiming to have held a series of dialogues with one is a very different thing. Fuchs, according to testimony, had his mind made up.

One of my late interview subjects, a former Roycroft employee, had congratulated Fuchs on his success at the inn. My subject asked him if he hadn’t been worried about the legendary teetotaler’s curse. Fuchs said he didn’t believe in a curse. “No?” said his companion.

“Hubbard didn’t mean it,” Fuchs was said to have said with a Saint Nick twinkle in the eye. “He told me so.” He went on to say that the two consulted whenever Fuchs had a pivotal decision to make about the fortunes of the inn. It would figure. Maybe that was how he got the pass on the curse, and the idea for his own Christmas Miracle.