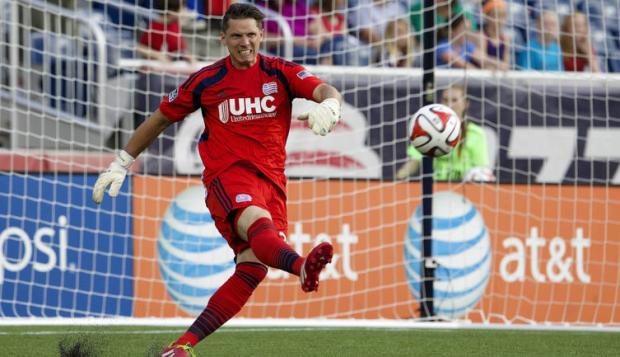 Landon Donovan, the man widely considered to be the greatest player in United States soccer history, will take the field on Sunday for the final game of an illustrious career.

And the man in charge of keeping Landon Donovan from going out on top with an MLS Cup final win? He’s from Tonawanda.

Bobby Shuttleworth takes the stage on Sunday as villain, underdog, and starting goalkeeper for the New England Revolution, the Major League Soccer club looking to win its first ever MLS Cup by knocking off Donovan’s heavily favored Los Angeles Galaxy.

No big deal, though: The 27-year-old Nichols graduate and University at Buffalo product has made a habit of stymying international superstars this year. That includes thwarting one of the world’s all-time soccer heroes, Thierry Henry, with a highlight-reel save at the end of last weekend’s Eastern Conference semifinal.

“I grew up watching those guys, and watched them in college and never thought that I would be at this stage in my career of being able to play against them,” Shuttleworth said of Henry and Donovan. “I’m very honored and extremely excited.”

Considering most of the average soccer fan’s excitement comes from trying to stop Henry or Donovan on a video game, we’ll call that an understatement.

But Shuttleworth’s grounded. As much as it’d be easy to gloss the story as a kid going from an elite upper-class prep school to a full-ride at a solid college to a standout role on a professional sports team, this just isn’t the case.

For example, Shuttleworth didn’t start off at UB. After an All-WNY career at Nichols, he began his collegiate career at Loyola Maryland, where things didn’t work out and he headed back home, where he was a proverbial brick wall for legendary Buffalo coach John Astudillo, allowing less than a goal per/ game.

But he’d have to skip his senior year for a very good UB team, one full of friends on a campus with his longtime girlfriend (now wife) Geenamarie Ruggiero.

He went for it.

“It wasn’t easy but even if it hadn’t worked out I would’ve always regretted not taking a chance on an opportunity that was in front of me,” Shuttleworth said. “I would look back with regrets if I didn’t work my tail off or didn’t take those chances.

Fortunately he had a supportive family. His future father-in-law was the head women’s soccer coach at Hilbert for more than a decade, and Geenamarie had the experience of a Division I athlete.

“She kinda gets a bit more nervous sometimes than I do,” Shuttleworth said. “She not only understands me in a personal relationship, but where I am a lot of times in soccer. It’s our living, so it can change the mood you’re going through. She totally understands that cause she played the game and she’s gone through those things.”

After four years with minimal playing time behind MLS legend Matt Reis—now the goalkeeping coach for LA—Shuttleworth broke through in 2013. With Reis injured and the Revolution searching for answers, the Buffalo native didn’t allow a goal for over two months, the 395 minutes of shutout soccer setting a club record.

When Reis retired after the 2013 season, Shuttleworth saw his chance and seized the starting goalkeeper’s role in training camp. He recorded the fourth-best goals against average of any player who played 30 or more games this season. And his advanced stats say he’s a top 7 goalkeeper for defending, just below United States national team third-choice keeper Nick Rimando.

Which raises an issue here that’s been posited around US fan circles: Could this kid from Buffalo be called into Jurgen Klinsmann’s training camp this January?

“It’s a bit of an odd one for me because obviously I’d be so honored and I’m honored to even have people say that kind of thing,” Shuttleworth said. “But it’s not something I really concern myself with. My main focus has to be on my team and how I can help them.”

Which bring us to Sunday. Shuttleworth has dealt with unprecedented media interest, and helping track down travel and accommodations for family and friends heading to Los Angeles to witness the hopeful upset.

Six years after foregoing his final year of eligibility at the University at Buffalo, Shuttleworth stands between the sticks with a chance at history. Not only for his club and his family, but Shuttleworth recognizes a soccer community back home is going to have his back come Sunday.

“I’m very proud to be from Buffalo,” he said. “It’s a big part of who I am and who I continue to be. If anybody from Buffalo watches me play and feels like they’re a part of this, I’m more than proud to represent them.”