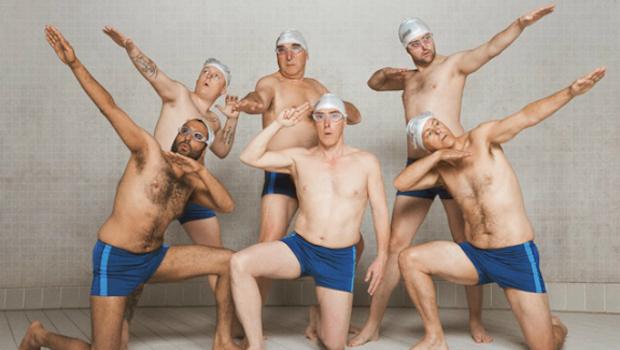 It’s all well and good to decry the lack of originality in movies, and people have been doing that probably since the premiere of the world’s second movie, whatever that may have been. But there’s something to be said for the safe and familiar, especially in the wintertime when you might be looking for nothing more for your ticket dollar than some easy jokes in a warm room; the kind of movie where you won’t miss a lot if you doze off for a few minutes.

And thus Swimming With Men, which I might describe as The Full Monty with more clothing except that there’s probably more male epidermis on display here than there was in that 1997 hit about amateur strippers. That’s because this octet of middle-aged blokes spends most of the film in bathing suits, practicing the art of synchronized swimming.

Our entré into their ranks is Eric, a senior accountant who has reached the top of his profession, lives in a lovely house with his family, and is bored to tears with his life. He is played by Rob Brydon, a British TV star known in the US as Steve Coogan’s dining companion in the three The Trip movies. Stripped of the chance to imitate Al Pacino or Michael Caine, Brydon plays it straight to the point where you wonder if he isn’t headed for suicide after he engineers a breakup with his wife (Jane Horrocks, whom you may remember as Bubble on Absolutely Fabulous). Instead he is giving a reason to live when he uses his skill with numbers to repair the sloppy structure of the synchronized swimmers at his gym.

I’m sure there are places where synchronized swimming is taken seriously and not regarded as something to giggle about. But those places are probably all high schools, and the swimmers are not middle-aged men. (It certainly doesn’t help that most of you reading this will by now have recalled the old Saturday Night Live short film directed by Christopher Guest featuring Martin Short and Harry Shearer as synchronized swimmers.)

As directed by Oliver Parker, Swimming with Men is a low-key affair, never going too far beneath the surface of its characters’ traumas or making too much fun of their sport, the pursuit of which takes them to the world championship in Milan, Italy. That this finale doesn’t display more than a touch of Busby Berkeley-esque invention is a disappointment, true. But the film manages to send you off smiling after an endearing post script set on dry land, which I will not ruin for you. Opens Friday at the North Park Theater.

It goes without saying that opera buffs will want to see Maria by Callas, a new documentary about the woman who was most likely the most famous opera singer of the last century. Compiled by director Tom Volf, based on his 2016 book of the same name, the film is comprised entirely of quotes from letter she wrote (read by Joyce DiDonato) and interviews she gave mixed with footage of her on and off stage. This includes a handful of performances of full arias, unlike the usual practice for documentaries about performers that limit themselves to snippets of their work.

If you’re not already a fan, though, you won’t find much here to draw you in. Volf assumes that you already have a grounding in La Diva; it was well into the film before I realized that the middle-aged man who showed up in so many of her public appearances was in fact her husband. (When he is referred to by as Battista, I wondered when in the 1950s she had performed in Cuba.) You’re also expected to understand that her relationship with Aristotle Onassis was not as platonic as she is heard claiming. And if you’re not already a fan of opera, well, that’s all there was to her life, at least as seen here.

You would expect a film starring two Oscar winners (Colin Firth and Rachel Weisz) to get a bit more attention than The Mercy, which is sneaking into American theaters nearly a year after its British premiere. That’s probably because American audiences are likely to have a different reaction to this drama based on the true story of Donald Crowhurst, the British amateur sailor who in 1969 tried to sail around the globe by himself. We hear a premise like that and expect a certain kind of movie, unlike British viewers who remember the actual story and it’s downbeat conclusion. If you’re tempted to see this well-acted but dour drama, you might best be advised to read up on Crowhurst first: you still may not like it, but at least you’ll better be able to appreciate the kind of movie that director James Marsh (The Theory of Everything) has made.

I have not previously had a chance to weigh in on Catcher in the Rye with Diamonds, Greg Sterlace’s imagining of the three days Mark David Chapman spent in Manhattan before he killed John Lennon. It will be screened this Saturday night at the Screening Room. No admission will be charged, and I won’t belabor the reason for that, which is the same reason why you won’t have many other chances to see the film: There are drawbacks to ignoring copyright law. You have to admire the sheer chutzpah of making a movie that will definitionally never be able to turn a profit, or even to return a single cent of its costs. But aside from that, it’s a smart piece of work, ensuring that you’ll never be able to think of Holden Caulfield again without hearing a soundtrack by John Lennon. I have to admit that I have never been a fan of the book or of its whiny protagonist, but the script by Sterlace and his partner Paula Wachowiak, and the portrayal of both Caulfield and Chapman by John F. Kennedy, makes me look at the character in a way I never did before. Arrive early so you won’t have to stand!