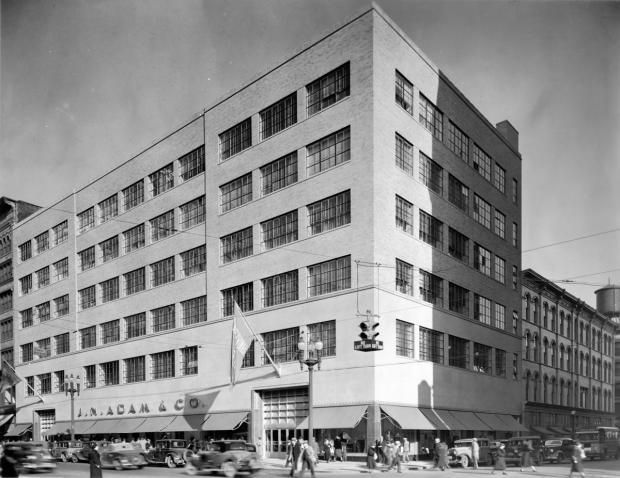 Photo courtesy of the Buffalo History Museum.
by
The Public Staff
/ Dec. 4, 2018 6pm EST
“The store of today that is designed in the tempo of tomorrow. A new store—and a modern spirit of architectural design—that reflects the vigorous character of American life and industry as we know it today. A store whose beauty of line, simplicity of color, and freedom from superficial details of design will keep it a young store when another half century has rolled away. Today, in Buffalo, the new J.N. Adam & Co. store is an outpost on the architectural frontiers of the city. It reflects a style in modern architectural design that will be commonplace within a generation. It marks a new era.”
The J. N. Adam & Company department store, expanded and modernized, reopened with fanfare in 1935. The above copy from a 1935 newspaper ad captures a local spirit, even at the height of the Depression, of civic optimism. The store expansion was designed by Starrett & van Vleck, America’s premier department store architects in the early 20th century. Reminiscent of Erich Mendelsohn’s department stores in Stuttgart (1928) and Chemnitz (1929), it was Buffalo’s first hint of the emerging International Style. In 1960, the building became the home of AM&A’s, perhaps  Buffalo’s most beloved department store. The building went dark in 1998, evaded an ECIDA demolition and redevelopment attempt in 2005, and was purchased in 2015 with plans for a mixed-use rehabilitation.