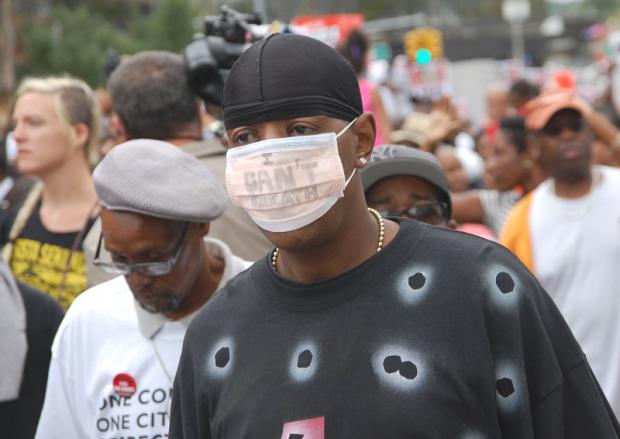 Here we go again. Hot on the heels of widespread public outrage over a grand jury’s failure to indict a policeman for shooting Michael Brown to death in Ferguson, MO, we have another such failure in Staten Island regarding the death of Eric Garner. Only this case seems even more blatantly unjust than the last.

Both cases seem to involve policemen violently overreacting when black men showed insufficient deference to their authority. Contrast this with numerous examples of white don’t-tread-on-me types marching around in public with loaded assault rifles and being either tolerated or patiently talked down by police. This is not just about race, though, and we should not get the notion that poor white people aren’t similarly at the mercy of the police. These cases are about police impunity, a concept that should trouble all of us. And what’s so disappointing about the reactionary conservative response to all of this is how willing they are to embrace a lethal brand of authoritarianism when it comes to black people committing petty crimes (or just holding BB guns) while supporting the anti-government diatribes of “patriots” like delinquent rancher Cliven Bundy as he and his band of confused rebels actually pointed guns at the Feds and came to no harm.

Meanwhile, the grand jury proceedings in Ferguson—protests over which are overlapping with protests over the Garner killing—have been shown to be nothing short of farcical. The transcript reveals jaw-dropping behavior on the part of the prosecutors, who act more like Darren Wilson’s defense attorneys and take pains to sabotage their own case. They interrogate Brown’s friend and witness Dorian Johnson, doing their level best to poke holes in his narrative and repeatedly disparage Brown’s character. They mention Brown’s marijuana use 44 times. 44 times. Officer Wilson, however, is simply allowed to tell his story with no real cross-examination at all. Throughout the proceedings, prosecutors seem to be prosecuting Brown and defending Wilson. The medical examiner comes off as inconceivably incompetent at best, giving some of the world’s worst excuses for utterly failing to do his job.

Perhaps worst of all, Assistant District Attorney Kathi Alizadeh instructed the jury based on a law that had been invalidated by the U.S. Supreme Court before she had even begun practicing law. The statute essentially states that police can shoot a suspect simply for fleeing, and would have appeared to provide Wilson with the legal cover he needed, were it not for the 1985 Tennessee v. Garner decision that wisely nixed the notion that cops can shoot a guy for running away. So this ADA gives the grand jury the impression that this 30-years obsolete law is still in effect, and then, three months later, gives them new instructions without explaining why. You tell me, does that sound like a prosecutor who wants to succeed in bringing charges?

Unsurprisingly, the grand jury regarding Eric Garner’s death is also hinky as hell. Again we have the defendant, officer Daniel Pantaleo, giving lengthy testimony in his own defense, some of which is in clear conflict with video footage. For instance, Pantaleo claims he didn’t use a choke hold (a move banned by the NYPD) and tried to disengage as quickly as he could when Garner stated he couldn’t breathe. These are just falsehoods, as anyone who has seen the video footage can attest. He also makes the somewhat despicable assertion that Garner’s ability to speak meant that he could indeed breathe, as if the man were lying. I think we can forgive the deceased for not having the presence of mind at the time to articulate, more correctly, that he was having difficulty breathing. And, you know… dying on the spot would seem to support the veracity of Garner’s complaints.

To give you an idea of how unusual it is for defendants to testify at grand juries, especially in such an unfettered way, even conservative icon and Supreme Court Justice Antonin Scalia wrote, in the majority opinion on United States v. Williams in 1992, “…neither in this country nor in England has the suspect under investigation by the grand jury ever been thought to have a right to testify or to have exculpatory evidence presented.”

But things are different when cops are involved. A New York Times story from Wednesday shows just how comfortable those who benefit from it are with that obviously exceptional treatment:

“In the majority of cases, defendants do not testify in front of a grand jury,” said James J. Culleton, who has represented police officers in high-profile police shootings, including those of Amadou Diallo and Sean Bell.

But police cases are different, he said.

“The justification defense — put it in front of the grand jury,” he said. “I believe the grand jury wants to hear what a police officer has to say. What happened? What was happening around him at the time?”

Well, gee, I bet the grand jury wants to hear all kinds of stuff that simply isn’t within its purview and is irrelevant to its purpose. The level of comfort with which it is acknowledged that police get special treatment in these cases is as alarming as it is predictable.

For some people, no exposure of legal shenanigans will sway them from the conviction that cops are always right, at least when it comes to big black guys. There is an all-too-large segment of the American populace that embraces the dangerously authoritarian sentiment that police officers should be shielded from the very laws they ostensibly uphold. And it seems clear now that prosecutors are abusing the grand jury process to do just that. The medical examiner’s office pronounced Garner’s death a homicide, the cause of death being “compression of neck (chokehold), compression of chest and prone positioning during physical restraint by police.” Any arguments that there wasn’t enough evidence to justify charges are easily refuted by the video we’ve all seen, which plainly shows excessive force and serves as another reminder that mandatory body cameras would prevent most of the abuses dominating the news cycle today. Opposing such a measure puts one squarely on the side of continued unaccountability for cops. It seems an obviously sensible policy, but I have a feeling conservative pundits will find a way to oppose it. Meanwhile, police found time to arrest the man who made the video on supposedly unrelated charges. And that grand jury had no trouble returning an indictment.

On Ferguson, those who sided with Officer Wilson had a bit more doubt to benefit from. They pointed to the video of Brown shoving a man earlier that day. They had the grand jury testimony of Wilson, which, again, reads just like he is being walked through his story by a defense attorney, and they treated it as gospel. Despite the fact that Brown’s body appears to have been much, much farther away than Wilson said, the idea that an accused murderer might doctor his story seems to have escaped them entirely.

But the Garner case gives them meager purchase. The video leaves no room for doubt. Garner attacks no one. He is being accosted for a piddling little violation that would normally offend conservatives as tax-crazy nanny state overreach. He is agitated, but not striking out. The situation calls for dialogue, not a gang-tackle. Calling his death, as some have, an “accident” defies the definition of that word. Continuing to choke someone who is saying “I can’t breathe” would seem to have an inevitable result.

Eight times, Garner said it, while that idiot squeezed his neck. Eight times. Run that through in your mind for a minute. Imagine keeping your arm around a man’s neck as he bleats out these last words:

And then he died. Nobody tried to save him. No charges? It’s not right; anyone can see that. I only wish I could say it’s hard to believe.