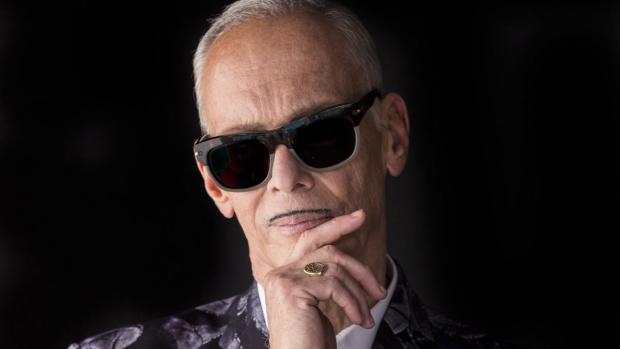 Initially, I was thrilled at the thought of speaking with John Waters. A film director seemingly without borders, especially 45 years ago before we were a nation desensitized, Waters made trashy behavior into science. And entertainment. Beginning with shoestring budgets and a cast of misfit regulars that went on to become cult celebrities (Divine, Mink Stole, Cookie Muller, Edith Massey), Waters took the off-color underbelly of humanity and gave it its close-up. While many looked away in horror, it only took about a decade before he started getting offered real budgets for his films and began using actual celebrities in them. The rest is well documented history. His mainstream breakthrough, Hairspray, got remade with John Travolta (in drag) and went on to become a hit on Broadway…from shock to chic.

So, yes, I was over the moon that this iconic figure from my youth—the man responsible for the scene in 1977’s Desperate Living during which Grizelda, a morbidly obese nurse, kills the husband of the woman in her care by sitting in him and smothering him*—would be granting me an interview. It’s the stuff that arts-journalism dreams are made of.

Without divulging too much, it was brought to my attention that the interview would need to pertain to Christmas and Christmas only. As someone that wanted to ask him about the trajectory of his career and why, for instance, he’s no longer producing original films, I was crushed. Christmas seemed like a very limited topic and, quite frankly, it all felt a little Grinch-y to me. But in the end, everyone’s favorite pencil-moustache’d master of disaster, now 72 years old, was charming and fun to chat with. I made Christmas lemonade.

Hey, John, how’s it going? Where are you today? How’s the weather?

I’m well, thanks. I’m in Baltimore. It’s a beautiful day, fells a little like fall…I never really notice the weather unless it stops me.

I did an interview years ago with Debbie Harry and she gave me a really hard time for asking her about the weather. I was just trying to break the ice, but she was having none of it and seemed genuinely annoyed that I’d asked. So, I wanted to ask you about Black Friday and the mob-scene mentality it inspires. What do you make of it?

I can’t imagine what the motivation is. It’s something I’ve never understood. Why would you want to get up at four in the morning and go down to the store for one thing on sale? Never understood it. I hate shopping malls any time of year, all year, every year. I’m not against retail, I do like retail stores, but it’s unfathomable to me why anyone would want to put themselves through all that. My nieces and nephews always go and they talk about it at Thanksgiving and I feel like they’re talking in a foreign language. All I can think is, “Why do you have fun doing that?” I guess if you had good drugs or something, or maybe if there was a prize, but it’s all bait-and-switch, it seems to me. Frankly, there’s nothing I want that much.

I keep waiting for a Black Friday death toll.

I guarantee you I won’t know the people that die. And maybe that sounds elitist, but no one I know would ever do that, and I’ve worked hard to get to the point in my life, after 50 years, that I’m not around people that would engage in that behavior.

What can you tell me about your collection of Christmas tree ornaments? I’ve been told it’s very eclectic.

I have lots of ones that fans have made me. People send me stuff, balls with my favorite writers on them, my favorite porn stars. I’ve always said you should take ugly pictures of your relatives and glue them onto ornaments…it’s a real ice-breaker. Don’t forget to include yourself! I have a Jeff Stryker Christmas ball and someone made me a MOVE Christmas ball—they’re a back-to-nature group in Philadelphia that I think got a really bad deal. I have Ivy Compton Burnett, writers like that. I don’t think that many people have James Purdy Christmas tree ornaments like I do.

Your annual Christmas card has become famous as well, and it’s hotly anticipated. Do you spend the entire year plotting it out? Or is there a bottomless vat of ideas you pull from?

I’ve just started signing this year’s cards. There are 2,000 of them. I’ve got about half done. The people that work for me start pressuring me about it in July because we have to get them made, I’ve got to sign them all, the envelopes and the labels—it’s a big production. Usually by late summer I’ve figured it out. I’ve got a folder of ideas, but I wouldn’t say there’s a surplus of them, so it’s still a fresh idea every year. It’s always there, another thing I’m always thinking of and working on.

Since your Christmas show is becoming tradition, I imagine you probably reuse some of the same material each year? Is it cathartic to retell the same stories?

I do a huge amount of revising each year; I practically rewrite the whole thing. I would say that the skeleton might be the same, but that’s really, like, a bare-bones framework, and there’s plenty of new stuff that gets worked in. All of the jokes and the things I talk about are very different from the year before. It changes significantly. I work on that in the summer as well. I’m not sure I understand what you mean by cathartic?

Well, like the story about the Christmas tree that fell on your grandmother, which you re-imagined for Female Trouble. I could identify with your childhood reaction to it, wondering if the gifts would be okay. I wondered if you still get a charge out of talking about it.

Well, you didn’t hear that this year, did you? Because it’s not in the show anymore. I do retire jokes.

But that’s what I’d call a shared story—it happens a lot. And it’s usually liquor or the dog. For me, it was exciting and I thought it perked up Christmas. I mean…it was drama! And she wasn’t hurt or anything, she thought it was funny later. I mean, she wasn’t pinned under it like we did it in Female Trouble…I exaggerated. But trees do fall over, and I think people should rig their trees to fall over almost like it’s a joke-shop Christmas. It’s a great gag. You know, the last person opening their presents and dinner is ready…just have the thing fall over. I also firmly believe that the day after Christmas you should take all your decorations down—it’s over, next. I do like it when all the dead Christmas trees are out in the alley trash. I had a friend, this kinda gearhead I used to know, he’d take me out and put a video camera on side of the car and we’d drive down the alleyway and light them all on fire while he filmed it. It was fun. It was also many years ago.

Your enthusiasm for Christmas makes me think there must have been a film idea about the holiday along the way somewhere. It’s made it into several of your films in passing, but was there ever a John Waters Christmas-specific film?

It got developed! We got a development deal to make the whole movie. It was called Fruitcake, and it was a children’s Christmas adventure, but it never got made. It was the last big development deal I got for something completely original. It went through a lot of different treatments and at one point we were even talking to some animation people.

Think it’ll ever get resurrected?

You never know what’s going to happen. My old movies have turned into many different projects—they come out again, get re-released, remade, restored. Everything is possible. I learned that a long time ago. Who knows, maybe we’ll get Hairspray in Space.

Sometimes I think Christmas should be eradicated. I’s become such an ugly parody of everything that’s wrong with our culture. But how could we get rid of it? Where would we event start?

Cockroaches, Keith Richards, and Christmas will be the last to go. Honestly, though, I think the best point of it is to see your family and have a meal together. I have a Christmas party every year, but it’s not a celeb party, it’s for my oldest friends in Baltimore, and most of them aren’t in show business. I think it’s important to go back home somewhere and be reminded of what you’ve come through—good or bad—and that you’re still alive. This year could be tough, though, because when people go home, this year in particular, it can be so politically divided. I feel as if this year I know a lot of people that are scared to go home, because you can’t talk about anything going on in the world, so you’re sitting around in silence opening the presents. I’ll talk in my show about how to deal with that. I have advice for everything that can go wrong at Christmas, because a lot of things can. And will.

*Grizelda doesn’t just smother him. Rather, she sits on him and grits her teeth, making a grunting noise as she shifts her weight from side to side, grinding down and eventually killing him. It’s extremely satisfying.