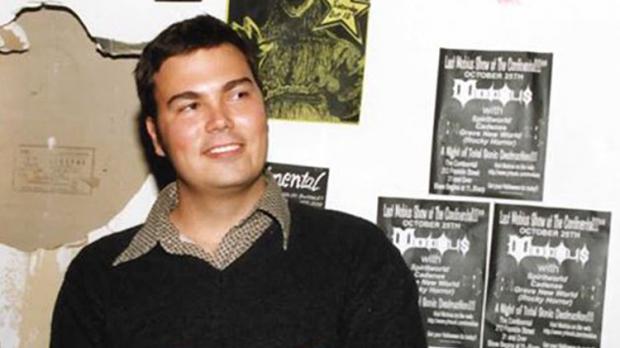 Last week Buffalo lost a cultural pioneer with the passing of Craig Reynolds. Here we reprint Reynolds’s seminal 1997 essay from the first issue of his zine, Basta!

Reflections on a Postmodern City

THE ARGUMENT: Buffalo provides a challenge, not a legacy; it taunts the uninspired until they flee to a city where legacy’s flow will carry them along, like New York, San Francisco or Seattle. Buffalo requires a substantial commitment, like that of a drowning man to his condition. In Buffalo, we wrestle with God, Job’s God, and the fact of being is enough.

I begin to understand this after asking my 2 friends visiting from Seattle how they like the Albright Knox Art Gallery, the first stop in my weekend tour of Buffalo’s monuments to greatness. Pointing at Andy Warhol’s 100 Cans, they ask, “how Buffalo get a Warhol?” making me realize: 1) my friends aren’t exactly Peggy Guggenheims, but that’s perfectly a–okay; and 2) even after enjoying firsthand some of the greatest paintings anywhere, the misconception that Buffalo couldn’t possibly be significant remains even still.

It is a Saturday morning late in the football season and the museum is relatively empty, so one guest poses the inevitable question, “where is everybody?”––but rather than waste energy answering it, we who are not somewhere else do what we always do when queries like that arise: lean forward as far as we can without stubbing our noses on cold marble or bronze or drooling all over the paintings we risque absurdity to love, muttering under our breaths: “my God …”

“NOT MUCH HAPPENING HERE!”

A few hours later, after a quick architectural tour beginning on the gallery’s rear steps and ending downtown, we wind up at the waterfront, where we enjoy the cacophony of winds whistling through the car’s window casings. Naturally, being downtown, there’s no-one around …

Except a pack of wild dogs …

Wrestling savagely beside an over–turned garbage can on the corner of Erie and Lakefront Boulevards.

I go absolutely nuts to myself realizing I live in a city where wild dogs roam the streets, where the only activity is the impossible action of postmodern comic strips and outlandish science-fiction fantasies. I explode with delight realizing just how primal things have become, how ugly, how real.

Society has no claim on Buffalo anymore. We’re alone and that’s happy. We’re all gonna die and that’s happy. The empty storefronts that line Main Street dot sentences that ceased being written in earnest decades ago (anybody who writes them still invites the cancer that threatens to devour America). Buffalo is a grand Dadaist joke played on the American dream. What to do now is anybody’s guess––

My friends and I drive off wildly into the tangled maze of industrial nothing and bliss. “Not much happening here!” I shout and take a robust pride in its being true.

1.3 million people live in the greater-Buffalo area and all I see is not much happening here. I see empty factories overlooking empty lakes and rivers. I see empty streets leading nowhere but to other empty streets, empty parking lots in the shadows of empty churches.

Buffalo is the most spiritually evolved city in America. Like Christ, we have sacrificed everything for a better line on the suffering we always sensed was the only truth. In Buffalo, it’s man against God. Leaving your house mid-January is a Grecian odyssey all in itself––.

PURE SURREALIST MONUMENTS TO NOTHING

Soon enough, my friends begin to enjoy the sense of release our inevitable expiration arouses––

We drive on, past half-full warehouses and factories pumping loose, disjointed rhythms into the vast, inhuman night.

We drive on, through the staggering corpses of unused grain elevators, pure surrealist monuments to nothing.

We drive on, past windowless bars where solitary patrons try to trap oblivion in the bottoms of their beer glasses, but never succeed (oblivion).

We drive on, alongside vestigial railroad lines but tonsils were always my favorite body part so who am I to complain?

We drive on, past the leftover remains of Bethlehem Steel’s old headquarters, a creepy mansion on the hills only it’s all alone on the banks of Lake Erie and the dirt is deep like on the buildings in Paris.

We drive on, past the dilapidated cruise ship imported extra–special from Cleveland to collect spiders and rats on the polluted shores of eastern Lake Erie, also creepy.

Until we reach Our Lady of Victory National Shrine and Basilica and the trumpets begin to sound. And the angels on its rooftops sing: “everything you ever thought was true is wrong!”

Five minutes later we are standing dumbstruck in the center of the cathedral’s magnificent atrium, where the walls and ceiling exude the strange inner light the images painted on them ache to depict. Everybody in our group is amazed, silently gaping with eyes large like the black hole that is Buffalo.

“What is a beautiful, amazing place like this doing in Lackawanna?” my one friend asks.

Our Lady of Victory is a typical Buffalo achievement in so far as there’s absolutely no reason why it should exist … but it does … just like Buffalo does … and the reason why is that Father Baker had a vision and committed himself wholeheartedly to its fulfillment. Buffalo is ripe with enigmas and why here?s––and the answer always comes back “because” (Buffalo precedes all rational explanations). There is a fine line between something and nothing and Buffalo manages to walk it straight despite the large quantities of alcohol it consumed in hopes of blurring that line just a little wider. Unlike other cities, where it’s easy to sink into the flow of everything’s fine, in Buffalo, you must be a prophet or drown in utter mediocrity. Buffalo demands existential authenticity, and the rock we push up the hill (only to have it roll back down over us time and time again) is our only salvation. Like Rimbaud in the gutters and back-alleys of Paris, in Buffalo, you have no choice but to remake life; there’s no bullshit left to buy, no palace gates to hide behind (I endure Siddhartha Gautama’s 4 passing sights whenever I walk out my front door). Buffalo is the most advanced city in America; we progressed beyond progress. Our truth is grounded on an intense understanding of everything that is false (or an intense understanding that everything is false). We don’t need to realize the ultimate insignificance of the world; our world realizes it for us. Not only does Buffalo’s faded, tattered industrial landscape prefigure a dawning, postmodern art and architecture, it augers a new way of being. I mark in every face I pass marks of weakness, marks of woe––the sane, saintly sufferings of Christ. In Buffalo, we have exhausted all the tired cliches of American culture, but who needs them anyway? I’d rather run with wild dogs through silent streets than jump from old mall to new mall hopelessly fleeing my own inevitable collapse.

It doesn’t vex me that the world has abandoned Buffalo to the cold, hard night of passing time, impermanence and irrelevance; it just means I have an art gallery of incalculable merit all to myself, a downtown whose jewels were left for me to reap, a lake like a vision and the wind that blows across it proves that I’m alive, a discarded history so rich I feel privileged to watch it unfold. In Buffalo, we have turned something inside out, revealing the paradoxical everything of nothing. Our insignificance is of such great consequence it weighs on me like death; next stop: illumination.

AND NOW, FOR THE FORCED FINALE THAT’S TRUE NEVERTHELESS: in the growls of wild dogs I hear the song of the new American frontier, where being and not-being fade into the fact of we’re here anyway so what are you gonna do about it?––where significance and insignificance meet on weekends for an illicit drink (before returning to their established corners in time for tenure-track office-hours on Monday). We are the still point at which all contradictions meet and become one. I don’t care if you don’t care. The past, present and future is Buffalo’s essence. Someday you’ll join me in eternity.