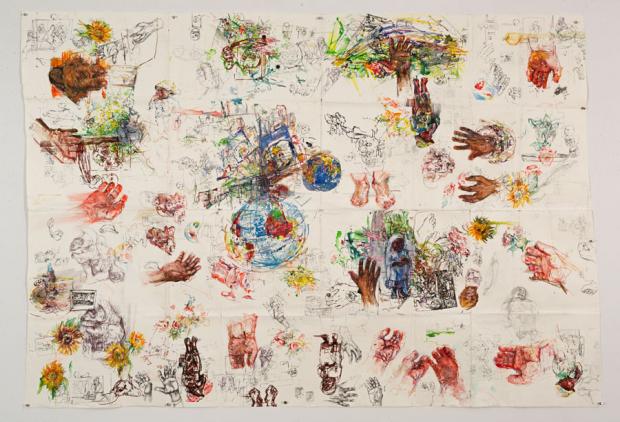 A Body of Work, the current exhibit at the Nina Freudenheim Gallery, consists of paintings and photos of four artists, all the work somehow about body, bodies, human subjects. The work ranges in appearance from misty to sketchy to sardonic grotesque to powerful painterly realistic broaching Michelangelesque.

Ellen Phalen’s paintings in watercolors and gouache and pastels are half-present presences, like dim memories or shadowy apprehensions of past or future actualities. One outstanding work, Little Ellen, is like a faded photo—except that photos don’t fade quite in this way, so more like a faded mental image—of a little girl in party dress and formal portrait pose. A haunting work in a different way is the watercolor called Spectre of Age. It shows a ghostly, incompletely presented figure with something indecipherable on or at its back. Death, it must be, the ever-present doppelgänger. Another work is a hazy portrait of Ed Moses, the painter, not the Olympic track star. (But memory as a psychological faculty has a penchant toward sentimentality. Another work, faintly presenting two toddlers getting acquainted does not avoid this pitfall.)

Judy Glantzman’s paintings in acrylics on small canvases are about carnival, maybe the big one, in Rio de Janeiro, but third world at any rate. Sketch-like portraits of local urchins dressing or dressed up for the big event in poverty finery. (These works, too, skirt sentimentality.) And the portraits are in pairs, of the same youngster or youngsters in the same pose, in one case more finished, more complete, more detailed, than the other. But neither version what you would call a finished portrait. Both versions rather with a deliberately tentative look, deliberate sense of artwork in progress.

Work in progress seems to be Glantzman’s theme. Another work is a huge watercolor and pencil and ink on paper piece consisting of myriad sketch exercises, like an entire sketchpad on one big sheet of paper, with fold mark divisions into sketchpad-size sections. The sketches include numerous versions of hands, in various positions and from various angles, several bodies in peaceful repose—corpses it looks like, in severe perspective view from feet to head—some flowers, some skulls, a messy world globe or two, and some sketches of sketches. Plus one of one of the urchins from the dressing up for the carnival series.

John Coplans has a self-portrait series of body parts that is alternately serious and comic, about the fundamental absurdity of the human situation of a spirit or imagination or self-consciousness or however one might designate—but it can soar, feel empathy, produce poetry and music—tethered to a mortal apparatus. Coplans started his body segments project at age sixty, twenty years ago. One shot is of feet in what looks like a parody of a number at once of the basic ballet positions. No face or head shots, but it’s not too hard to read a grotesque facial image into a hairy chest and belly shot. Various dorsal views, evocative of some putative modern sculptural works in stone. Or ancient stone works, one of the Stonehenge uprights.

Also included are two vertical triptych works of more or less comprehensible jumble sequences of body parts, but upside down, lower leg portions above, then knees, then belly and chest, in hunched, compacted postures. Alternately absurdist and balletic.

Martin Swift has four paintings of naked figures—or naked as much as we see of them, which is limited to head and torso or less—in dark hues against an opaque black background, the subjects illumined by an ambiguous but sufficient light source. Male figures of substantial musculature—though in one case you have to study a minute to determine the gender—as if bodybuilders in pose, or athletes after a workout. What you see is raw flesh, muscle contours, back and shoulders, chest, breast. With facial portraits in just two of the four works, so not the main interest. I think of Michelangelo. One of the sibyls—the one in back and shoulders view, taking a huge book down from a shelf—on the Sistine ceiling. I think of Rembrandt’s famous medical clinical painting The Anatomy Lesson. The double meaning of that title for a painting. Each of the Martin Swift paintings could be called The Anatomy Lesson.

The four-artist show continues through January 14.