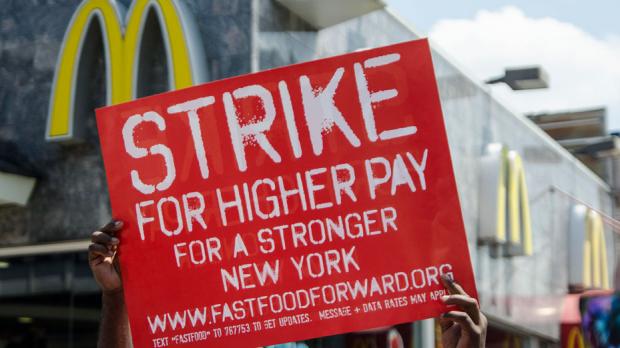 The relationship of the growing gap between rich and poor and the decline of union density is a real one. Unless addressed, the wages of the great majority of the American people will continue to decline against increases in the cost of living. It is a historic fact that only through self-organization can the working people achieve any economic or political goals, including improving their economic strength.

After the onset of the Great Depression, the international labor movement faced a serious decision: Should it unite as one to defend and extend economic rights or succumb to the triple horrors of fascism, poverty, and war? In Europe, the Great Depression and its aftermath, World War II, decimated the working people. In the US, while that period was difficult to say the least, instead of fascism we found our way to a New Deal. During the New Deal until the end of the 1940s, the American working people enjoyed a better standard of living than any other working class in the world. The chief reason for this was the great drive for self-organization. By the end of the 1940s, worker self-organization, as embodied chiefly but not solely by the trade unions, comprised nearly 40 percent of the workforce. Public policy was crafted by the New Deal coalition, and wages and benefits of the workers were vastly improved.

Paradoxically, the decline sets in at the apex of the influence of the trade unions with the passage of the anti-worker, anti-democratic Taft-Hartley Bill in 1947. Taft-Hartley stripped real power from the labor movement and initiated the long decline that continues to this day. It was meant to strip the labor movement of the power achieved during the New Deal, and it has accomplished just that.

Among the worst aspects of the decline is the growing gap between the wealthiest Americans and now almost everyone else. In 1979, the average CEO made about 84 times the income of the average worker in their company; today that differential is at 475 times. Further, according to the Bloomberg Report, the income of the average American household has fallen to its lowest level since 1967 (when inflation is factored into the equation).

Taft-Hartley immediately put pressure on the labor movement in order to reduce its policy role. In short order other pressures emerged. The rush to de-industrialization, the wholesale deregulation of key sectors of the economy (transportation in particular), the breaking of the Professional Air Traffic Controllers Organization, the passage of NAFTA, and two recessions–one after 9/11 and the other in 2008–have further reduced the organized workforce. In spite of all these difficulties, our movement is not afraid and has always fought back.

The “Fight for 15” is one very clear and strong response. The workforce is changing and our economy can produce high-road jobs with good pay and benefits. We need to promote such economic development. However—and here is the most important point—major corporations like Wal-Mart and McDonalds are paying poverty wages. A living wage must be at the top of the agenda for a better and more prosperous future for this country.

The core mission of the Western New York Area Labor Federation, AFL-CIO is the defense of the living standards and working conditions of the affiliated unions and their members. This is the basis of our unity and it must at the center of our program. Further, the organization has taken the stand that we must have community allies in this fight. In point of fact, we need each other. Whether on immigrant rights, temporary workers, strikes and tough contact negotiations, or the need for saving communities decimated by de- industrialization and a changing economy, we must find common ground.

The fight to address the impoverishment of the working people is one such way.

Fast-food workers are planning a demonstration and strike for the “Fight for $15” on Thursday, December 4th, at the corner of Main and Utica streets at 10:30 am.