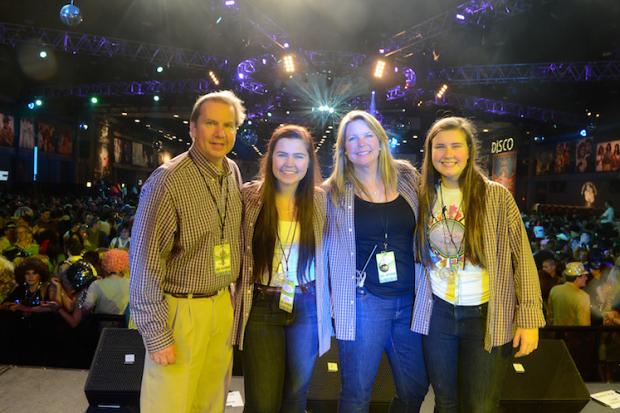 Quoting the immortal—and authoritative—1970s lyrics of disco ensemble A Taste of Honey: “Everybody here tonight must boogie, let me tell ya, you are no exception to the rule.” Thousands of mostly-costumed revelers converged at Buffalo Niagara Convention Center to boogie at the raucous annual World’s Largest Disco on November 29, two days after Thanksgiving.

Now in its 21st year, WLD continues to be one of the area’s largest fundraisers. All proceeds (ticket sales, song sponsorships, vending) raised on this night of sexy dance beats, miles of gleaming polyester, and romping nostalgia goes to a single beneficiary, Camp Good Days and Special Times. The summer camp, located on Keuka Lake, as well as its year-round activities in Buffalo, Rochester, Syracuse, and Ithaca, are for children with cancer, and those in other dire situations. To date nearly four million disco dollars have benefitted the camp.

Camp Good Days was founded in 1979, the exact year that a World’s Largest Disco happened in Buffalo for the first time, in the very same concrete convention center. On the 15th anniversary of that disco event, which drew 13,000, Buffalonian Dave Pietrowski, with assistance from a band of friend-volunteers, staged a revival. As he tells the story, his impetus was a forlorn, early-1990s downtown the Saturday night after Thanksgiving. Dave vowed to change that.

Pietrowski, president of LoVullo Associates, an insurance brokerage located in Depew, threw the first World’s Largest Disco revival in 1994. Inspired by his mother, who taught her children to do charitable good deeds, he knew that the event had to be a fundraiser.

Did he envision then that he was fashioning a Buffalo tradition? “I certainly didn’t know it was going to be, but I’m glad it is,” he says in a production office just off what will soon be the oversized dance floor. This is hours before doors will open to 1,400 VIP ticket holders at 8pm and 7,000 regular ticket holders an hour later. Dave has not yet changed into his checked white and maroon button-down shirt, this year’s inner-circle uniform: He’s still in his St. Joe’s sweatshirt (his high school alma mater).

Also in the office is one of Dave’s two teenage daughters, Alexa, who will be working WLD along with her sister Taylor, Dave’s wife Mary, and 400 other volunteers. ”You told my mom that there were only going to be five discos,” Alexa says.

“When we were first dating,” he counters, “I said ‘This thing will only last a couple of years,’ and now it’s the 21st year.

”Right before I can’t wait for it to start, and then once it gets going I can’t wait for it to end,” Dave says. And what is it like to look out over the sea of the thousands of disco attendees? “The energy is incredible. I love watching people smiling and laughing, and the moments when people recognize each other.”

For those who have not yet been, many come in novelty, oversized accessories: Somewhere along the way, faux ‘fros became a go-to item. This is a night to bask in the cartoonish aspects of the decade: freaky dance moves, wacky iconic stars (immortalized on large banners festooning the walls), and absolute love-in vibes.