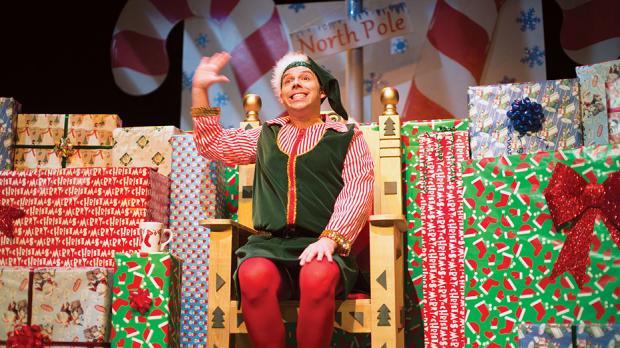 Marc Sacco is currently appearing in David Sedaris’s SantaLand Diaries at Road Less Traveled. He plays a cynical New York department store employee required to dress as one of Santa’s helpers and to shepherd children and their often odious parents in to see Santa Claus during the Christmas shopping season. Among his numerous stage appearances, the Niagara University graduate has appeared many times at MusicalFare, including Adrift in Macao, La Cage aux Folles, Rent, Avenue Q, Falsettos, their production of Bat Boy at Studio Arena, and Altar Boyz for which he won an Artie Award. For BUA, he has done, The Temperamentals, Little Dog Laughed, Valhalla, Naked Boys Singing, Southern Baptist Sissies, and Pterodactyls, and also he well received cabaret shows: Marc with a ‘C’ and Marc with a ‘C’ Quel. An actor of great range and versatility, with his puckish good humor and mischievous demeanor, Sacco seems well suited to his current role. Here, he answers The Public Questionnaire.

What word would your friends use to describe you?
Matter-of-fact.

When and where were you the happiest?
At my 30th birthday roller disco party.

What is your greatest fear?
Flying.

Which talent do you most wish you had?
I wish I could play piano.

What would you change about your appearance?
I would be taller. I always wanted to be at least six feet tall.

What trait do you most dislike in others?
Excessive negativity. I also dislike this within myself.

What do you most value in your friends?
Loyalty and being trustworthy.

What is your guilty pleasure?
The Golden Girls. But I don’t really feel guilty about it.

Who is your favorite fictional hero?
Sherlock Holmes.

Who are your real-life heroes?
Anyone who is raising or has ever raised children. That’s a hard job.

What do you consider to be the most overrated virtue?
Chastity.

On what occasion do you lie?
When it will spare someone’s feelings.

If you come back in another life, what person or thing would you like to be?
A giraffe. See fifth question above.

What is your motto?
Take responsibility for your actions.