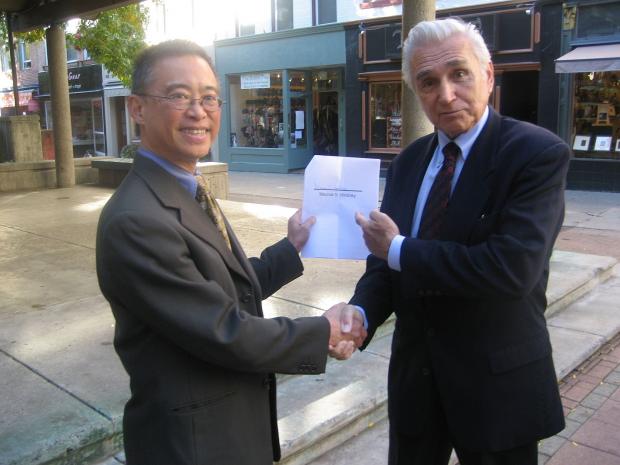 Today’s GreenWatch focuses on the recent passing of long time friend and  Congressman Maurice Hinchey. Hinchey had a storied career as a New York Congressman that represented a district that spanned eight counties fromt he Hudson Valley to the Finger Lakes from 1993-2013. He was instrumental in establishing New York Stateand National  initiatives including the NY State Superfund Program, NYS Community Right to Know, and Medical Marijuana and health initiatives.  He was a strong proponant of clean Great Lakes.  We have missed him since his retirement.

We are pleased to republish the following In Memorium from Walter Hang of Toxics Targeting in Ithica. Walter worked with Congressmen Hinchey on  a variety of important projects involving the district and the State of New York, including Shale Fracking.

I am sad to report that legendary environmental champion Maurice D. Hinchey passed away on 1½2/17.  I had the privilege of working closely with Maurice for more than 30 years when he chaired the Assembly Environmental Conservation Committee and after he was elected to Congress.  Maurice was an important ally in our campaign to keep New York 100% shale-frack-free.

I believe that the EnCon Committee under Maurice’s leadership for 14 years set the national standard in proposing/adopting landmark legislative and regulatory toxic clean up initiatives, including the:

Community Right to Know, which required past disclosure of historic hazardous waste dumping practices in New York; and

During those halcyon days, Maurice and his Assembly colleagues took on all toxic polluters.  A home was burned after illegal mob dumping was reported at the infamous Al Turi landfill.  More than one Assembly staff/rep was armed for self-protection, including Maurice himself.

Toxics Targeting is fortunate to have worked with Maurice and all his EnCon Committee Chair successors, including Richard Brodsky, Tom DiNapoli, Bob Sweeney and Steve Englebright.

In the early days of the shale fracking battle, Maurice was an important signatory to our coalition letter which requested that the Draft Supplemental Generic Environmental Impact Statement be withdrawn: Congressman Hinchey’s Signature on the Coalition Letter to Governor Paterson

It is important to understand that New York’s de facto shale fracking moratorium was adopted thanks to DEC Commissioner, Pete Grannis, who served for many years on the EnCon Committee with Maurice before taking the helm of DEC.  That single act saved New York from fracking.  Thanks, Pete, former Executive Deputy Commissioner, Stu Gruskin, and former Environmental Policy Advisor to Governor Spitzer, Judith Enck.

I invite you to look back at powerful photos of valiant leaders who stood shoulder-to-shoulder with tens of thousands of grassroots activists when the chips were down in the battle to protect New York from shale fracking.  This is very much the reason why our state was safeguarded when the rest of the nation got fracked.

New Yorkers should be extraordinarily grateful for all the help we received in winning that epic battle.  Other states got fracked because they could not muster similarly strong political coalitions and pursued failed strategies.  In New York, we had great friends in high places whom we could rely on when everything was on the line.  I believe that was the crucial difference.  Thanks one and all.

Maurice’s leadership will be missed very much, but never forgotten.  Our campaign is working hard to carry on New York’s great tradition of fighting hard and well in order to protect the environment and public good.  Too many challenges to count lie ahead.