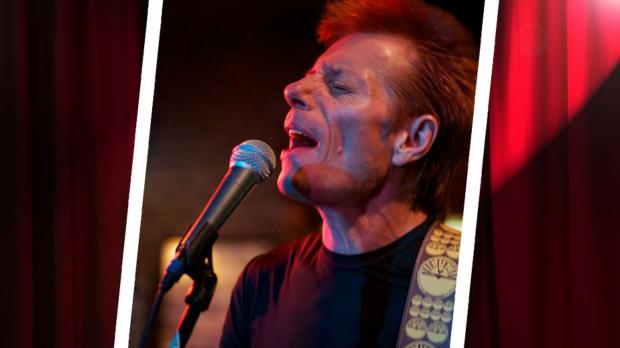 With a dry and quiet sense of humor and his signature shock of Dutch-boy hair, multitalented Tom Makar has been a constant presence on the Buffalo theater scene since 1991. In fact, his name has been associated with more than 300 local productions. Makar  is predominantly known as a sound designer and composer, but he has also appeared as an actor and has worked as a director.

Makar has a distinctive face, which, for all its expressiveness, somehow never betrays what he is thinking. Is that a hint of smile? Is it a smile of amusement, of approval, of disapproval?

For a man of mystery, Makar  is very well liked and works constantly. And our theater community is richer for his presence.

When he is not in a theater, he is often to be found performing live rock and roll with Wild One.

Makar ’s work can currently be seen on the stage of the New Phoenix Theatre, where he has directed the Mary Chase’s classic 1944 comedy, Harvey, about Elwood P. Dowd and his friendship with a giant talking rabbit that only he can see.

Makar’s past directorial outings have tended to emphasize his musical talent: the Kavinoky Theatre’s productions of Hank Williams: Lost Highway and Always…Patsy Cline; Warren Leight’s Side Man at Ujima. He co-directed and composed songs for a Shakespeare in Delaware Park production of Love’s Labour’s Lost. This time, however, Makar  has directed his large, round eyes onto an imaginary rabbit.

Here, the omnipresent yet somehow elusive Tom Makar submits to the Public Questionnaire:

What word would your friends use to describe you?
Perfectionist.

What quality of your current project is most unlike your own personality?
It’s charming.

What quality of your current project most reflects your personality?
Hope springs eternal.

When and where were you the happiest?
On vacation with my wife, Julie. Let’s say Monument Valley, August 2015.

What is your idea of hell on earth?
Causing pain to those I love.

What is your greatest fear?
Wasted potential.

Which talent do you most wish you had?
Congeniality.

What superpower do you most wish you had?
Always wanted to fly.

What would you change about your appearance?
Resting face (apparently seen as judgmental and pessimistic).

What trait do you most despise in others?
Narcissism.

What trait to you most despise in yourself?
Despise is too strong a word to describe my self-improvement motivation.

What do you most value in your friends?
Their willingness to confide.

What do you consider to be your greatest accomplishment?
Too easy! Winning Julie’s love.

What is your guilty pleasure?
Car shows on Velocity Channel, especially Street Outlaws.

What character from fiction do you identify with most?
Randy “The Ram” Robinson.

What person from history do you identify with most?
John Adams.

What do you consider to be the most overrated virtue?
Consistency.

On what occasion do you lie?
When the questioner has no business knowing the truth.

What was the subject of your last Google search?
Olivia Munn.

If you come back in another life, what person or thing would you like to be?
Malala Yousafzai.

What is your most prized possession?
Guitar collection.

What is your motto?
Music sings eternal.