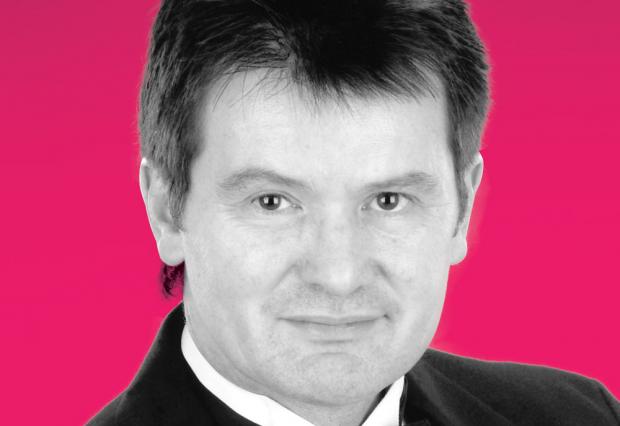 In the otherwise giddy world of Die Fledermaus, insults are never taken lightly. Johann Strauss Jr.’s instantly popular 1874 operetta has as its central character Eisenstein (to be sung by Robert Zimmerman) who is bedeviled by his own incapacity to control himself. He insulted an official, which has landed him eight days in jail, largely due to the incompetence of his lawyer.

Moreover, his tactless abandonment of inebriated friend Falke (Jeffrey Coyle), dressed in a bat costume (hence the title), on New Year’s Eve in the center of town has motivated the latter to arrange for an elaborate revenge to enfold at a masked ball being thrown by one Prince Orlovsky, a rich and gregarious Russian (sung here by Elizabeth Wojtowicz). Thus transpires a humorous succession of mistaken identities and flirtatious tête-à-têtes, all set to Strauss’s gorgeous waltzes and songs. This digs Eisenstein deeper into his hole: He makes a pass at an apparent Hungarian countess who in fact is his wife Rosalinda (Holly Bewlay) in disguise. At the end the whole party ends up at the police station where everything is sorted out. (All this would make great reality television.)

A key supporting character is the singing teacher Alfred, who it seems is incapable of shutting up. This Buffalo Opera Unlimited production of Die Fledermaus has Stephen Macdonald, a veteran Alfred, singing up a storm. Macdonald, a lyric tenor, feels Strauss’s music fits very well upon his voice, and he enjoys his incorrigible romanticism as he tries to re-woo Rosalinda, his former lover who now will have nothing to do with him despite the torch he holds for her.

“He’s a bit of a roué,” Macdonald concedes, noting how completely uncaring he is about Rosalinda’s marriage and her determination to be faithful to Eisenstein. At the same time, he is willing to sacrifice for her, inasmuch as he agrees to pose as her husband, who ducked out to go to the ball, when the jailor comes to take the convicted prisoner to jail. Alfred’s gallantry means he spends all of Act II in prison. “He is genuinely in love with her and is determined to win back her affection,” says Macdonald, a love that has remained unrequited but true. “You don’t get the impression that there is a string of Rosalindas.”

The source materials for Die Fledermaus were a German play The Prison (a farce though the title seems to belie that) and a French vaudeville Le réveillon, a reference to a traditional French supper party on New Year’s Eve. The final libretto, an adaptation by Richard Genée, transformed the meal into a ball, leaving Strauss ample opportunity to show off his musical talents for which he was justly famous.

A lot goes on in Die Fledermaus, and it benefits from careful listening (it will be sung in English). One performance custom is to announce the arrival of local (for the audience) “luminaries” who make appearances in the second act. So far we know that Buffalo Common Council member David Rivera is signed up; the rest must remain a surprise. Alfred, a nineteenth century Sinatra, has the musical gifts to still make Rosalinda swoon, despite her best efforts not to, as he rolls out a cavalcade of snippets of love arias. Die Fledermaus has an abundance of passionate music and ribald comedy all mashed up in a delightful couple of hours in the theater. “It gets complicated, in the usual way farcical productions do,” laughs Macdonald. And that is half the fun.