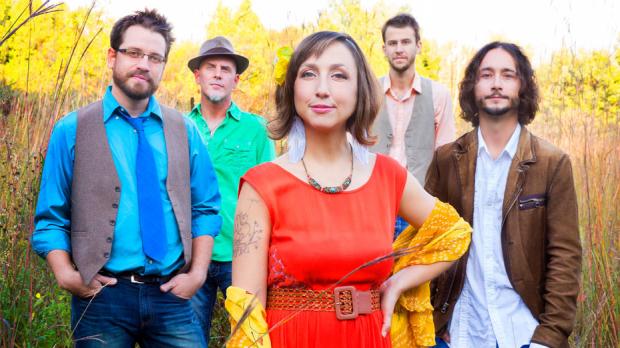 Growing up isn’t easy. It’s fraught with looming uncertainty and awkward, uncomfortable moments galore. But some of us roll with the punches more gracefully than others. Michigan-based quintet the Ragbirds, who’ll play the 9th Ward at Babeville this Friday, have spent the last few years in a quirky, coming-of-age period, facing a number of personnel changes while parenthood entered the picture.

There was a time when such tumult would permanently break most bands. But we’ve moved into an era where life’s most basic demands—food, shelter, security—aren’t often met by a career in the arts, even when your talent floats to the top of the heap. Periods of time spent in bands are transient, and careers in music lack sustainability, more so than ever before. Most often, people opt out because they’re not surviving well, not because of comparatively lofty issues like “artistic differences.”

“The line-up changes have been both good and bad,” front-gal Erin Zindle tells me over the phone during a tour stop last week. “We’ve been so lucky to work with great people, and these are all relationships that have ended peacefully. But it’s been challenging in that you have to start fresh each time, make room from the new energy and the new perspective… and it takes time to get the band fully gelled again. It may have slowed down the momentum we had going a few years ago.”

Thankfully, The Ragbirds don’t have a ton of competition from other, similar sounding bands. Serving up a gypsy-inflected world-music stew that defies categorization, the band has the percussive kick of 1990s roots-sensation, Poi Dog Pondering, married with the Eastern Mysticism of It’s a Beautiful Day, a late 1960s Bay-area band that caused a stir with its violin-wielding vocalist, David LaFlamme. Top that off with the feminine touch of Zindle’s capable croon and what you’ve got isn’t easily replicated: the Ragbirds are a singular sensation.

“People’s lives change over the course of two or three years,” Zindle said. “They get married, have kids… different things pull us in various directions. It’s a hard life being on the road, and even though people like to glamorize it, that’s not an accurate reflection. There’s no fancy bus or hotels every night the way we have to do it. I love touring because it keeps me engaged and alert. I tend to get too comfortable when I don’t have a specific place to be at a certain time, so it’s a positive thing for me. But it’s definitely not for people that require a high degree of certainty.”

Before Zindle was maturing with her band, she grew up in the more traditional sense right outside of Buffalo in the Lancaster/Depew area. As a classically trained violinist with a nagging creative vision, she left when she was 19 and headed to Michigan. But she still gets excited about coming back here.

“I feel a general nostalgia for my hometown,” she said. “When you grow up in a suburb there’s always a mystique about the nearby city—’the cool place’and I still experience that thrill along with a feeling of familiarity and connectedness.”

Zindle says the band released their 2013 live disc, We Belong to the Love, in part as a way of appeasing fans that have long maintained that the band’s true spirit doesn’t come across as well in studio recordings. As a means of hopefully bridging that gap, they’ve been playing more and more new songs at their shows as they ready a follow-up to 2012’s Travelin’ Machine.

“It’s something I’ve heard from fans repeatedly over the years, and we’ve had a hard time accomplishing that,” she said. “They’re two completely different mediums, and it’s not so simple as ‘paint your canvas in the studio and then duplicate it’—that’s not how it works. I’m really ambitious and tend to rush into things, so lately I’ve been trying to pull back the reigns. We’re giving the new songs extra time to develop live and have resisted the urge to run into s recording studio with them.”

Once the new disc is ready, Zindle forecasts a return to the more rigorous touring schedule of yore—The Ragbirds used to play over 150 shows a year, traveling in a modest van running on converted veggie oil. Thanks to a successful kickstarter campaign, a larger van was acquired last year, though the awesome low-cost fuel-source remains the same.

She married percussionist Randall Moore in 2006 and recently had a baby girl, Aviva, which has also been a catalyst for slowing down.

“Having a baby changes everything,” she said. “We couldn’t go quite as far for quite as long, and so we’ve stayed a little closer to home this year. Each of these decisions has affected the reach and hype of the band. But it’s all part of the journey and I wouldn’t change anything. My husband and I are the two original members of this band, and our love is at the heart of the music from the beginning.”