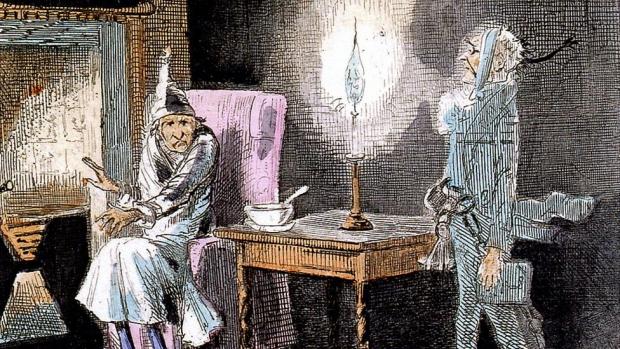 Many of us see nothing but bustle in today’s commemoration of Christmas. Even those who have no patience with the production should recognize that the season is a sacred time of year for a great many. The line, however, between sacred, spiritual, and spooky has never been as sharp to the preindustrial mind as the postindustrial world draws it. Christmas was once charged not just with holiness but with supernatural intrigue.

All world societies of any development have had their traditional power-days, points of the year noted for being spiritually energetic. Most of them are based around the solar points of the year, the solstices and equinoxes. Some festivals fell on the points in between, such as for the Celtic societies—the Irish, Scottish, Welsh, and pre-Roman French. Our Halloween, an evolution of the Celtic Day of the Dead, is one such cross-quarter day, halfway between the fall equinox and the winter solstice.

The Bible doesn’t have much to say about the date of the birthday of Christ, and there isn’t a month in our calendar in which some outfit hasn’t commemorated the event. But as the Church grew and its philosophy settled, some date needed to be fixed for one of its most important events. The Church picked Midwinter Day to celebrate its Savior’s birth.

You’d have thought the agrarian societies onto which Christianity was imposed would have valued the day with the greatest daylight. You’d have thought that the Church would have picked Midsummer’s Eve (June 24), the day appointed to celebrate the summer solstice. Our Christmas Eve is the calendar inverse, based around the day of the greatest darkness. This could seem contradictory.  Jesus is, after all, a solar figure.

Never forget, though, that from the summer solstice forward, the days shorten until they bottom out at the winter solstice. From then on they grow until they peak again. The winter solstice is the symbolic nativity of the sun, the rebirth of the cycle. It’s a good date to pick for the birth of humanity’s second chance, its Redeemer.

Our Christmas owes a lot of its window dressing—colors, images, symbols—to old Germanic midwinter festivals. The Church was always grafting its own high points onto pagan celebrations. It was the sugary spoonful that helped the conversion go down. Few Christian events have completely shed their pagan trappings, even today.

Midwinter day is dark, though, and Dark Age societies piled a lot onto it. It was a night for the light-haunters to come forth and prowl the fringes of human society. The family dead might well return through the gaping door. Who knows what else might come with them?

By the Middle Ages most of the ideological fighting was done, and Christmas Eve was at least outwardly a sacred night. That doesn’t mean it lost all its baggage. In legend and folklore, Christmas Eve was a night for spontaneous supernatural manifestations. Visions and prophecies were expected. The dear human departed were prone to reappear. Cows and sheep in the barn might be spotted bowing down to worship. Dogs and cats might be overheard praying in human speech. The form of the Christ Child might even put in appearances around the world, turning up as a helpless waif to test the kindness of those it meets. And what is Santa Claus—an ageless, deathless, costumed superhero with a flying sleigh and an inexhaustible bag of presents—if not some sort of fairy-being? Menacing apparitions like Death or the Devil were thought to claim or scare people who broke the sanctity of the evening. That night, both were working for God. The Alpine figure of the Krampus is surely in the mold.

By Shakespeare’s day the tradition of the haunted Christmas Eve was so well set in folk memory that many plays and ballads allude to it.

By the reign (1837-1901) of England’s Queen Victoria, Christmas Eve had become a delightful night to be titillated. Telling spooky stories around the fireside was part of the family celebration, particularly among English families. Charles Dickens’s (1812-1870) A Christmas Carol (1843) was just the flower, not the kickoff of the tradition. Prominent American writers including Washington Irving (1783-1859) used Christmas Eve as the basis for ghostly stories.

Only in recent decades have we completely lost the popular sense that Christmas Eve should be mysterious as well as unflinchingly good. The tradition is echoed, if not remembered, in the lyrics of the pop song It’s the Most Wonderful Time of the Year (1963):

And tales of the glories

of Christmases long, long ago.

Most Americans probably think that Halloween would be the night for heightened supernatural reports. As I review my own files of contemporary ghost stories and encounters from Western New York, I don’t find that automatic spike on Halloween. I do find a strong connection to the Christmas season, particularly at East Aurora’s preserved Arts & Crafts Movement community Roycroft. You seldom get through a holiday fortnight without hearing some new campus tale from the glow of the winter solstice, and it’s probably to be expected. The time itself was of deep significance to the Roycroft’s mercurial founder, Elbert Green Hubbard (1856-1915), and he held annual celebrations of the season if not exactly the religious event.

This might be the time to begin a five-article series through the month of December presenting Christmas-season ghost stories at Roycroft. Winter was the season of storytelling, anyway, for many world societies—including the Iroquois/Haudenosaunee of upstate New York, whose culture and spirituality was deeply admired  at Roycroft.