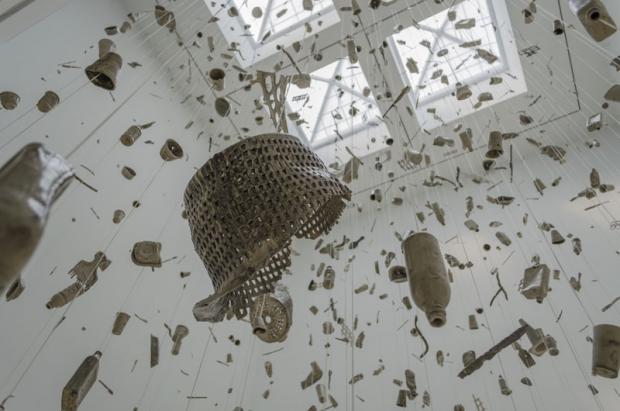 At the UB Art Galleries, a sprawling exhibit considers artists’ actions and explorations outside of the studio

Wanderlust, the gargantuan show at the UB Art Galleries both locations—North Campus and Anderson Gallery—is about taking risks by getting out of the relatively safe and secure environment of the artist’s studio, into the real world, real environment.

Sometimes risks possibly too far. One piece consists of documentary materials relative to a proposal by Dutch artist Bas Jan Ade to cross the Atlantic Ocean solo in a 13-foot sailboat. A video of a choir of some of his art students singing sea chanteys, some sea chanteys sheet music, and a slightly foggy photo of the artist in his little boat, which looks about the size of a bathtub. Radio contact was maintained with the artist for three weeks after he set sail, but then suddenly was lost, and he and his little boat were never seen or heard from again. Putting the best face on the grim matter, wall copy states that “his disappearance became a part of the work, serving as a poignant metaphor for our collective existential pursuit of the sublime,” and ultimately “led to his becoming a cult figure in contemporary art.”

Multiple works by two score and more artists. Some superb. Such as Roberley Bell’s part personal nostalgia piece, part historical archive, part environmental, part political series of photos of gnarled survivor trees in a public park and elsewhere throughout the city of Istanbul, Turkey, after protests of the government’s attempt to demolish the park to make way for a shopping mall. The protests grew into large-scale demonstrations about civil rights issues, and foreshadowed the failed government coup of 2016. An unfinished story.

Or Ana Mendieta’s photo series of her site-specific sculptural works that blend human female figural imagery—variously explicit and vague and tenuous—and resonant backdrop settings—usually in nature, but sometimes architectural, sometimes ad hoc fabricated by the artist—in a personal mode of artmaking that she describes and explains thus: “I work with the earth, I make sculptures in the landscape. Because I have no motherland, I feel a need to join with the earth, to return to her womb.” Her sense of having no motherland has to do with her Cuban nativity, but then being sent by her parents to the United States during the tumultuous early period of the Castro revolution. The works on show are from her Silueta Series, made in Mexico.

Works that range from simple and direct as to artistic point and significance—British artist Richard Long’s A Line Made by Walking—straight as an arrow pathway of downtrodden meadow grasses as a result of the artist’s multiply traversing the line back and forth, and poignant minimalistic evocation of the venerable tradition of particularly British landscape art, Constable, Turner—to other works less clear as to significance or ultimate effect—William Lamson’s Untitled (Infinity Camera) urban river trip video sore burdened with infinite-regression-mirror visuals of dubious to inscrutable purpose or import. Wall copy commentary talks about how in “resembling a dérive, in the Debordian sense, the work is then the river’s own psychogeograpy…” Theory to the rescue.

And in various media and genres, on topics and issues from serious—Millie Chen’s silent video treks across “horror geography” grasslands around world genocide locations, or Mary Ellen Strom’s quiet cry of anguish work about the devastation of her beloved Montana pine forests by burgeoning numbers of mountain pine beetles, a climate change effect—to whimsical—Allan Kaprow’s photo called Taking a Shoe for a Walk, showing a small group of park strollers, each dragging along a shoe or boot on a string, like a recalcitrant puppy on a leash—to insistently ephemeral—footage of a project by the Canadian collaborative Blue Republic painting shelf rock along the north shore of Lake Huron with lake water on a sunny summer day, in patterns that dry and disappear after about ten minutes, while work on other parts of the painting are still in progress.

Nor—appropriately enough for a show about getting outside—is the artwork confined to gallery spaces. Documentations on display regarding several extra-gallery performance works, such as by the Los Angeles collaborative Fallen Fruit, which recently planted several dozen fruit trees in the Buffalo Fruit Belt area. A photo of the two-man collaborative team and a local resident volunteer and their newly planted peach tree on property at the corner of Carlton and Peach streets.

Or Teri Rueb’s Times Beach project, comprising a free downloadable GPS-based app to accompany a self-guided tour of the former toxic waste disposal site on the Buffalo waterfront, since remediated to viability levels for resident fish and wildlife now abundant at the site. Nature sounds and ambient noises interspersed with precise-location-specific commentary on the history and ecology of the site. Download available through the Apple App Store or Google Play, or search “Times Beach Rueb” and follow directions. (You’ll need a well-charged smartphone, and headphones or earbuds.)