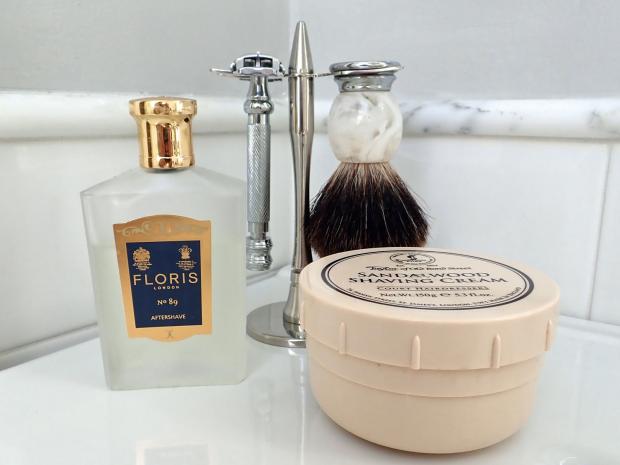 Despite the safety razor in his medicine cabinet, my father used, and taught me to use, an electric razor. He had one of those microphone-looking things with three rotating blades, a frightening proposition if you thought about it too much. Shortly after my first shave, Mom squeezed a major right of passage into a department store visit and nonchalantly bought me my first razor, a black electric Norelco the size and shape of a pack of smokes. Almost instinctively, I hated that thing. Perhaps I was resisting the fast-approaching adulthood that my Norelco signaled, or maybe I sensed that it wasn’t a legit shaving device. Either way, my response was to grow a pathetic high schooler’s beard, one which haunts me to this day via graduation photos. I feel like there should be a law against wearing a beard if your mustache doesn’t connect to it. Like seatbelt laws, robbing you of this liberty would be for your own good. I’m sure we can gather some stats on this.

I shaved that wispy mess on Thanksgiving Day in 1990 at my sister’s house in DC. I was 20, and it was just time. My father—an obvious supporter of the proposed Facial Hair Laws—was ecstatic, hovering in the threshold of the bathroom, offering advice, picking up bits of fallen beard that missed the sink. When I was done, he actually snapped a photo of me, my expression somewhere between relief and incredulousness. I never realized how much he hated my paltry crop of adolescent facial hair until seeing his rapture at my bare face that day. He literally gave thanks, though not so much to me as to whatever power was responsible for my having finally come to my senses.

Barbasol and Gillette got me through decades. Like everyone, I started using a Gillette Mach 3 (how a razor relates to high-speed jets I still don’t understand), and no matter how much I practiced I always had ingrown hairs pocking my neckline. And those Mach 3 blades were, and are, expensive. “Give them the razor, sell them the blades,” is a hallmark of capitalism, and for those of us who prefer to live with less than all of the facial hair our DNA has bestowed on us, we play into that scheme with predictable obedience.

On top of all that, it’s the damn Mach 3 that was leaving me with a pock-marked neck, something I was accepting as inevitable—as my fault.

This year, I finally hopped off the Barbasol/Gillette carousel. I went cold turkey, and for that I am giving thanks this holiday season. The Mach 3 and a couple spare blades went into the bathroom vanity drawer, and I bought a safety razor not unlike the one parked in my father’s medicine cabinet 30+ years ago. It has changed everything I ever knew about shaving.

Unfortunately, the beautiful woman in my life now wasn’t directly involved in my first safety razor shave. Instead, I watched some Irish guy on YouTube show me how it was done (the comments suggest that he is a surrogate father-figure for many men), and my first pass was, well, passable. There were two nicks, but otherwise I came out largely unscathed and clean shaven. The biggest surprise was that my ingrown hairs didn’t show up. I checked the mirror like someone fearing they’d contracted a rash, but the splotchiness never returned. I was flummoxed.

My technique has evolved, and because everyone’s facial hair is different, there’s no single method I can recommend. For example, I have a relatively fast-growing neckline of hair that comes out pointing from left to right, so in order to shave “against the grain” I actually have to shave from right to left. Yeah, like I said, likely not applicable to your face. But the Irish man is a helpful chap, and once you’re up and running you can tweak your technique to your own crops until it’s second nature.

Once you’ve mastered your technique, the best part of shaving with a safety razor is the shave itself: clean, precise, close, and no ingrown hairs. Maintaining a beard-line is similarly exact. Barring a steam-bath followed by a masterful barber slapping a straight-razor across a leather strop and then gently dragging it across your jugular, there’s nothing that can beat a dialed-in safety razor rig.

The second best part of shaving with a safety razor is all the great smelling goodies you get to indulge in. Bye bye, Barbasol; hello, St. James of London Sandalwood & Bergamot Shave Bucket, an alcohol, sulfate, and paraben free old-school shave cream with hints of jasmine, amber, and vanilla. Barbasol comes in seven varieties with names like “Original,” “Sensitive Skin,” and “Arctic Blast,” while high-end creams come from myriad makers in scores of pleasantly named scents.

Then there’s aftershave. Omg. Well, you can use aftershave with a Gillette and Barbasol rig, but for whatever reason I never did. I’m not going to go into it too far, but we will certainly revisit aftershave repeatedly here at Body Buzz. It’s a delightful rabbit hole filled with all kinds of fine buzzes.

The third best thing about shaving with a safety razor is the environmental impact reduction. Aside from the cap to my shave creams, there’s no plastic involved in my shave these days. The razor  and the blades are stainless steel, and the blades are (literally) paper-thin yet can last easily as long as a Mach-x blade. Packaging on a ten pack of traditional blades is a tiny, recyclable cardboard box, and thin piece of paper smaller than a gum wrapper encases each blade.

Comparatively, the plastic packaging on a five-pack of Mach 3 razor blades is of criminal proportions, let alone that every blade also contains non-recyclable plastic. Gillette has something like 64 manufacturing facilities in 27 countries, and its products are sold in over 200 countries and territories; the math is staggering. We know this: Gillette is not making those blades to last any more than Dunlop Tire is making decade-long-wearing treads (they hold the patents) or Hewlett-Packard is offering us efficient ink cartridges. Such planned obsolescence completely dispels the notion that free-market capitalism naturally promotes the highest quality goods. To the contrary.

Gillette is bad, but Barbasol may be worse. Barbasol’s ingredients include: triethanolamine (made from two highly toxic agents), isobutane, laureth-23, fragrance (that’s all it says), methylparaben, propane, propylene glycol, and propylparaben. Did they say propane? Is that two types of paraben? Those are the same parabens found in breast tumors, folks, and which have a pretty lame track-record in study after study. Sure, parabens are the same reason I can pick up a rusted can of Barbasol from 1982 at the fishing cabin and get pure white foam out of it today, but that should be more frightening than reassuring. I mean, new-old-stock shave cream is decidedly not a thing.

The fourth great thing about shaving with a safety razor is the price. Based on Amazon pricing, a Gillette Mach 3 blade will run you roughly $2.75. A high-end Japanese steel safety bade like the Feather will run you about $0.40 each. In my experience, the Feather can last just as long as the Gillette. Shave creams come out a little more expensive for the fancy smelling stuff that I like, but excellent creams are available for what you’d pay for Barbasol’s “Mountain Blast” or “Pacific Rush” (no, I’m not making up these names).

Lastly, the absolute best part of shaving with a safety razor is how sophisticated it is. Not that I pretend to be Don Draper or anything, but there’s a manly, cultivated feeling that comes from pulling together the anachronistic shaving kit’s various components and doing the job right. It’s actually akin to how I felt about cigarettes back when I smoked: this is a special time, just for me, to just do this one James Dean-esque thing. It slows me down in a good way, and converts bathroom time from chore to pleasure.

My father did everything right, minus two child-rearing errors that his generation were simply blind to: He failed to teach me Italian, and he failed to teach me to shave with a safety razor. Forgivable, understandable, at least one of those things is easily remedied. Hint: It’s not speaking Italian.