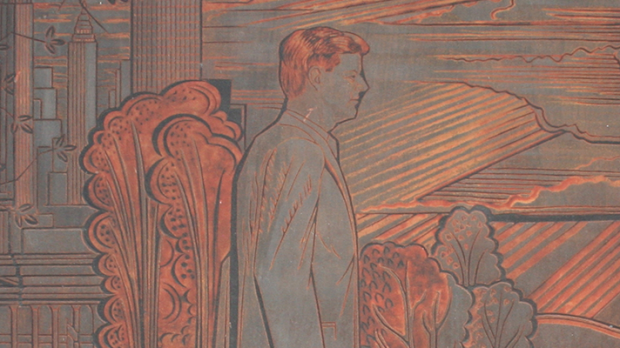 First, drive to the village of Lewiston and pick up coffee and freshly baked Italian cookies at DiCamillo’s Bakery at 535 Center Street. Turn left on 4th Street and drive south a quarter mile to Artpark to see the restored Caroline Doherty installation The Place Where We Take the Canoe Out of the Water, a series of Tuscarora-language excerpts from the Thanksgiving Address. The kids will like the Beat Blossom, the pixie houses, and watching the bundled-up fishermen roaring up the Niagara River in their little speed boats, which then drift back downstream with the current because that’s how one catches steelhead and enormous Pacific salmon. Before leaving Lewiston, taken them to the 2009 waterfront sculpture Freedom Crossing, which is what that place was for the first six decades of the 19th century. Harriet Tubman and Frederick Douglass may have worked with locals like Josiah Tryon, a volunteer on the Underground Railroad, whose house is nearby.

Two and a half miles north along River Road is a new project of the Western New York Land Conservancy, the Stella Niagara Preserve. It is a subtle and extraordinary place in any season, either a 15-minute tromp over grassy paths (there’s never as much snow in Niagara County as there is in Buffalo or points south or west), or a site for deep contemplation.

The property, formerly owned by the Sisters of Saint Francis who still operate the school in the old palace above, is 29 acres of riverfront meadow and forest. The Conservancy is restoring the native plant species, a project that is now three seasons along. The waterfront portion is at a very calm portion of the Niagara, a very wide part, barely disturbed by motorboats. A year after the United States invaded Canada in 1812, the British landed precisely here, then marched north about six miles to take Fort Niagara—again.

Walk down to the river, then back up past the tiny locked-up white chapel, which has its own story: Before the ice boom was first installed, the lower Niagara River would occasionally flood this specific spot, which is a good fifteen feet above the water. The religious experienced the chapel’s escape from the epochal 1952 flood as a miracle, and commissioned Polish sgraffito artist Jozef Slawinski to create the murals inside the chapel.

Uphill from there is another Slawinski piece: his homage to the two critical Catholic persons of the 1960s, John F. Kennedy and Pope John XXIII, the pope identified with the great changes that are credited with empowering anti-communist revolutionaries in Poland as well as with (if one is devoted to the Latin mass) disrupting centuries of traditional observance.

There are two quotations inscribed side by side on the exterior of the structure, which is entirely unenclosed and open to the elements. One is from Pope John XXIII, a nice prayer for peace that has no particular claim on our contemporary consciousness. The other is from Kennedy’s inaugural address. Americans know that speech from the ringing phrases he composed with Ted Sorensen, especially Kennedy’s bold assertion that we would “pay any price, bear any burden, meet any hardship, support any friend, oppose any foe, ” in order to protect liberty.

“My fellow citizens of the world: ask not what America will do for you, but what together we can do for the freedom of man…With a good conscience our only sure reward, with history the final judge of our deeds, let us go forth to lead the land we love, asking His blessing and His help, but knowing that here on earth God’s work must truly be our own.”

This 1964 memorial to Kennedy was one of the earliest public commissioned works, if not the earliest, after his assassination in November 1963.

The Cold War context makes it a social document, but the image of Kennedy itself is elegant and heroic and compelling. It’s the kind of presentation that would be at home on the National Mall in Washington—but it’s here, in a specific cultural setting, in a natural setting, that is accessible in the way that a European shrine is accessible. The most famous of those are similarly situated in a quiet places like this, hillside near flowing water, amidst trees that in this season are bare yet still alive with chickadees, cardinals, jays, juncos, and an occasional bald eagle. If Slawinski’s celebration of Kennedy seems naive in light of what we’ve come to learn about what some regard as his predatory sexuality and his clumsiness during the Cuban missile crisis, contrast all that with Kennedy’s successes in civil rights, his creation of the Peace Corps, his advocacy for science, arts, education, his hammering of both mobsters and of Stalin clones. (The full text of his brief, uplifting inaugural address is here.) One might ask, as one considers the image of this politician, where is the contemporary counterpart to Slawinski? Or ask, do we lack either patrons or artists of Slawinski’s ability, who can create public displays of aspiration and exemplar to supplement our very ample supply, thank you, of critiques?

Our own Hieronymus Bosch

Three miles east, now that Christmas is near, is the next Niagara place to go: the Fatima Shrine, where there’s a walkable display of lights—and a monumental Slawinski mural that is Hieronymus Bosch redux, but again, a slice of time. Inside the basilica, Slawinski create the most complete depiction of a Cold War nightmare scenario you will ever see. When we were actually threatened with global thermonuclear war, we reacted with panic attacks, religious fervor, fervent spirituality, and, in Slawinski’s case, with commissioned sgraffiti depicting possible outcomes, including global inclusive redemption (that would be the portion of the mural depicting all races and creeds surviving) as well as incineration.

You won’t see it, but you’ll be quite near two historic sites that shaped your world: the place where a pre-contact massacre of indigenous North Americans occurred at the hands of other indigenous North Americans, and the place where the toxic nuclear debris from the Manhattan Project is stored. Don’t go crawling uninvited around the Tuscarora reservation just south of the Fatima Shrine, but do please head back into the village of Lewiston to see Susan Geisler’s Tuscarora Heroes Monument, commemorating the deliverance of some civilians by Tuscaroras when the British burned the village in 1813.

Heading back home to Buffalo, do choose to drive the Niagara Scenic Parkway rather than Route 104 past the Robert Moses Power Project and NIagara University, and park at Devil’s Hole either for the half or the full hike. The fit can walk the 300 steps down to the floor of the Niagara Gorge, which is also receiving some attention from the WNY Land Conservancy in its efforts to restore native plant species, and climb 300 steps back up to the top of the gorge at Whirlpool State Park.

And then do please stop at Goat Island, which is the setting of Mark Twain’s 1906 wonder The Diaries of Adam and Eve. Adam notes that the place he calls the Garden of Eden is now a park with a sign instructing him to keep off the grass.

On the way out of Niagara Falls, one can make a choice: Either continue along the river to Love Island and behold the fenced-off area that used to be home to unsuspecting working-class households that trusted local industry, or skip off to the Grand Island Bridge before facing all that. Take the first exit and go visit the brand-new West River Parkway bicycle path, which is almost seven miles of uninterrupted riverfront vistas before connecting to the roadways of Beaver Island State Park, which is a most peaceful place for walks under gray skies.

Shortly, one will have completed the loop. There is more Slawinski to visit: at Buffalo State College, at Erie County Medical Center, at Assumption Church on Amherst Street—but to understand why a Pole of the 1960s and 1970s would find his Catholicism so compelling that it infuses even his political art, stop in at Buffalo City Hall, and find that dark alcove where his Katyn Memorial hammered-copper work is installed. Katyn is where Stalin massacred the Polish officer corps in World War II. Katyn is why Poles wonder what in the hell could possess an American president ever to trust the word of a Russian.

Slawinski’s public art in Buffalo. It’s from a time when public art was unapologetically, explicitly, emphatically connected to the spirit, and to history. That was before our current renaissance, which so far is comparatively voiceless.