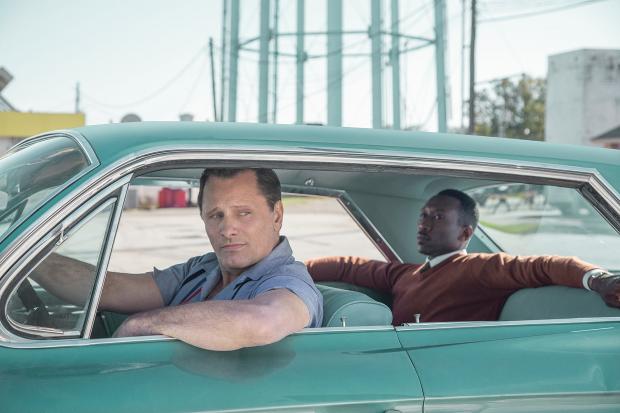 Peter Farrelly’s dramedy, Green Book, doesn’t embrace the concept of subtlety; in fact, they’re just about perfect strangers. The movie is almost as broad and shallow as one of Donald Trump’s political promises, and sometimes about as realistic. Don’t get me wrong: The movie obviously enough seeks to espouse a spirit in opposition to the nastier, bigoted dynamics of our Trumpest era. Green Book is for goodwill and cooperation, in its own rather crude, and sometimes entertaining terms.

The title comes from a “negro” travel guide periodically issued over more than 30 years into the 1960s. Since African American travelers were decidedly unwelcome in many of America’s public establishments, particularly in the south, the guide saved blacks from embarrassment, and much worse.

At its heart, Green Book is one of those mismatched buddies movies. It’s very loosely derived from actual characters and events. Viggo Mortensen (having a lot of fun as an amusing but competent slob) is Tony Vallelonga, a.k.a. Tony Lip, a temporarily unemployed and financially stressed night club bouncer who agrees to serve as a driver and factotum for a black pianist named Don Shirley (Mahershala Ali) who’s undertaking a tour of southern venues in November and December of 1962. Shirley is a classically schooled jazzman (although what we hear him play in the movie isn’t really jazz.) Tony’s a goombah who can use his fists, a loving family man in New York who lacks the personal and social issues you might expect from someone in his milieu.

As written and played, Dr. Shirley (he just happens to have two or three advanced degrees from renowned American and British institutions) is a piss-elegant, stentorian queen. He’s also a didactic nag who corrects Tony’s English and manners. Ali’s performance is mostly a fussy failure, although it’s unclear that it’s all his fault. The humorously intended individual and social disparities between these two are so overdrawn they make Neil Simon’s Oscar and Felix seem like blood brothers.

The movie tries to get a lot of mileage out of their mutually incredulous reactions to each other’s habits and preferences. But Farrelly also has a serious, inspirational purpose. It’s easy to score points off the bigoted violence-prone Jim Crow South. Yet curiously, he provides anachronistic elements and scenes. A two-cop team in ’62 Macon, Georgia is biracial, for example.

More fundamentally, he and writer Nick Vallelonga (Tony’s real-life son) make Shirley simultaneously naïve and race-conscious. It’s hard to believe a black guy from the Florida panhandle would attempt to try on a suit in a white men’s shop in the Deep South, or try to get a drink in a white bar—with probable dire consequences.

Farrelly and Vallelonga load all this with sentimental material. Farrelly ‘s best known movies—Dumb and Dumber,There’s Something About Mary—are noted for their in-your-face rudeness, but the comedic sentimentality here is of a different sort of crudeness. It’s virtually laid it on with a trowel. There’s even a climactic Christmas scene.

If you bring some holiday spirit and tolerance to Green Book, it may not be anything like the season’s worst time killer. But it’s not delivering a viable message for our troubled times.