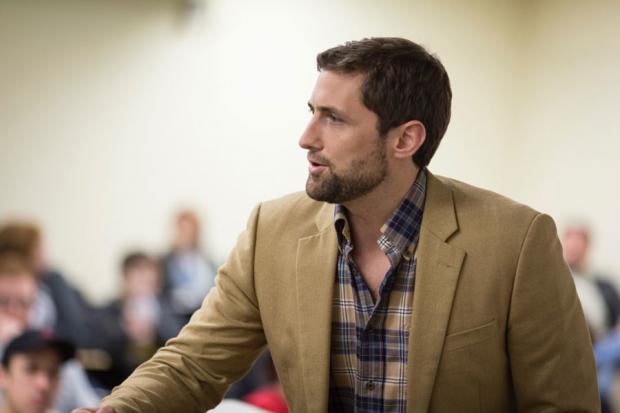 “Everybody thanked me for my service. Nobody seemed to know exactly what they were thanking me for.” —Phil Klay, “Bodies”

Former Marine Public Affairs Officer Phil Klay (rhymes with “fly”) accepted the 2014 National Book Award in Fiction for Redeployment, his collection of short stories exploring the lives of soldiers in Iraq and at home, on November 19 at Cipriani Wall Street in New York City. “I can’t think of a more important conversation to be having,” he said. “War is too strange to be processed alone. And so I want to thank everyone who picked up my book and joined the conversation.”

Some of those who’d joined the conversation had done so here in Buffalo just last month, on the occasion of Klay’s visit to Canisius College on October 21 as part of the Contemporary Writers Series, a program I’ve hosted for the past 16 years. Klay, who served in Anbar Province during the surge, spent more than five hours on campus, answering students’ questions about his book, advising aspiring writers over dinner, reading from his work at a public event to an audience of more than 200 students and Buffalo readers, taking still more questions, and signing copies of his books.

Throughout a long day, he was tirelessly generous, gracious, and modest. More than once, he proudly acknowledged his own Jesuit education, at Regis High School in New York City. He described his debt of gratitude to his teacher in the Hunter College MFA program, and to his mentor—and recent visitor to Buffalo himself thanks to Just Buffalo’s Babel series—Colum McCann. He shared some of the secrets of his own creative process, letting students know, for example, that he does some of his “writing” while biking, stopping at coffee houses to write down the sentences that come to him while riding.

More than once, Klay mentioned his disappointment that old stereotypes of veterans as damaged, crazy, and dangerous—sadly evident, he suggested, in Joyce Carol Oates’s recent novel Carthage—are still so prevalent in our culture. Such simplistic stereotypes, Klay believes, are held by those who have little personal knowledge or connection with men and women who have served. But the 2.5 million Americans who served in Iraq and Afghanistan represent less than one percent of the US population. Most of us don’t have a family member or close friend in the military. If not from our own brothers and sisters, then, if not from our neighbors, where can we encounter the truth about these wars?

Phil Klay’s book is a good place to start. Redeployment’s 12 stories are full of the messiness, contradictions and strangeness of lived life. Their allegiance is not to any thesis or political stance or ideology but rather to the experience of real men and women and most of all, to the sound of the human voice engaged in that most human activity: telling a story, performing the exacting and ultimately impossible work of finding words for the nearly unimaginable and sometimes unspeakable.

We shot dogs. Not by accident. We did it on purpose, and we called it Operation Scooby. I’m a dog person, so I thought about that a lot.

First time was instinct. I hear O’Leary go, “Jesus,” and there’s a skinny brown dog lapping up blood the same way he’d lap up water from a bowl. It wasn’t American blood, but still…

In writing workshops, we talk a lot about narrative voice (“something that begins,” Philip Roth famously wrote, “at around the back of the knees”) and about authority. There you have it, Exhibit A, a voice you trust, a voice that compels, a voice you cannot stop listening to. This is Sergeant Price, an infantryman, whose story, of those included in Redeployment, may be the most familiar. He’s home on leave but his alertness is still on orange, even at the mall: “And then you go shopping in Wilmington, unarmed, and you think you can get back to white? It’ll be a long fucking time before you get down to white.” “Redeployment” is the story, I suspect, that’s bound to be anthologized and “taught,” and for good reason: It’s short, punch-in-the-gut powerful and flawlessly crafted.

But, as Klay pointed out again and again during his time at Canisius, there is no single Iraq story. There is a chorus, as various and multifaceted, as nuanced and layered as the individuals who served. (When a number of students wondered whether Klay had considered writing from a female soldier’s point of view, he said that he had, but no woman’s story fit the structure of the book. Instead he recommended readers check out the work of Mariette Kalinowski and Kayla Williams.)

One story, “Bodies,” is narrated by a man who serves in Mortuary Affairs: he becomes acquainted with the way human skin reacts depending on whether a body is left in the sun or in water; he likewise comes to know the look of disgust with which those who do his work are regarded. Another, “Prayer in the Furnace,” is told by a chaplain—a priest and former boxer—who understands the logic of aggression as well as he does God’s mercy. Still, no training and no theology prepare him for what he hears and sees in Iraq.

“Money as a Weapons System” is a comic masterpiece told from the point of view of a Foreign Service officer charged with distributing baseball uniforms to Iraqi children. The gear comes compliments of an American millionaire convinced that the key to democracy is baseball (“Look at the Japanese,” he emails the story’s narrator at one point. “They went from Emperor-loving fascists to baseball-playing democracy freaks faster than you can say, Sayonara, Hirohito!”).

In “Ten Klicks South,” the last story in the collection, a group of artillerymen have finally fired their weapon, but on an enemy target beyond their vision. They argue about how much credit and responsibility each might bear for the enemy deaths they can only imagine. It’s complicated: It’s “a crew-served weapon,” their sergeant reminds them. Each of them, not just the soldier who pulled the lanyard, played a role. At Canisius College, Klay invited his student-readers to think about their own responsibility for America’s wars. Voters, he told them, ought to know what their elected officials do in their name.

One of the last things Phil Klay did before he left Buffalo was to inscribe a copy of Redeployment for the newly dedicated veteran’s lounge on the Canisius College campus, a gift for his fellow veterans. Personally, I think of Klay’s stories as a gift not just to veterans but to all of us willing to listen.

Mick Cochrane is the director of creative writing at Canisius College and the author of four novels, most recently Fitz (Knopf Books for Young Readers).