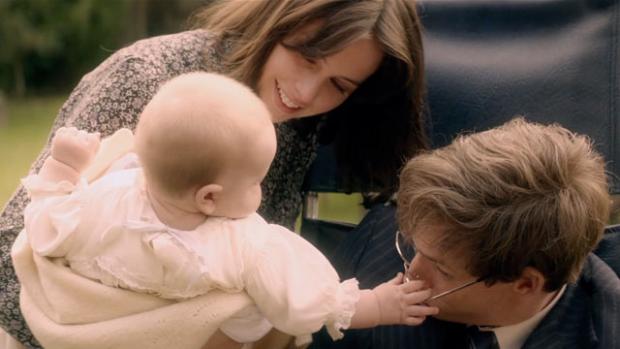 Felicity Jones and Eddie Redmayne as Jane and Stephen Hawking in The Theory of Everything.
by
M. Faust
/ Nov. 26, 2014 12am EST

Movies are great at showing people falling in love—it’s one of the things they most like to do, or that people most like to see. People falling out of love, on the other hand, is rarer. Perhaps because it’s a slow, subtle process that doesn’t lend itself to visualization. And of course it’s hardly a thing that people are eager to see.

(Movies about relationships that have already failed are another thing, led by Who’s Afraid of Virginia Woolf?)

Based on the memoir by Stephen Hawking’s first wife, Jane, The Theory of Everything (now playing at the Amherst and Eastern Hills Mall theaters) is one of the films that seems poised to be a contender in the coming awards season. Bio-pics about famous people overcoming adversity are always popular with Oscar voters especially.

But unlike the unashamedly formulaic The King’s Speech, to cite a recent example, this drama directed by James Marsh, best known for documentaries like Man on Wire, seems more certain of what it does not want to do than what it does.

There are three threads we can expect to follow: Hawking’s work as a theoretical physicist and cosmologist, culminating (at least in public awarness) in the publication of A Brief History of Time, which to date has sold nine million copies; his struggles with ALS, which was diagnosed when he was at Cambridge and over the years left him without the use of most of his body; and his marriage.

I will admit that I expected the first two to predominate. But if a movie is going to be made based on a memoir written by his ex-wife, then I guess the marriage is fair game. Jane Wilde Hawking was a student in Romance languages when they met. She was a devout Christian; he an atheist who dismissed “the whole celestial dictator premise.” But opposites attract and they married, despite his doctor’s warning once his illness was diagnosed that his life expectancy was about two years. (Why he has in fact lived for 50 years past that point is unexplained.)

That the Hawkings divorced after 30 years is no secret, and nothing you’re expected to be surprised by; it’s a standard item in publicity descriptions of the movie. Yet the script by Anthony McCarten approaches their problems with a reticence that is extreme even by British standards. Jane is supportive of her husband though his slowly increasing debilitation; that she is occasionally frustrated in her own studies and the difficulties of raising a family are hinted at in only the slightest of ways. When the breakup finally comes, it’s unexpected because you don’t feel that the groundwork has been laid. (The breakup itself, like other aspects of the marriage, has been softened substantially from Jane’s book Travelling to Infinity.)

Perhaps the filmmakers wanted to be respectful to a man who is considered one of the great scientific minds of our era. But in that case, why make the film at all? Even the irony that, as presented here, time was all that ended the marriage of a man so obsessed with the nature of time seems unintended. There are other movies about Hawking’s professional life and accomplishments. To the extent that The Theory of Everything adds anything to them, it’s to humanize him without offending anyone.

Offending audiences is something Horrible Bosses 2 doesn’t worry about in the least, except perhaps in the negative: You can imagine the script getting sent back for rewrites, asking that it be made more offensive.

In fact it’s rather less offensive than its predecessor, whose endless profanity sounded like it had been written by a team of 11-year-old boys while sharing their first six-pack of beer. The sequel was directed and co-scripted by Sean Anders, who is currently hot in Hollywood after the success of his screenplay for Meet the Milllers. (He also wrote Dumb and Dumber To.) It’s a class in sequel making by numbers, retaining as much as possible from the original (I suspect Kevin Spacey got an awful lot of money for what was probably one day of shooting) while toning it all down. Jason Bateman, Jason Sudeikis, and Charlie Day are back as the three ordinary guys who, having escaped the clutches of their hellish bosses, are now striking out on their own. But when their brilliant idea for a new product is stolen by their financiers (Christoph Waltz and Chris Pine), action must again be taken, this time in the form of an ill-considered kidnapping.

The plot is vague because the audience for a sequel presumably just wants to see more of sex-addict dentist Jennifer Aniston talking dirty (check), Jamie Foxx upending gangsta clichés (check), and the three stars doing a cross-talking routine that is funny even when the dialogue isn’t.