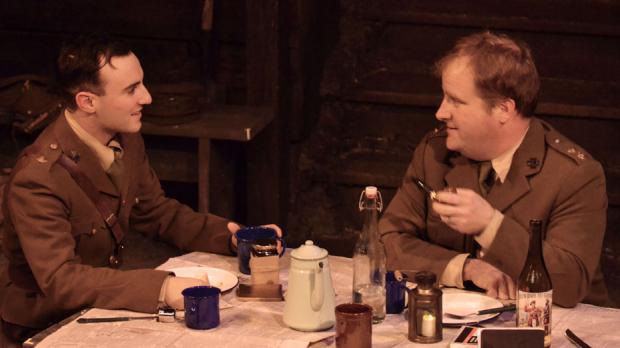 With this issue, The Public introduces our version of “The Proust Questionnaire,” a magazine personality quiz that French novelist Marcel Proust (1871-1922), author of À la recherche du temps perdu, answered when he was a teenager. Our first subject is actor Christian Brandjes, currently appearing in the World War I drama, Journey’s End, at the Kavinoky Theatre. Brandjes serves as an associate professor at Daemen College and has been seen on stages throughout Western New York.

What word would your friends use to describe you?
Smartass.

When and where were you the happiest?
Snowed in last week with my wife, Liz, and sons, Nico and Owen. It was awesome. Sleeping in, watching movies, playing games. That’s the life.

What is your greatest fear?
People.

Which talent do you most wish you had?
I would never want to be a professional visual artist; it’s one of the only professions harder to make a living at than theater. I would, however, love to be able to draw well enough to amuse myself in the odd down time, such as when I am snowed in with my wife, Liz, and sons, Nico and Owen. God, they drove me nuts.

What would you change about your appearance?
I don’t mind my big nose or my gargantuan skull, or even my bald spot. I would like to have longer legs and not have to roll all my pants into fake cuffs all the time.  It’s depressing to have to move the seat forward after anyone else drives my car, even those shorter than I.

What trait do you most dislike in others?
Self-importance and when people manipulate small-stakes situations to make others look less important. And talking behind the backs of others.

What do you most value in your friends?
Sense of humor, understanding (These qualities tend to go hand in hand.)

What is your guilty pleasure?
Beer and horror movies, preferably at the same time.

Who is your favorite fictional hero?
Heathcliff from Wuthering Heights. He never questions his own actions, dives right into whatever, and is a complete, unapologetic loony. I would like to be more impulsive and unrestrained. Without the tormenting by ghosts, obviously.

Who are your real life heroes?
My wife for her unfailing commitment to the education of our most important citizens, Dan Shanahan for the sheer bigness of his artistic vision, and Gandhi…cuz you’re always supposed to say Gandhi.

What do you consider to be the most overrated virtue?
Moderation can be taken too far and used to avoid Risk and Chance, the parents of Creativity. Chastity’s kind of a drag, too.

On what occasion do you lie?
When I’m unprepared for class. If I’m dressed well for a class, it means I’m not entirely sure what I’m planning to do. If I’m dressed like a slob, I’m confident in my preparation. That’s kind of a lie.

If you come back in another life, what person or thing would you like to be?
Assuming I’ve got another 30 years left, I would like to come back as the director of the NEA beginning in 2065, in time for the 50th anniversary of the full government funding of all arts organizations in the US.

Otherwise, the leader of the resistance during the Zombie Apocalypse.

What is your motto?
Don’t wear pants unless someone’s checking.